Freewayriding's sense of freedom took him on the road. Part Three of the series. 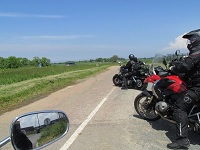 The following day's ride down to La Rochelle was just 200 km as the locust flies, more than enough in the tanks, a beautifully sunny day (I have the sunburnt nose to prove it!), great scenery and some of the best roads I've ever ridden. Seriously the French can do Tarmac! Even the few bits under construction made our native highways look shabby. Well done France on that one.

A nice easy ride. Splat! We pulled over whilst I wiped the alien that had exploded against my sunglasses off, looked like a small green eagle had hit me, yeuck, the joys of open faced helmets. Hundred yards later and we took it in turns being targets for the French insect kamikaze squadron. Again, the Axis powers looked smug behind plexiglass windshields as we suffered the worst, played havoc with my poor sunburned beak. If you've ever watched Wild Hogs, you'll have the imagery!

Pulling into a small town for lunch my stomach lurched as, yup, the only place open was a burger joint, Ronald de McDonald was wetting himself with laughter as I ranted about the curse of fast food chains ruining my gastronomic expectations, I opted for a couple of pastries instead, at least I was trying to eat native. 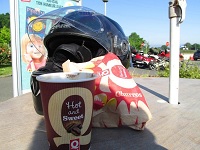 Petrol lasted well as we rode into the beautiful harbour town. La Rochelle is breathtaking in the early morning and continues to blossom well into the dusk, thousands of boats, beautiful old harbour buildings and chic bars and hotels. And they were open!

We'd treated ourselves to a two night stay here in a decent hotel and set out to see the sights and have a few well deserved drinks, no riding the following day, but we'd decided just few drinks and an early night would suit us all....well that was the plan.

A lovely restaurant with seafood so fresh (and so French we took a wild guess at what most of it was!) it must've been swimming in the harbour minutes before we arrived.

A proper drink to Fiddly's memory, then our first real meal in days, absolutely gorgeous it was too. A sunset walk around the harbour turned into a sunset forced march as we got totally lost amid the sea of masts and walkways.

When we eventually arrived back on the main drag the French gods seemed to have removed chic La Rochelle and replaced her with her wilder sister. Nightlife began early here! 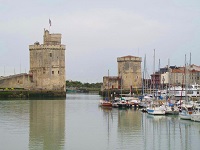 The rest of the evening was, well, let's just say we found a decent rock bar....nothing major was broken and the gendarmerie wasn't needed....and another road name for a new member - D'Artagnan , but that's another story!

A local biker, (thanks Clara), told us, ( efore we set about trying to empty the national wine reserves) that the toll roads had fuel all the way north. It was a little more expensive but the reserves were kept topped up to keep France's autoroutes running from peage to peage in this time of crisis. The worry of how to get back up north lifted, we settled into a late evening/early morning full of culture and serious debate.....

Somehow we managed to find the hotel, luckily negotiating the vast open mawed canal loch thingy that ran the length of Quai Maubec without falling in, health and safety obviously hasn't arrived here yet!

An easy day followed to let the cobwebs clear, our last supper by the harbour, I picked something that looked 'beefy and saucy' from the unintelligible menu. The charming waitress a little shocked that the stupid English bikers wanted no wine or beer, frowning as she took orders for soft drinks and water. We mimed being up at the crack of dawn to ride hundreds of miles and we didn't want another hangover! My meal arrived. My brothers nearly choked on their lemonade as before me was placed...yup another bloody burger! (although I must admit it was one of the nicest I'd ever had!)

The long run back to Caen via La Mons was largely uneventful, good fast roads, expensive petrol, millions more facial implants of the insect variety. Once off the autoroutes petrol became scarce again. We made such good time we had the luxury of four hours spare to finally visit the d day beaches and museums, get thoroughly lost a few times, panic about having enough fuel to reach the ferry , but fourth time lucky, and have supper in the port – coq au vin if you must know.

The ferry crossing too was thankfully smooth. Portsmouth resplendent as the vast naval vessels proudly welcomed the stupid English bikers home with the sun. Dawn is always beautiful but sunrise at sea is often spectacular and this one didn't disappoint.

Sadly all the motorways all the way home resembled a three hundred mile long car park, bank holiday weekend was upon us! Very slow going but we got there. God bless filtering! One fuel stop and then back to creeping homewards between rows of gridlocked angry and overheated weekend drivers.

Twenty eight hours after leaving La Rochelle we were home. The only close call was an octogenarian nearly side swiping a Harley off the road. Loud pipes save lives, you know.

As I turned off the blistering car park and waved the others onward, my bike gave a faint cough and the warning light flashed for low fuel. No worries, twenty miles to go, I'll fill up in the morning...once I'd shaved this bloody zoo off my face!