When I was a kid, I thought preachers had a Secret Book. (No, not an annotated Bible.) This book contained all of those analogies, examples, urban legends, and edifying anecdotes they used in sermons. The reason? I knew a lot of different preachers, and they all used the same stories.

Later, I figured out that they were just passing them around. Which was a pretty good trick before the internet.

Now, it is true that preachers learn how to compose sermons in seminary. They have a course for this, called Homiletics, from homily. The standard course stresses organisation and offers effective techniques for holding a congregation's attentions, and making your message memorable. So it's a lot like writing tips. Approach with caution.

They tell preachers-in-training to use three to five main points, just like an essay. Unfortunately, some instructors are still promoting the heavy use of alliteration. This leads to bullet points such as:

You get the idea.

Somewhere in the homiletics course, between the bullet points and the use of humour, etc, future preachers must learn about the use of analogies and examples. Nothing helps make an idea 'sticky' like a good analogy or case-in-point. And this works for writers, too. But be careful, please.

Here's an example: the preacher wanted to illustrate the growth of the Kingdom of Heaven. He wanted to emphasise how it spread almost magically throughout the world by the power of the Holy Spirit. He tried to think of something that grew like that, as a visual image of miraculous growth. And it was spring. And he was from the southern US. 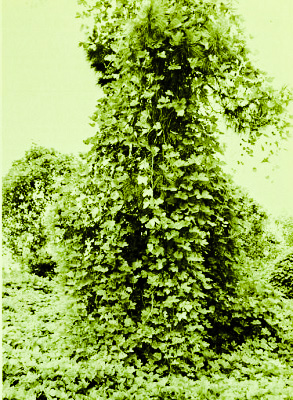 On the screen appeared…an image of kudzu.

Kudzu, aka 'the plant that ate the South' is an invasive vine that covers everything in sight, growing at an amazing rate. It's usually regarded as a nuisance. Which is why the analogy made me laugh: because, in my experience, the Holy Spirit is regarded as a nuisance by many people. The Spirit urges people to do things they might not want to do, like protest injustice, love unloveable neighbours, work for peace, things like that. And it spreads, because…well, because it's supposed to. It covers up a lot of Ugly. And it has an imperative that's part of the plan. So I'm fine with the kudzu analogy. Only…

I'm not sure everyone would see it that way. They might have appreciated a more positive image a little better. So my point to writers is, if you're going to use a bold, counterintuitive analogy like that, be prepared to explain yourself. Take the reader/listener with you.

I've just finished reading a novel by Stephen King called 11/22/63. It's about a time traveller who's trying to prevent the Kennedy assassination. Good book. In it, King uses the word 'poundcake' in an unusual way. There are two lovers. The first time they get together, he brings her a poundcake for their picnic. In their excitement, they both step on it. Ever afterwards, the couple use 'poundcake' as a lovers' code. It's a very endearing idea, and as a symbol, the poundcake ties in with the idea of the halcyon past of the early 1960s – a world where homely treats like poundcake are part of the everyday life the time traveller finds so appealing and exotic. Poundcake and its implied partner, a fulfilling sexual relationship, symbolise what's at stake for the protagonist as he makes an agonising ethical decision.

So, sure, analogies. Kudzu and poundcake. Choose them and use them wisely. If you're lucky, they will become attached in the reader's mind to the idea you want to convey. Think about Catcher in the Rye: the first question a clever English teacher will ask is, 'What is the image of the Catcher in the Rye about?' Because it's central to the way Holden Caulfield sees his life. Or, 'What is the meaning of the panache in Cyrano de Bergerac?'

Do not think about liver and Portnoy's Complaint. At least not close to dinnertime.

A brief note in closing: where do these analogies, symbols, and leit motifs come from? From your own experience, of course. You collect them as you go down the road.

So go out and collect some. Make mental notes. They'll come in handy someday. You'll use a particularly apt one, and the idea will spread like…er, like a thing that spreads quickly….