What would you if everyone you worked with suddenly disappeared?

Originally released as a mod for Half-Life 2 in 2011, The Stanley Parable is more of an interactive story than a game. The high definition remake was released on Steam in December 2013 alongside a playable Demo.

You play as Stanley, a man who has come to work in an office. He's used to recieving his work remotely and is surprised when he doesn't get any. He leaves the office and cannot find a single co-worker.

He sets out to find where they all could possibly be, starting with his first search for them and then going to see if his boss is around. 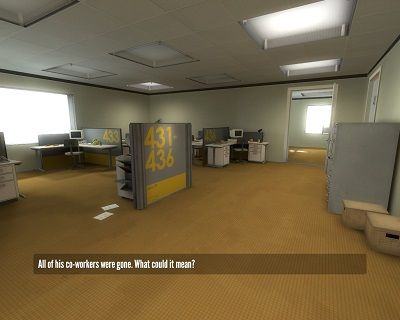 Throughout the game the narrator, Kevan Brighting, recounts and offers solutions to Stanley, but you don't have to follow them. It's quite amusing when you don't, particularly when it comes to the broom cupboard, where you can die and 'respawn' and go back in, much to the narrator's lamentations.

Enter the door on the right instead and he'll not be very happy. There are many choices to be made, some of which lead to other choices and further choices. 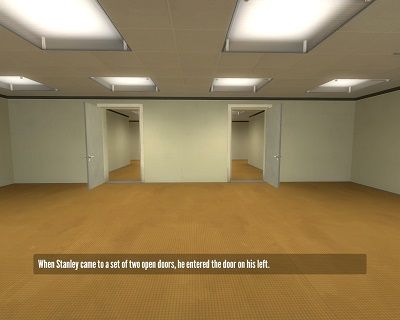 Eventually you will find the meeting room, which is similarly bereft of co-workers, and you will try and find the Boss' office, or not, the choice is yours. 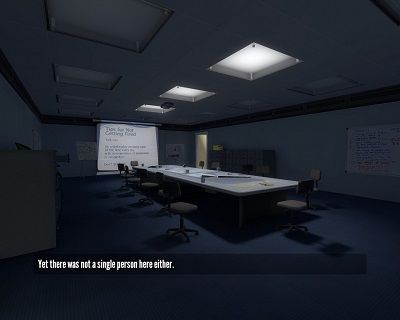 With the many and varied choices you have, come 18 different endings. So, although the game is quite short, it has loads of replay value, and that's not to mention the demo.
The demo has it's own little, lovely quirks, like the '8 game' where you can push the 8 button several times making the narrator totally despair of you for wasting time and pushing the button. 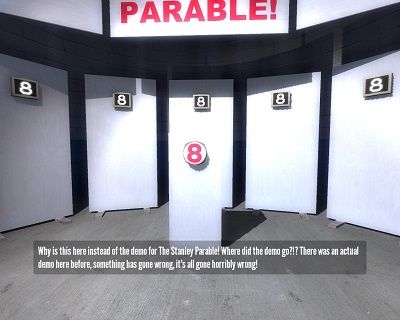 The Stanley Parable is totally silly and totally funny. Getting all of the ending will make your brain bleed real blood. It's totally worth it, though.