We're not sure whether to classify this as a January or February Create, as it deals with a home, and a great memory. We'll call it both, and thanks to Florida Sailor for sharing. 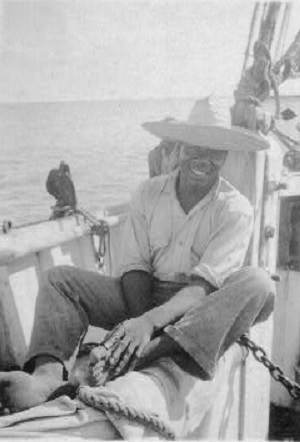 From the time I was a child I had a dream of living on a boat. When I was eleven I learned how to handle a boat under sail – now it had to be a sail-boat.

Over the years I bought and repaired several small boats. Then one day I found myself with the funds to make a down payment of a cruising sized sail boat (following the unfortunate death of my grandfather). I went to the local yacht broker, the nautical equivalent of a real estate agent. When I told him what sort of a boat I was looking for he pulled out the file for the Marbet. She was a plywood hull built over oak frames, built by two elderly couples in the city of Jacksonville, Florida.

The wives were named Margaret and Betty, and their names were abbreviated into the boat's name. The boat's length on deck was 27 1/2 feet, and her official measure put her a bit over 5 tons' burden. Under US Federal law any private vessel over 5 toms can be 'Documented' with the US Coast Guard. A documented vessel is exempt from state registration, using only her name and home port as identification. A few states (including Florida) require the owners to also display a state tax decal as well. The federal document has certain rights and obligations attached. The boat can be mortgaged similar to a house; in foreign waters it is considered a part of U.S. soil. In time of war the boat can also be drafted into military service.

At the bank closing they required a copy of the 'Abstract of Title', a form that would show any outstanding liens against the boat for repairs or slip fees. Unfortunately that form was in the Coast Guard office in Jacksonville. There was a one dollar fee to transfer it it to the Tampa office and a twenty dollar cost to wire the fee by Western Union. The yacht broker, anxious to receive his commission, drove me to the Coast Guard base in Tampa so we could get the proper form. A few days later I had the keys to my new yacht.

The next morning I packed a week's worth of clothing into my pick-up truck before leaving for work and officially moved aboard that evening. The boat was in a private marina behind a condominium complex where the former owners lived. To transfer the document into my name I was required to submit a photograph of the transom showing the name and port of hail displayed. The old name was on a 'name board', which the rules said was not allowed, so I had to apply new letters, as well as a new home port name. As I was changing the inscription the old owners came by and accused me of changing the name. I assured them I was not, but only updating it to modern standards. As I did not have a legal residence in Jacksonville, I was forced to change the home port, so I used my parents' address in Largo Florida – this small city lies across he bay from Tampa and between the cities of Clearwater and St Petersburg. In latter years this was often confused with the more famous Key Largo that was featured in the Humphrey Bogart film by the visitors walking on the pier.

I soon moved her to a public marina where there was a close knit community of those who 'lived aboard' full time, as well as those who only visited their boats to take them out, or as a weekend retreat.

Over the next ten years she was my home. There is no easier way to move to a new address than untying a few ropes (lines), going for a sail and securing them in a new slip several miles away. There is still the hassle of shifting utility accounts like electric power and telephone (we had plugs for both on the pier), as well as the inevitable post office change of address forms.

I married my wife while I was living in the Marbet. One year we had a dolphin who came in each morning to collect his breakfast from the fish who populated the water behind us. Vacation each year was as simple as picking a place to sail to.

We added a Golden Retriever dog to our crew, he loved to lie in the cockpit and chew his squeaky toys. One night we were having a community cook-out. Our dog was there with one of his toys. A woman who had recently moved onto a boat across from us looked at him strangely 'Does he play with that often?', she asked. I replied that he did. 'And you live on the boat right behind us?' I confirmed her observation. 'Here I have been telling everyone up north how I can hear the dolphins calling to each other every day.'

The time came when we purchased a house and moved ashore – but these were magic years that I would not trade for anything.