The first entry in the February Create challenge, 'Tears in Rain'. 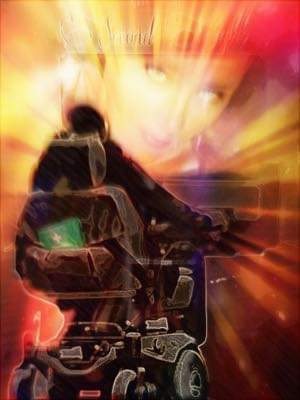 My left hand fiddled idly with the controls of my chair, the gyros hummed as the machine made rapid calculations and adjusted my position almost immediately.

Unconsciously I had, once again (much to the annoyance of my young medical team) reverted to type, I now sat legs apart and slightly extended, arms raised to chest height on the rests and my back at a familiar but nowadays rather painful backwards incline. I closed my eyes and let the position erase the wheelchair, felt the cold metal of the petrol tank on my thighs, the engine rumbling beneath me and the wind ruffling what was left of my hair.

Would this be the image? All that effort and money to show me something I hadn't actually ever forgotten?

Eyes reluctantly open, the memory and my smile faded and I was back in that damned chair. Just a very old man waiting for a special treat. Happy bloody birthday!

Yesterday I had reached yet another milestone, the big H, I was duly photographed holding up my congratulatory message from the King. As soon as the cameras went, so did the message, straight into the recycler, the man was a buffoon, much like his great grandfather. Another side of me that puzzles the staff, fiercely patriotic, proud to have served my country before the Collapse, but I never took to the Monarchy.

I dreaded this being the image, the Prince signing away our heritage. The end of a war without one shot being fired? Cowards all of them!

My birthday included the ubiquitous interview for the masses, what an achievement, one hundred years young! Typical banal questions.

"Do you remember motor cars?"

Puzzled looks when I told them I was glad to see the back of the motorised cages, but mourned deeply when the final motorcycle was scrapped.

"What's your recipe for a long and happy life, sir?"

Puzzled and shocked as I smiled into the recorder, feebly beckoning the audience closer before shouting," red wine, red meat and red headed women!"

I was warned about my disruptive and antisocial manner, a revised interview was recorded, using government approved prompt cards and I was given my present.

The ornate invitation, typed on what actually felt like real paper, was given a lingering close up. I was to join the ranks of the important few that were offered the opportunity of Second Sight.

The plush reception had displays running in a loop, hundreds of years of historically and socially important memories, plucked from the subconscious by SS, digitally enhanced, carefully cross referenced and committed to the vast data storage facilities.

My favourite was a pilot's view of the first Mars Landing. No doctored footage, no one small step speeches, just exactly what that brave woman saw as she cursed, sweated and wrestled with the controls before expertly and smoothly setting down. The first of many to land on Mars, but a true hero in my eyes!

The recording room easily accommodated my chair, the equipment adjusted from desk mounted to chair mounted in a matter of minutes. I was slightly disappointed that this wizardry looked like an old fashioned pair of opera glasses attached to a large set of earmuffs , that the real wizard, that multi-million dollar Oz still lurked behind the curtain.

I was told to look at the small red dot and try to relax, this would take only a few minutes. I'd had more excitement on my last opticians check up!

Put in that position, one does try to bring the most important memories to the forefront. The SS machine actually didn't care, it rooted out those memories, those jewels floating in your memory, no matter how misplaced.

The One Great Moment in anyone's life captured, like a magician pulling your card from many many decks. Flawless no matter who the subject happened to be. Just last year SS had managed to retrieve a first hand account of the signing of the New Declaration of Independence from the thoughts of an ex-President who had been in a coma for six years following an assassination attempt. Flawless indeed was the great and powerful.

So what would my legacy to society be? I wracked my brains for memories, snapshots of importance I had stored for a century.

One witnesses so many events, which ones turn out to be important?

I had swam with dolphins in the Gulf of Mexico. Both now long gone from the planet.
Seen lions hunting on the Masai Mara, just six of these magnificent beasts remain, all in captivity, the Mara now a huge industrial complex.

Then too the sporting and musical talent I had witnessed, Giants in their time, from Bill Shankly and Kevin Keegan to Barry Sheene and Carl Fogarty, famous sporting moments of my youth ready to be devoured by history.

Rock concerts, like football and motorcycle racing, long ago outlawed on health and safety grounds, lived on and were frequently replayed in my memories – Ozzy Osbourne leaping wildly into the air in a spray of spaghetti suit fringes and brandy, meeting a young Lemmy from a new band called Motörhead ( SS would undoubtably be able to recall details that whisky had managed to delete from my mind!).

First hand recollections of steamy venues, the heady pall of smoke dimming the stage lights, thousands of leather clad fans screaming along to War Pigs, mesmerised by the rock gods before them.

Or maybe the darker memories would suit the scientists, reliving some of the events and interviews with those who used to live on the fringes of society. Mans inhumanity to man was always an attraction, violence and madness always popular, a modern day Bedlam slept fitfully in a dirty bed of memories I would rather not recall.

Then too there's great acts of heroism and kindness I can recall, those giving their all, regardless of personal safety to help others. Maybe those memories would serve to remind this stagnant, sterile world that there was once a wild, untamed side to humanity – a side maybe better off gone the way of the dolphins?

"All done Sir!" The overly toothy smile led me back to the waiting area, twiddling with my gyros and looking back over the things I had seen.

Some twenty minutes later I was invited into a private viewing room, dimmed lighting and a huge screen.

This was My Moment of Forever, the memory most important to my existence. The sum of everything I had ever witnessed ; downloaded, sorted and ranked.

I held my breath as the screen came to life, the Second Sight logo melting away.

I let the tears come as the smile on my wife's face filled the screen, the glint in her beautiful eyes playful. Soft light fell across her features as she leaned in to kiss me. Lips parting as she whispered, " I love you!"