Around the World in 30 Ways 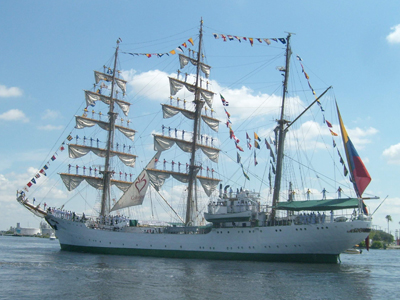 Day 5 was mostly more of the same, until late afternoon when we sailed up the Penryn River and approached the marina in Falmouth, England. I was now put in the hands of Colin, who explained that the yacht would not be docking in Falmouth.

"How will I get there, then?" I exclaimed.

"In a row boat. Don't worry, it's not more than couple kilometers. Your luggage will be with you, and I'll handle your passport and room arrangements."

Colin was a pleasant young man who had a small software company and had started in public relations. He mentioned that he was 3,000th in line for the Throne at birth, but had been bumped down by several hundred since then.

As I rowed toward Falmouth, I was thrilled by the prospect of staying in this picturesque town with its charming buildings climbing a low ridge. Hopefully my room would have a view of the river. Alas, I soon learned that I would be staying just over the line in a town not even on the map.

"You will stay at Fusty Towers, which is run by Lady Diane Blotchingsley, my cousin, " Colin said as we walked through Falmouth. "She was married to Lord Blotchingsley, whose ghost allegedly roams the towers." At one point I thought I spied Scribbles in the street about 50 feet behind us, but whoever it was ducked behind a tree.

Fusty Towers occupied the middle ground between run down and dilapidated, though Lady Blotchingsley gave a warm welcome and assured me that the roof did not leak. I climbed poorly maintained winding stairs, and was initially delighted to find a well-appointed, commodious room. Then I checked the view from the windows, and saw Dark Satanic Mills Museum on one side, and the ruins of Blotchingsley Castle on the other.

"We'd like to restore the Castle, but we've no money," said Lady Blotchingsley wistfully, her accent and features somewhere between Julie Andrews and Helen Mirren. "Anyway, thank heavens for American tourists like you. The locals don't care for this place at all."

"Because of the ghost?" I wondered.

"Well, no, and that's exactly the problem. Dear old Duncan's ghost goes around saying "Millennium ham and beans" or "Otters dance on my thumbs, on my thumbs," none of which makes any sense. The little kids would *love* to have him do something scary, but he's more the inappropriate sort."

"Well, nothing lewd, but he'll pick his nose or belch, which annoys the parents, so they yank their kids out of here."

"News from Buckingham Palace?" I asked.

"No, I've been bumped down one more notch in succession to the throne."