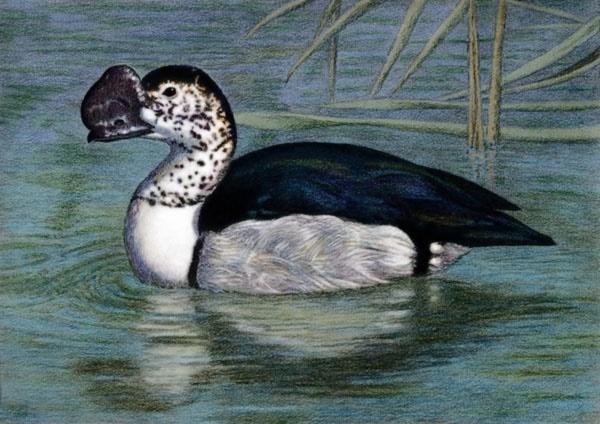 Here I have for you a beautiful and unusual bird! It is a male Comb Duck, Sarkidiornis melanotos, also known as a Knob-billed Duck, in its breeding plumage. Of course its most distinctive feature is the huge, fleshy comb or 'knob', on top of its bill. This is only present in the male … the female has a simple, duck-like head and face, with small black speckles. She's also much smaller than the male. Furthermore, the male's comb grows significantly in size during the breeding season. It is used in display, as I'll describe soon. The male also gets a yellowish tinge to his face and flank feathers during the breeding season.

The comb duck is one of the most widely distributed bird species in the world! These goose-sized ducks are found in most of South America, in sub-Saharan Africa, on the island of Madagascar, and in Southeast Asia. They're only missing from the colder regions of the world, and from Australia. This kind of distribution, based in the warmer regions of the world, is called 'pantropical'. Several species of plants are known to occur like this, but it is rare among birds – but another duck species, the Fulvous Whistling Duck, has an almost identical distribution, while the White-Faced Whistling duck occurs in Africa and tropical America, but not in Asia. It's not known why these ducks, amongst so many other duck and bird species, are distributed like this. The African, Madagascan and Asian forms of the species look like the one in my picture, while the male of the South American form has glossy black feathers along his flanks – the females look the same. Everywhere it occurs, the comb duck (the male especially) is unique and easily identified. Even in flight, the male comb duck can be recognized by the comb making his head look twice the normal size!


Ducks of the Trees

Well, not completely! This duck is indeed found for much of the time paddling in the water or resting or walking about on the shore. But it is quite at home in the trees, for a duck. Some of its time it perches in trees – which many ducks don't do much or at all. But mostly, it nests in trees! This habit it shares with the Wood Ducks of America and the Mandarin Duck of Asia. Comb ducks nest in holes in trees. Because of their size, these holes must be large, and they are therefore restricted to regions with large trees. Breeding trees should preferably be close to water, but in some cases they nested in trees as far as 1 km (0.6 miles) from the waterside. They've also been seen using holes in ruined buildings, or taking over the nests of other large bird species. The females alone incubate the eggs. When the ducklings hatch, fluffy and open-eyed, the female leaves the nesting hole and flies down to the ground. There, she calls for the ducklings, which then jump out of the hole in response. They show no fear of heights and are very light and resilient, bouncing off the ground as they touch down. Here is a video showing this behaviour in another duck species, the above-mentioned wood duck . Once on the ground, the ducklings walk and swim with their mother until they fledge.


Denizens of the Tropical Wetlands

Because of their dependence on trees as well as water, comb ducks tend to be found in pans, marshes and floodplains in the midst of tropical woodland and savannah. These habitats are mostly seasonal, and dependent on heavy rains. For this reason, comb ducks tend to be nomadic, flying sometimes vast distances in search of suitable habitat. In any specific large wetland region, such as the Nyl River Floodplain near where I live, or the Okavango Swamps, they occur in large numbers in wet years. They are quite gregarious, but the males and females often segregate themselves into separate flocks. To some degree they make use of artificially created ponds and lakes, especially when other wetlands in a region have dried up.


These ducks can appear lazy! They spend much of the day just perching or sitting around. They eat mostly in the morning and evening. They hunt for small aquatic creatures, but also eat plant foods such as pond weeds and the seeds of water lilies. They also graze on the banks of ponds and lakes, stripping off the seed-heads of the lush grass.


At the onset of the rainy season, the males start staking out territories. The combs of the males enlarge, as I said above, and they engage in displays to impress the females. They often display in the trees. The male approaches the female with a sideways step, showing her his profile and bowing his head to draw attention to his huge comb. He also flicks his tail and fluffs up his glossy wing and back feathers. He may also approach her in this sideways-manner on the water. It often happens that more than one female chooses the same male. The male's duty ends with copulation; the female does the rest. She flies out to search for a good nest, incubates the eggs alone, and raises the ducklings by herself. Sadly, many ducklings are lost to predators before they can attain adulthood.


Today, comb ducks are still numerous, despite being hunted in many regions. With their wide distribution and presence in many nature reserves, they are not in immediate danger of extinction.