The German Bath Train in World War I 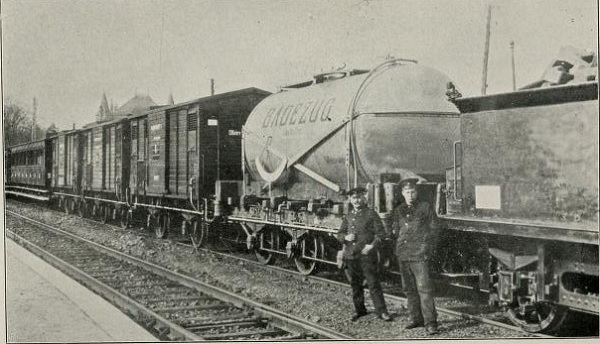 From War Chronicle: Soldiers' Letter, Pictures of the War, 1915.

1 hope you got my last letters witlhall news. To-day I will tell you of something, of which I am sure you have not already heard.

The bath-train is one of the newest of the many admirable arrangements, which the army administration has made for the comfort of our warriors. One of these trains arrived for the first
time at tlie theatre of operations of the . . . army and caused general admiration and excitement among the troops. The Director of this train is a ccnnpatriot of ours, the wellknown scientist and archaeological Director from Württemberg, Professor- Goessler: the inventor and builder of this moveable bathing institute is also a Swabian, Engineer Zimmermann from Nurtingen. Latter, who is in a field telegraph section, improvised the train in four weeks, assisted by
six men, who had been at tlie front, and in spite of this short space of time, brought it to such perfection, as is proved by the number of shower baths that can be had in one day (900). You will understand that I cannot ex])lain all the different useful and technical arrangements. Besides the shower baths, there is a space allotted for warm baths with hot and cold showers for officers1.

The train consists of a Belgian locomotive, which has been characteristically named 'Nixe' (Nymph), an I8 cbm. water tank carriage, taken from a French distillery2, three Belgian goods carriages, which have been transformed into so many clean shower compartments, and a passengers carriage, which serves as a dressing room with separate compartments. Finally the service carriage, which
offers a warlike and modest abode for the professor and engineer, as well as their attendants. The whole train is heated throughout by steam.

The commander of the place had hardly communicated the arrival of the 'Nixe' and her suite to the troops, who were enjoving two days' rest here from the trenches, or lying in readiness, when the first troop of bathers started to take advantage of the situation. Our Archaeologist has the men advance in two rows, divides them into groups according to the space in the dressing-
rooms and after a few minutes about 45 very fieldgrey 'Adams' hop into the shower carriages, which are coupled something like a D-Zug3 (Corridor train). The intervening spaces are nicely screened off. The men take their places under the showers, which are arranged in double rows, and just have time to admire the clean white enamel of the walls and ceiling and the clean wooden grating under their feet, When the hath attendant gives the mechanic a sign by pressing
an electric bell. Water of a temperature of 38°° now flows freely for one minute, after which it is turned off for 2 minutes, during which the process of soaping is gone through, and at the end the shower is turned on for three minutes, not without many a merry, and now and then strong expression being heard. The single phases of the bathing have been tried and found sufficient; in three days 2500 men could be freed from their winter crust contracted in the
intrenchments.

How much this arrangement is appreciated, can be seen bv the C(mtented grins on many a bearded warrior's countenance, or expressions such as: 'That was the best of the whole war,' or 'I
had begun to think that J should have to bring home all the dirt of the last eight months.' Up to this, the troops in the halting-stations (Etappenorte) were the only ones, who could now and
then enjoy a bath; but the bath train fulfills a pressing hygienic need of the troops in the real front, bringing them comfort which is greatly appreciated.

Now the bath train has left for the next station situated at a distance of 6 kilometres, and already many are looking forward to its next visit here, which will l)e in three weeks. Then our professor will again begin his fight against the 'Patina,'" of which he is a great enemy in warfare; it is only in civil life and in an archaeological direction that he finds the existence of patina justified.

Heartiest greatings from your brother Fritz.

1Why officers in particular need cold showers is something we don't even want to get into. Particularly if a Swabian thought of it.2They were probably wasting it on Calvados.3This is apparently what makes a D-Zug a D-Zug. Now, did you ever know that, Germans? I didn't. All I knew was that a D-Zug was slower than an InterCity train.