The solution to an old musical comedy conundrum, and an insight into military 'humour' of the First World War.

The moment your son leaves the house,

Does he rebuckle his knickerbockers below the knee?

…Is he starting to memorize jokes from Captain Billy's Whiz Bang?

O-kay. Obviously, Captain Billy's Whiz Bang was dangerous stuff. Like Playboy, maybe. But what's the story behind this periodical? Well, for one thing, its mention is an anachronism in The Music Man, the musical quoted above. The saga of bandleading glory in Iowa takes place in 1912, but Captain Billy's Whiz Bang is a post-World War I publication, first produced in 1919 by Captain Billy Fawcett of Robbinsdale, Minnesota. Captain Billy, a resort owner, founded the famous Fawcett Publications magazine and comic empire on this little humorous magazine he first brought out to amuse his fellow WWI vets.

What's a whiz bang? It's a very loud artillery shell. What are these jokes? Embarrassing. But hey, it was a long time ago, and it was all meant to be in fun. As Captain Billy said in the 1920 Annual quoted here, 'There will be 100 laughs for the service man and 97 1/4 laughs for the civilian. We will give the soldier, sailor and marine the benefit of two and three-quarters percent because we believe he is fairly entitled to it.' So there you have it. Iffy jokes – racy for their time. Some people thought Captain Billy lowered the tone of modern civilisation. Others enjoyed the laughs. We probably find them quaint. But here's a sampling. (Prof Animal Chaos, take notes.)

Dear Captain Billy – I am 15 years old and have a sweetheart who is just 18. He owns a flivver and wants me to go riding with him. Should I? – Lizzie. 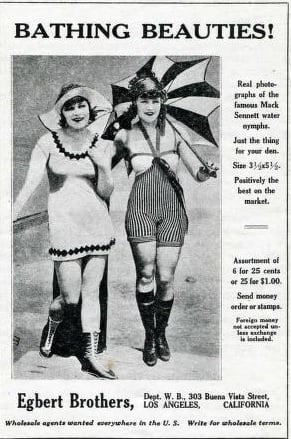 Dear Captain Billy – I have a girl friend who insists on writing to me and demanding an answer. What shall I do? – Charlie.

Tell her to enclose a stamp.

Dear Captain Billy – My husband is going out with another woman all the time. What can I do to keep him home nights? – Mrs. Brown.

Take the other woman in as a boarder.

Dear Captain Billy – I am a young lady attending a church college. Do you think it would be all right for me to wear skirts 15 inches from the ground. – Marie.

That depends on your height. II you are six feet tall it would be all right, but if you are only 29 inches "tall", Not Yet Marie.

Dear Captain Billy – What would you call the unoccupied side of an old maid's bed? – Simple Susan.

Dear Captain Billy – My daughter has a sweetheart who just got back from France. He talks to her in French and says: "Villa vouz promenade," or something like that, and then they go to some park. What does that mean? – Anxious Father.

That's all right, old man. Your daughter's sweetheart was only asking her to take a walk.

You are hereby referred to any soldier who will tell you its principal usage is in the manufacture of high explosives.

Dear Captain Bill – What's worse than a cow with the cooties?— Hi Ball.

A horse with a buggy behind.

Dear Captain Bill – We are organizing a new lodge in 'Frisco to be known as the "Ancient Order of Modern Cavemen." Will you kindly suggest a motto for our lodge? Yours truly – Rough on Cats

Dear Captain Billy – Why do they use castor oil in racing automobiles and aeroplanes? – Eunice.

To make them run, of course, Eunice.

Ed note: Stop groaning. It's disrespectful to your ancestors. Oh, you want more jokes? De gustibus, and all that, but here you go, enjoy. 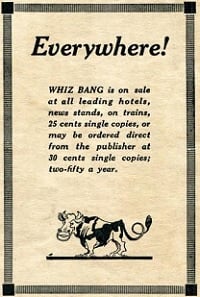