The Ghosts of September 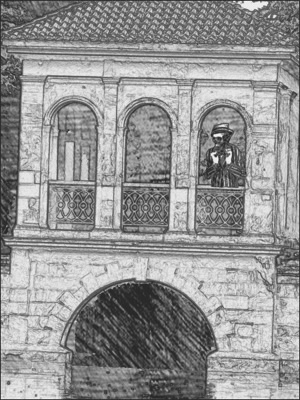 Thanks to Sasha, I had a really vivid dream last night about the local parks of my childhood.

Vivid as in remembering how the paint peeled off the railings, the railings that had been bent at one time or another to allow access to the old boating pavilion.

Whether prised apart by accident or intention, I recalled the exact shape of those bent pieces of metal, a top heavy diamond, the right hand railing overlapping its true neighbour. A trap for young fingers as we stepped up and through.

Hands touching cold metal, the flakes of modern yellow exposing pink and then green paint, red lead undercoat and finally down to the dark iron, glassy smooth, worn to a dull gleam by countless bodies squeezing through for a peep at the forbidden lakeside harbour.

Legend had a jilted lover, murderous and remorseful, suspended eternally over the lake, the creaking rafters echoing the rope's swing down through the intervening years.

We trembled as we slid down the muddy bank, hoping we would - but wouldn't - see the swinging phantom, dressed up in ancient Sunday best, a decaying Dick van Dyke pendulum, all dancing penguins and Jolly Holidays.

The council at some point must have become bored with re securing the corrugated sheeting that accompanied various notices of demolition and impending collapse. Graffiti and empty beer bottles surrounded the gaping makeshift entrance, jagged metal welcoming the brave, the curious, the addicted and reckless alike.

Disappointment and relief when the scariest things in evidence proved to be broken glass, a dead moorhen and the foul smell of the scummy water, trapped in the eternal twilight beneath the boathouse, cigarette ends and crisp packets slowly dancing on the thick tide of brown foam.

Inspecting the three long rotten moorings that pointed skeletal fingers out through the chain link towards daylight. Looking up for the fabled noose.

Then above our heads, sharp heeled footsteps on decaying boards, dust released into the twilight, the unmistakable angry murmurs of a couple arguing.

We squinted up into the dust, young eyes trying to see between the cracks, half expecting red and white stripes and straw boater bedecked skulls to be peering down at us.

A loud thump from above; a body hitting the wooden deck no doubt. Two young boys giving way to giggling panic and sprinting from the murder scene.

Lungs aching as they fled homeward, passing the hills adorned with carefully placed rocks, big enough to tug at any child's imagination. Not taking in those carefully shaped like pianos, wigwams and thrones, even though we knew exactly where they were to be found amidst the seemingly haphazard jumble, could point out their carved initials in the dark.

Up over the hills, eroded soil making tree roots into uncomplaining steps. Into the rusty kiddies playground, squeaking chain swings mimicking the happy squeaks of their passengers. The great wheel of the metal roundabout being pushed by eight or ten kids, groaning into motion as, one by one, they boarded, only the bravest prepared to run at full steam as the beast awoke.

Arms dragging from sockets, legs threatening to give way. Scabby knees the medals of honour for those who sacrificed all for more speed, concrete and gravel dispassionately soaking up blood and tears.

Down the path, not noticing the grown ups huddled around the grey prefab hut that served as meeting point and shop. Open only an hour or two per week, gaudy posters advertising ice creams and sweets that were never in stock; the counter adorned with oxtail crisps, warm pop and penny sweets. The back shelf boasting a faded photo of a German plane in the lake and a glass full of 'loosies': cigarettes sold one by one for the many locals who couldn't afford a pack.

An alley of conker trees and broken Tarmac pathway, skirting the chained up public toilets near the cricket club, empty of white and willow since the onset of September chill.

Touching the ornate sandstone sentinels that once marked boundary tracks. Ducking through yet another well plotted hole in the chain link fence, over the gravel tennis courts, nets already in hibernation.

The creaky gate opening out onto open flat greenery.

Our Wembley, Anfield, Goodison or Prenton Park depending on which kids provided the ball. A few wet jumpers still marking solitary forgotten goal posts, no doubt paid for by clouted ears, reminders of a summer holiday painfully chopped off at the knees by impending term time.

Slowing to navigate the few cars on the main road, the driver of a new Cortina flicking a fag at us, reluctantly slowing for the new zebra crossing.

Then racing down hill into the familiar safety of the terraced street. Catching our breath on the low front walls, shiny nubs of metal mourning the memory of railings hacked off at the roots, sacrificed to make Spitfires and Tommy guns.


Grinning at each other before farewells and heading in for tea, lamb stew from yesterdays roast wolfed, cross legged on the carpet waiting for the telly to warm up, already planning the ghostly tales we would be telling for 'what I did in the summer holidays' at school tomorrow.