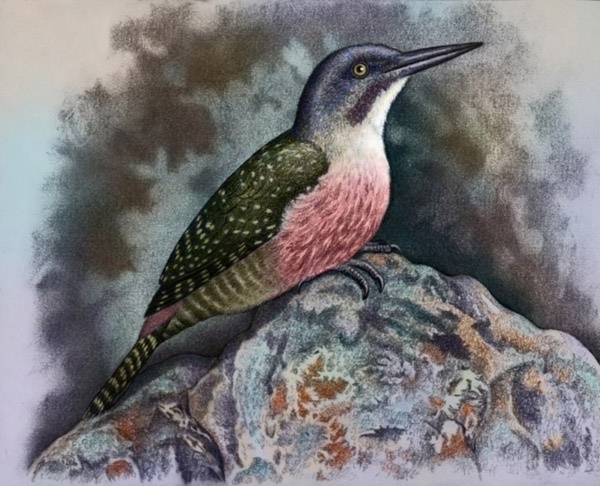 Here is another addition to the list of critters with inappropriate names! This is the Ground Woodpecker, Geocolaptes olivaceus. It should indeed be called a groundpecker, for that is what it does. But the problem is, it is a very close relative of the other, proper woodpeckers, and indeed is not different from them in general appearance, call and habits – except for the fact that it lives in treeless environments and thus excavates soil instead of wood. It is probably the most terrestrial of all woodpeckers. A few of the woodpeckers called flickers, found in the Americas, have also become highly terrestrial, but they tend to still at least make their nests in trees, which this species does not. The similarity between the ground woodpecker and the flickers is due to independent (convergent) evolution … apart from being woodpeckers, they are not closely related at all.

This species is the largest of Africa's woodpeckers, but this isn't saying much! Africa for some reason has a rather poor diversity of woodpeckers, and none of them are big and spectacular like the Pileated Woodpecker of America and the Black Woodpecker of Eurasia. Most African woodpeckers are about thrush-sized, and the ground woodpecker is only slightly larger than this, about the size of a collared dove.


The ground woodpecker is also not very colourful. It lacks the red patch on the head which all other African woodpeckers have – apart from the females of a few species, and the male of the Golden-Crowned Woodpecker which has yellow instead. The only decorations the male ground woodpecker have, is a pinkish belly, rump and malar stripe (at the corner of the bill). The female lacks the malar stripe and is a bit drabber.


Avian Ant-eaters of the Barren Lands

Many of the world's woodpeckers have become specialized for eating ants. The ground woodpecker is one of these: it raids nests of ants, eating the workers as well as ant eggs, larvae and pupae. It inhabits rocky, hilly country, ranging from high mountains down to sea level. It reaches the northernmost part of its range in the province of Mpumalanga, down to the Western Cape Province in the South. The terrain it prefers is wild and jumbled, but mostly treeless, ranging from dry sub-desert to cold, rainy uplands. It avoids very hot regions, though, and needs access to water for drinking and bathing.


These woodpeckers hop around amidst the rocks and ravines, often forming small groups, six birds being typical. They still have the typical woodpecker feet, with two toes facing forwards and two facing back, that in the other woodpeckers help them to climb up and down tree trunks and branches. The ground woodpeckers can clamber about the rocks with agility, and will hide behind boulders when feeling threatened. They are wary, and each group will typically have one bird at any time acting as sentry, warning the others of potential danger. They feed by probing crevices with their bills, searching for ant nests. When they find one, they peck away the rocks and soil to open it up, then shove their beaks into the soil as deeply as they can. Like other woodpeckers, they have very long tongues which they stick out and manoeuvre around the tunnels of the nests, the ants clinging to their sticky saliva. They flick their tongues in and out of their mouths, but this can't be seen from the outside, the only give-away being the flicking up and down of their tails as they stand head-down over the ant nest.


While the ground woodpecker prefers to forage in the soil, it will on rare occasions peck wood … but then, only on fallen or dead trees and branches. It will occasionally perch on low bushes. But that's as far as it goes! It genuinely seems to not like trees! If clambering about a dead tree, it will not cling to the underside of branches like other woodpeckers do. On the ground, it usually moves by hopping, but sometimes by walking. These woodpeckers forage quite efficiently: they only need a third of the daylight hours to get all the food they need. They spend a good deal of time perched prominently on boulders, especially on cool mornings, basking in the sun to get warm. Apart from ants, ground woodpeckers eat small numbers of termites and occasionally beetles and other insects.

Like their ant prey, ground woodpeckers nest in the soil. They breed from late winter to early summer. The male and female is sometimes helped by a third woodpecker, probably an adult offspring, in pecking out the nest holes. They use steep earth banks, quite frequently road cuttings, where apparently they don't seem much disturbed by traffic. The nest consists of a tunnel, up to about a metre/yard long, with an expanded chamber at its end. They use these as sheltered places to roost as well as for nesting, and one nest may be used for many years. After mating, the female lays two to five eggs in the nesting chamber. The parents, and the helper if there is one, share feeding and incubation duties. We still don't know exactly how long it takes the chicks to hatch and to fledge.


The ground woodpecker is almost entirely restricted to South Africa, only being found in Lesotho (which lies within our borders) and marginally in Swaziland, which is mostly enclosed by our borders. Because it inhabits remote, rugged terrain where there aren't many humans, it is fairly safe, but because of its overall small population, it is considered near-threatened.