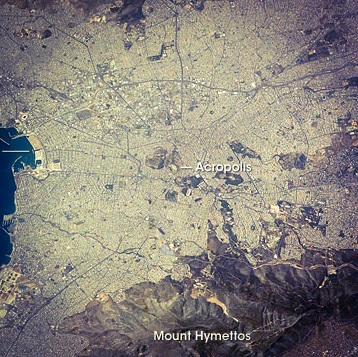 It was a bright, hot September day when we first saw it: a cracked two-storey box with a flat roof, listing slightly from earthquake damage. Wrought-iron front door downstairs, wrought-iron balcony upstairs, the whole thing exuded an antique allure. I knew immediately that I wanted to move in. Like, now.

'Do you know if this house is for rent?' I asked a passerby. He looked at us suspiciously and wanted to know why I asked. 'We want to live here.'

The man looked from us to the wreck. 'Γιατι?' Why, indeed? When we got inside, we knew why. It was the floors.

Besides huge windows that let in the Athens sunlight when the shutters were open, the rickety house offered few amenities beyond ceiling fans. True, there was a kitchen of sorts, next to the little bathroom on the flat roof. It was a 'kitchen' because it sported a square marble sink which we suspected had been installed by Socrates on an off-day, and a few kitchen-like cabinets. But there was no stove or fridge. The bathroom offered a toilet and tub with water heater. But the floors made up for any other deficiency.

Stone, inlaid with large square tiles glazed in intricate patterns. An elaborate, bordered kaleidoscope. I could stare at them for hours. The magic floors covered the landings and the living and bedrooms on the first floor, where we lived. The floors were the gateway to mystery. I knew they probably weren't that old – maybe a hundred years or so – but I was fascinated nonetheless. We took the place, a steal at the equivalent of fifty dollars a month.

We furnished our palace with cast-off oddments – ragged sofa, chair, bed – we picked up from a very dodgy character whose large supply of beds made us suspicious as to his day job. The best piece in the house was a large table, left behind by a previous tenant because it was so hard to move. The table was old, but sturdy and decorative. We covered it with a checkered oilcloth and a vase that was usually filled with anemones. Winter heating was by portable propane stove, and we bought a Soviet-made stove/oven, about the size of a large microwave. As long as we didn't want to do stovetop cooking and roast a joint at the same time, the device worked beautifully, and its sturdy tank-like metal frame put those effete capitalist appliances to shame.

The only problem with the stove was not actually the stove, and not the fault of Collective 42, or whoever assembled the thing. It was not even the fault of the old house, which had withstood time's ravages pretty well. It was the fault of Geia, the Earth Goddess. The last earthquake had left the kitchen with a distinct list, so that one side of the oven was higher than the other when it stood on the built-in shelf. The problem became apparent when you baked a layer cake. One side of each layer was thicker than the other. I compensated by turning the top layer around. The result was satisfactory until you cut into the concealing icing. As it turned out, Greeks hated my layer cakes, anyway. Not sweet enough. Ditto for the pies. For the Hellenic sweet tooth, it was baklava or bust.

That magical house provided four years of fun, instruction, and inspiration. As laundromats were non-existent, we threw some Eureka washing powder into the tub along with the clothes, trod them out barefoot, singing lustily, then hung them out on the roof, where they dried quickly in the sun and wind. Ah, that roof: a place to sunbathe by day, and stargaze by night. A patio for grilling and holding parties. A vantage point from which to view the ancient, ramshackle city. A location for meditation.

The other day, I was clicking through Google Maps' Street View. I took a notion to look up places I had been – do you ever do that? – and homes I had lived in. The result is not always pleasing. My elementary school is looking great, it's an 'academy' now, and the house we lived in has had its carport extended to cover the current owner's boat. But the house where I spent my teen years was unrecognisable. What would possess those people to paint half of it blue? And what happened to the porch the bunnies lived under? Had they no decency?

The biggest disappointment was Athens. I had half expected it, but it still came as a shock: not only was the house no longer there, but the entire block had vanished. Instead, there was a sad little gravel parking lot. Athens may be an ancient city, but it reinvents itself constantly, rather like New York. It's an endless palimpsest of dwellings and commercial ventures. I stared at the webpage in dismay.

And then it hit me: the house still exists. In my memory palace. I can go there whenever I like – in fact, I do it all the time. Every thought I had, every experience I accumulated, during the four years when I lived in Athens, it's all in there somewhere, keyed to that lopsided house. Elektra throwing a pan of water off the balcony to stop that tom cat quartet at two a.m. (They just moved across the street and started again, smugly.) Ducking off that same balcony to hide from the sudden summer hailstorm. The trail of feathers that led from the roof, down the stairs, and under the bed…and the fight Elektra had with Niki the cat over that pigeon…involving a broom, and some cussing in human and cat…

And every creative thought and spiritual insight I gleaned during those years. It's all there in the space made by that house and the convoluted pattern of its floors. The object itself is less than a memory – unlike the Pyramids, it has not withstood the ravages of time and the pitiless indifference of the wrecker's ball. The Parthenon and other Athenian wonders stand, but our old domicile is gone. Yet unattached from the mere material, that house lives on in the akashic realm created by our memories. It's part of my memory palace. And now, because I've told you about it, it's part of yours, too. Just a little bit. 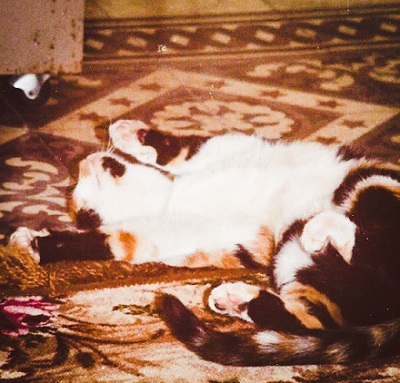