Future wars may happen in the future, as Criswell might have said. But we hope they will not happen like this.
Star Wars, this isn't. 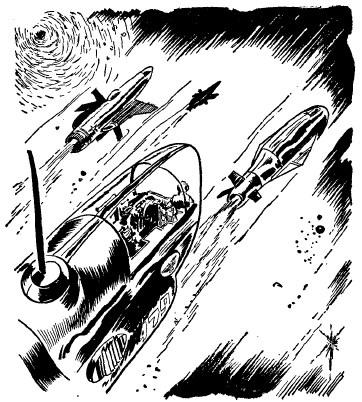 "Never mind, Manning!" shouted Quent Miles as he jumped past Roger's body2. "We've got to find Corbett. Take the starboard ladder; I'll take the port. Search all the way aft to the exhaust tubes3 if you have to!"

Ross nodded quickly, hefted his ray gun4, and moved down the opposite ladder.

Tom watched both of them come down like twin devils5, hands holding the ray guns as steady as rocks6. The cadet hid behind the open door leading to the lower cargo holds. Ross was the nearer of the two, walking like a cat7, slowly, ready to spring or fire at the slightest movement. Tom quickly saw that if he jumped Ross, Quent would be on him in seconds. His only chance lay in their passing him, giving him the opportunity to return to the control deck and search for a ray gun for himself8. And if that failed, at least he could call Commander Walters9.

Ross crept closer. Tom crouched tensely. Should Ross see him, Tom would have to make an attempt to knock him out and get the ray gun before Quent could do anything10.

"Careful, Quent!" called Ross as he moved toward the open hatch.

"You too," replied his brother. "This kid is plenty smart11."

Tom breathed a silent prayer12. Ross was now opposite the door. Should the black-suited spaceman13 decide to look behind it, Tom would be at his mercy.

Ross stopped beside the door and hesitated a moment14.

"Hey, Ross!" Quent called, and Ross turned away from the door. "I think I hear something down inside the hold. Slip down the ladder a little way and cover me. I'll go down inside and look around. He must be down here somewhere, and if you guard the door, he can't get out."

Ross grinned. "Like flushing quail in Venus jungles15," he said, moving away from the door and down into the hold where the lead boxes filled with uranium pitchblende were stored.

Tom could scarcely suppress a loud sigh of relief at his narrow escape16. After a moment he peered cautiously around the edge of the door, and seeing the way clear to the control deck, ran back to the ladder. He paused at Roger's inert form and bent over, his lips close to the paralyzed cadet's ear17.

He patted the blond-haired cadet on the shoulder and raced up the ladder to the control deck. Once inside, he barred the door to the rest of the ship and began a frantic search of the many lockers and drawers. But it was fruitless. He could find no ray gun or weapon of any kind18. Desperate, knowing that Ross and Quent would return to the control deck when they had searched the rest of the ship, Tom turned and scrambled up the ladder to the radar deck19.

Again, barring the door behind him, he sat before the audioceiver and began calling the Polaris20.

Tom spun the dials on the audioceiver desperately, ranging over every circuit and repeating his cry. "This is Cadet Corbett! I am being held prisoner with Cadet Roger Manning aboard the spaceship Space Knight in space quadrant four, chart C for Charley....23"

Suddenly the hum of the generators stopped and the glow of the tubes in the audioceiver24 died. Without a second's hesitation25, Tom spun around and lunged for the door leading back to the control deck.

"They must have shut off the power," he decided. "When they didn't find me down below, they guessed that I came this way26."

Want to know what happened next?   Read the book. We double-dog dare you.

1Aptly named, trust us.2They practice jumping over bodies at Villain School.3They're called Bussard Collectors, you dork.4Ray gun? Really?5Their nicknames are Beel and Zebub.6Not best practice for shooting. Rocks are for throwing.7On all fours.8Remember: real men don't use the stun setting.9Possibly collect.10Not anything sensible, just anything.11The IQ level in space is appallingly low. Must be due to prolonged exposure to cosmic rays.12Whether to Grabthar or the Wormhole Prophets, we know not.13No hats in space, so the baddies have to wear black space suits. Makes sense.14The script said 'Pause', so he did.15Note for intergalactic hunters: Venusian quail are three meters tall, but quite tasty when barbecued.16Not as good as a wide escape, but hey.17So he's not dead? Good to know. Family friendly, this stuff.18Have you tried, er, the Weapons Locker?19Maybe you can weaponise a scanner.20Let's hope you still have minutes left on your calling plan.21No comment.22Space navigation is so precise…23While this beats being held prisoner in a Chinese fortune cookie factory, there isn't anything around to eat except Space Food.24An 'audioceiver'. The mind boggles at the inventiveness of future science.25Tom didn't see any pauses in his script.26Duh.