Parental Guidance Suggested. Do not let your parents near the kids. 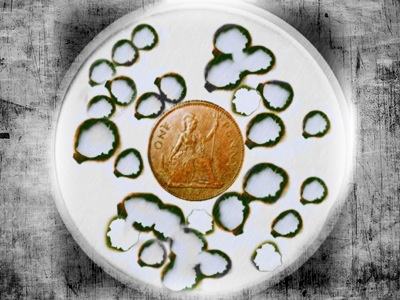 Since I'm going to be a grandad for the first time hopefully by the end of August I thought I'd share one of the bizarre games my grandad (known as Gag), used to play with us as kids back when dinosaurs ruled the world and we weren't wrapped in politically correct cotton wool!

I'm cringing and also giggling to myself as I write this – our kids would die if I suggested we play this today!

Now take one glass, a penny (1d was not a group back then!) an elastic band and a sheet of really horribly cheap loo roll, Izal I think it was called, often liberated from my Gag's work as it also made great comb kazoos!

Secure one sheet of the tissue to the open end of the glass with the elastic band so you get a nice tight drum kind of look. Obviously you need a glass that the the tissue paper will fit over and have an overlap, once held securely the glass is placed in the middle of your table.

Then take the penny and place it in the centre of the paper. Nothing too shocking yet but here's the bit where Esther Rantzen gets a phone call!

Gag would then light a cigarette (a Woodbine or Players – unfiltered obviously ) and we'd take it in turns to carefully and thoughtfully scorch holes in the paper with the burning fag, getting trickier and trickier as the holes multiplied and merged, trying not to let the penny drop.

Gasps all round as the holes joined and the penny began to wobble (or maybe due to the cloud of smoke we were all hunched around!)

The game usually reached the point where the paper was a spiders web of singed holes and there were two tiny strands of tissue left, the coin balancing precariously between.

One last turn, the penny drops into the glass with a lovely tinkling sound and the game was over! The person to make the penny drop had to sit out of the next round and the we continued until there was an out and out winner, or until my Gag ran out of fags!

Sounds truly awful nowadays and I am honestly cringing thinking of us kids passing the fag around eager for a turn, but it was a favourite of ours, a sort of smoking mans Jenga!

A different age, no public education on the horrific dangers of smoking,( I'm certain my grandad would be as shocked as I am if he were still with us), just an improvised game with something that was just a part of everyday life...but I'm glad that loo roll is no longer made, now that was a health hazard!