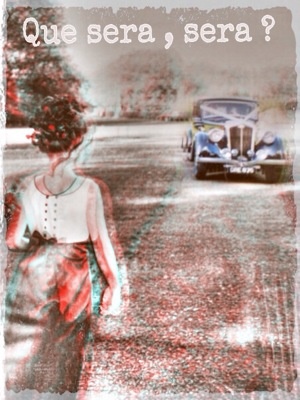 "Do you, Chester Batty, take this woman to be your lawful wedded wife?"

The vicar looked to the groom, pausing resignedly as Chester consulted his best man.

Seconds stretched into uncomfortable silence as the data was relayed.

" I do not," was the whispered response as Chester sadly dropped his so recent bride-to-be's hand, "Fourteen months from now, you will have a short affair at work, resulting in a pregnancy you will pass off as our own."

She began to shake her head but realised arguing with the certainty of her own future actions was futile.

Chester turned to the congregation (most of whom were thankfully only present electronically), gave his own apologies and left the church within the minute.

He gratefully paid the seer his enormous but justified fee, adding several thousand as a bonus, before climbing into his limo.

The seer dispassionately checked the transfer had completed and gave Chester his receipt, shaking the man's hand through the open rear window.

He would miss Batty; not only a valued client but as close to being a friend as any seer could expect. The ability to advise on future decisions was one thing, but the ability to see every future path tended to scare most normals away.

Still, the best man gigs were certainly a lucrative way to spend a Saturday.

He shook his head as he crunched up the gravelled driveway, yes, he'd miss Batty.

Sad that Chester would die in that terrible accident some, he checked his wristwatch, some four minutes from now.

If only he'd checked with his best man.