Bird Ringing in the Polokwane Game Reserve, Part I

This week I am extremely busy with arranging an art exhibition, the first one I organize myself, so I did not have time to paint something as well. So I would like to bring you a special edition, showing where some of my inspiration comes from!


Close Encounters of the Bird Kind

A few weeks ago I attended my first bird ringing event in the Polokwane Game Reserve, hosted by Billy Attard and Derek Engelbrecht. A few others also helped out, and many of the people attending were given their own experience in ringing birds. Folks in the USA might be confused, since this practice is called 'banding' over there. It doesn't involve ringing bells at birds, or having a musical band play songs to them. The idea of bird ringing is to catch birds, then take careful measurements of them, then put small metal rings on their legs and then release them. The process enables individual birds to be identified … for instance some of the birds had already been ringed previously, so now when we catch them again, we can compare their stats. This helps a lot in determining birds’ movements, and also their lifespans. But aside from the scientific interest, bird ringing gives people the opportunity to see birds from really close up, in the feather so to speak, even to hold them in their own hands. This is a wonderful opportunity here in South Africa with all the beautiful birds we have.


First of all, very early in the morning the nets were set up in regions where birds are expected to be moving. The birds get caught in the nets, which aren't easily visible, having a very fine mesh. The birds can get badly entangled, and getting them out again is a difficult and rather nerve-wracking (to me at least!) affair. The birds caught in these nets are mostly small species; larger ones are often able to free themselves on their own.


After the birds are removed from the nets, they're placed in special cloth bags. They are 'stored' hanging in the bags from a line until they can be weighed, measured and ringed. The measurements are done very carefully using precision equipment. The measurements are of the birds' bills, heads, wings, tails and lower legs. Their plumage is inspected for condition and moulting, they're sexed (that is to say they're categorized as male or female), and it's recorded if they're adult or juvenile. We had quite a few juvenile birds. The rings are put very carefully around their lower legs, and then they are released.


The process can be quite stressful for the birds for many reasons, so they are handled very carefully and the measuring and ringing is done quickly. The attending members of the bird club got treated to close-up views of many species, and were taught some of the distinctive features of these species. Many of us also got to hold the birds and to take some of the measurements ourselves.


Right, now for the photos! 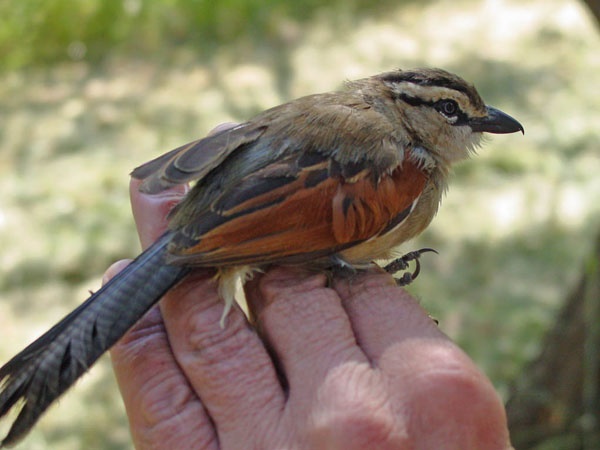 This is a Threestreaked (or Brown-crowned) Tchagra. This small member of the bush-shrike family is common and widespread in thorny savannah in northern South Africa. In and around Polokwane, their presence can usually be told by their rather raucus calls. Here's the tchagra in Billy’s hand. Its tail feathers got bent out of shape in the bag. Note the sharpy hooked bill with which it catches its invertebrate prey. Like most bush shrikes, tchagras hunt small insects and other invertebrates by actively searching through trees and bushes. 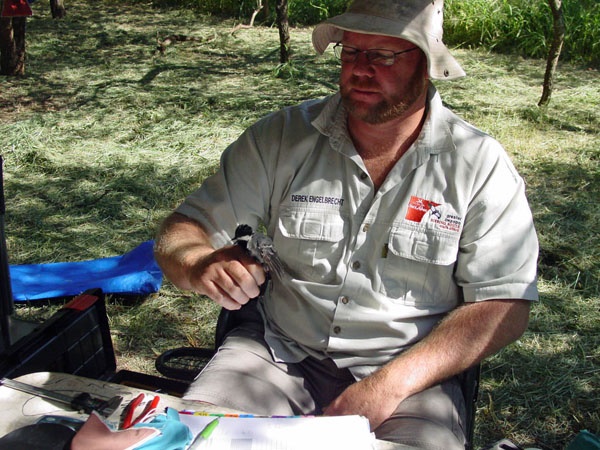 Derek is holding an Ashy Tit here. These tits are common in the reserve, their churring calls betraying their presence. They were not impressed with being handled, giving Derek a few hard nips! Tits are very verstatile and intelligent birds. South Africa doesn't have many species; only these ashy tits and black tits occur in our region. 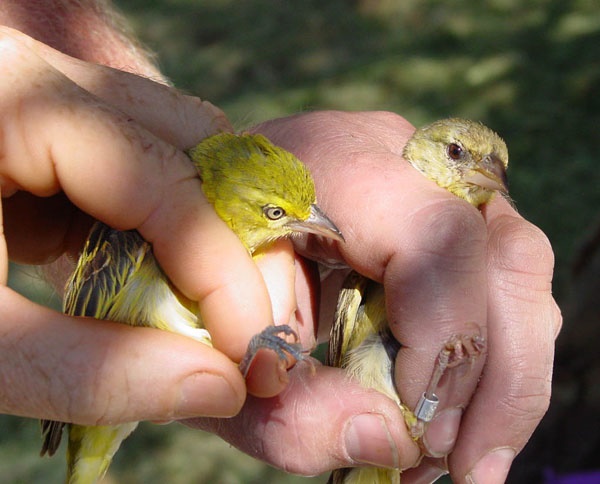 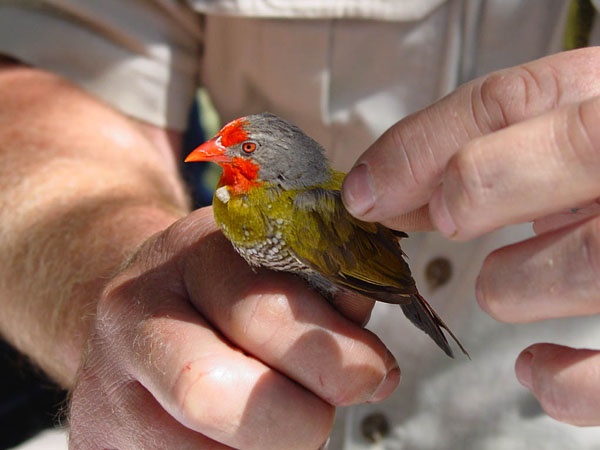 The Melba finch, or Green-winged Ptylia, is a tiny member of the waxbill family. This is a male; the female lacks the bright red feathers on the head and throat. We caught a few of these. They are fairly common in the reserve. They occur mostly solitarily or in pairs, and are also seed eaters, pecking the finer grass seeds with their little bills. They also take berries and insects. They're usually seen flitting through bushes and clumps of grass.


This story will be continued in next week's issue of the h2g2 Post. Tune in for more beautiful birds!