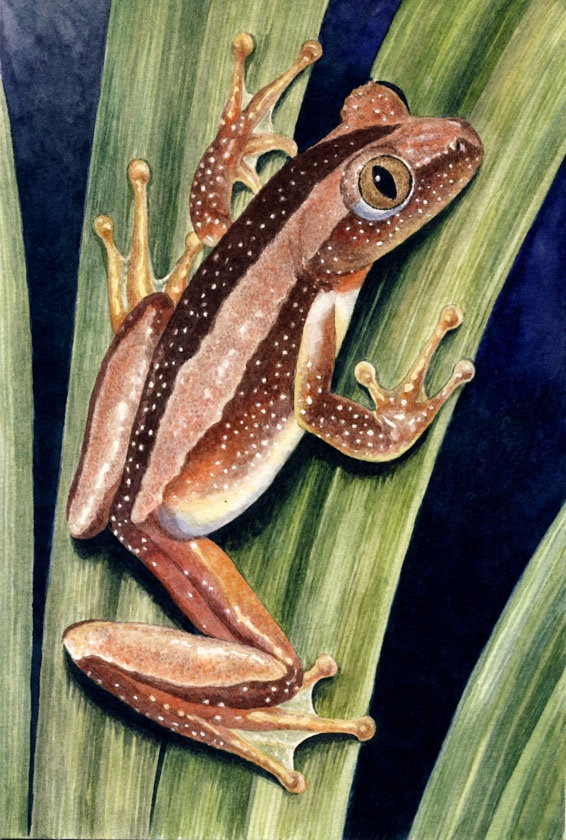 Another froggy for you! This is the Greater Leaf-folding Frog, Afrixalus fornasinii. Even though it is called 'greater' it is still quite a small little frog, reaching a head-and-body length of 4 cm/1.6". The other leaf-folding frogs simply happen to be even smaller! Only about half as long, in fact. They are all very delicate and exquisite things. The leaf-folding frogs are diverse, with about thirty species occurring in tropical Africa. The greater leaf-folding frog occurs from the northeastern parts of Kwazulu-Natal northwards, as far as Tanzania. These frogs are related to African reed and tree frogs. They have expanded toe-tips that are flexible and sticky, helping them climb around reeds, grass and other vegetation. They don't swim much, and have reduced webbing between their front and back toes.

The name of these frogs comes from a remarkable reproduction-related habit of theirs. Frogs as a group are amazing for the variety of reproductive strategies they employ. Leaf-folding frogs, being tiny, are very vulnerable to a variety of predators. Their eggs even more so. Like other amphibians, the eggs of leaf-folding frogs don't have shells, they're just lumps of a soft jelly-like substance. To keep their eggs from being eaten, they hide them away! Most leaf-folding frogs breed in patches of seasonally-inundated grass. These grasses, adapted to surviving while partly flooded with water, have broad leaf-blades. The little leaf-folding frog males display by crawling onto these leaves where they emerge from the water, and calling. Their calls are buzzing and clicking sounds. The females arrive and choose which males catch their fancy.


The mating process is actually not quite as straightforward as that. As in some other critters, little leaf-folding frogs sometimes cheat in a dastardly fashion! While the displaying males space themselves out on their leaves, giving each other a wide berth so that each has his own little territory, there are a few other males, called pirates, that don't call and don't draw any attention to themselves. They lurk in the background while the other males call. When a female comes around, drawn by the call of one of the displaying males, and she comes close enough to one of these lurking males, he will rush out and try to mate with her even though she didn't choose him!


Most of the time though the female will mate with the male of her choosing. Joining her favoured male on the leaf, they clasp each other in a position called amplexus, the male grabbing the female from behind with his arms hugging her under her armpits. The greater leaf-folding frog has its body covered in tiny little spines rising from white bases. These spines help these amphibians with their otherwise smooth and slimy skins to grab hold of each other more firmly.


The two hugging frogs now crawl lengthwise over the leaf. The female lays her eggs along the leaf blade while the male on her back squirts his sperm over them as they emerge. (This is called external fertilization, which occurs in most but not all amphibians, in contrast to the internal fertilization which occurs in reptiles, birds and mammals.) After having fertilized the small clump of jelly-like eggs, the male releases the female and folds the sides of the leaf blade inwards to form a tube around the eggs. The female now secretes a sticky fluid, which glues the edges of the leaf blade together where they meet in the middle. With the grass folded around the eggs like that, they are quite well hidden! The folded grass blade is not easy to pick out out from among all the other blades of grass.


Concealed and protected, the eggs now develop. Little tadpoles grow in them, and when these are large enough, the glue sticking the leaf together will melt. The leaf opens up again and the tadpoles slide off it and fall into the water. Here they feed and grow for three more months, and then turn into little frogs, leaving the water and scampering off into the surrounding vegetation.


The greater leaf-folding frog is one of five species occurring in South Africa. Apart from its larger size, it can be recognized by the bold brown stripe that goes along its back, and the small white specks over its upper surface. The male also has a bright yellow disc below his throat, covering the large vocal sac that expands when he calls. Females are slightly bigger than males. These frogs occur in a variety of well-vegetated habitats like savannah, grassland and coastal scrub, usually at low altitudes.