April Create is about local claims to fame. Here's one you may not know about. 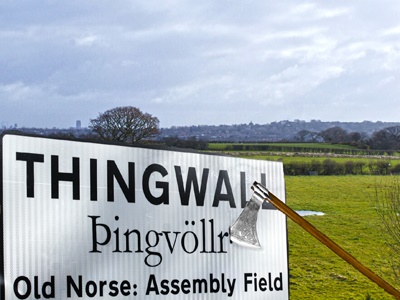 Looking over the fields at the bottom of my garden you can see in the far,far distance both of Liverpool's cathedrals, hundreds of years of history in the city skyline, but way way too young.

A bit closer down the hill lies Storeton Village, Storeton Hall being mentioned in a 14th century poem, complete with Knights of the Round Table, but thats still a few miles away and Gawain and the Green Knight are way too recent.

There in the middle distance the tiny settlement mentioned in the Doomsday Book as Landechene in 1085. A lovely lane to stroll along, reeking of history.

The surrounding farmland a few feet from my doorstep dates back even further, 902 in fact and probably earlier. To my right there's Cross Hill, thought to be the ancient meeting place of our Viking ancestors. This assembly field or Þing Vollr was the Viking Parliament, believed to be the oldest in mainland Britain, even predating its Icelandic counterpart by some thirty years.

Most of the place names around here are peculiarly of Viking origin, from late in the ninth century they raided along the Peninsular from across the Irish Sea, eventually bringing their strange Norse names to our little neck of the woods.

After being expelled by the Irish, the Viking leader Ingimund gained permission from the Lady of Mercia, Ethelfleda , daughter of Alfred the Great, to settle peacefully here, that is until they raided Chester a few years later!

Just down the road there's a hill with a rather large sandstone rock, seemingly dropped amidst the bracken, the same hill being struck more times by lightning than any other place in the area, maybe Thor wants it back? The Norwegian press in 2001 even went as far as stating Mjollar had at last been found!

We have, over the past few years started to celebrate our Ancient history, all 1100 odd years of it, from Viking festivals to the village road sign being translated to Norse! A huge part of this being thanks the work of Professor Stephen Harding, a local born expert on all things Viking. I recommend a quick google if you'd like to know some more, including DNA tests showing 42 percent of us have Norse genes, ancient local artefacts, and of course where we get all our strange place and street names from!

Our Saxon neighbours across the river have a splendid maritime heritage, but compared to our local history, they're newcomers!