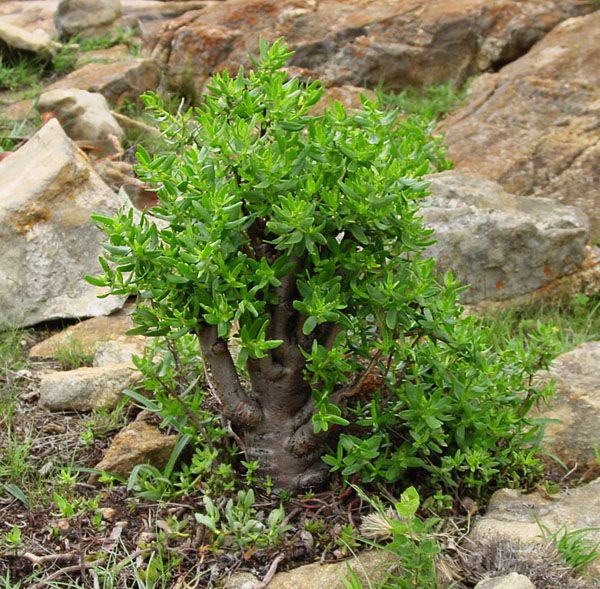 Today I bring you an inconspicuous but delightful little plant. This is the Bonsai Crassula, Crassula sarcocaulis. The genus name 'Crassula' means, roughly, 'thick', while the species name 'sarcocaulis' means 'with a fleshy stem'. Both of these of course refer to the plant's succulent nature. The Bonsai Crassula is found in northern and eastern South Africa, usually in hilly or mountainous regions. It also ranges into our neighbour countries of Zimbabwe, Swaziland and Mozambique and as far north as Zambia. There are many other crassulas in South Africa, at least a couple of hundred. They are so diverse that it is hard to work out just how many species and forms there are.

This species is named for its resemblance to a little tree. The plants you see here are only about 40 cm/16" tall. The species grows to a maximum of about 1 m/yard in height. They typically look like stout and stunted little trees, with a thick stem supporting a crown of small, succulent leaves. Some specimens are multi-stemmed and more spreading. This species is remarkable for how individual each plant is … no two look alike. They often occur in colonies supporting many individuals, in some places even forming mini-forests!


I am sorry for not having photos of these plants in flower. Their flowers are small, white to light pink, star-shaped and quite similar to those of the related Beestebal plants. In good flowering seasons they can completely cover the plants. They are insect-pollinated. The flowers don't fall off after pollination, but turn dry and brown. The seed capsules inflate and become dry and papery as well. Finally the flowers and seed capsules detach and are blown away by the wind along with the very fine seeds. Because the mountains and hills where they grow often experience strong winds, and because the seeds are so fine and numerous, they can be carried over great distances, and this species has been able to colonize suitable habitats over a great range.


But the bonsai crassula has another propagation tactic as well! It is one of the succulent plants that most easily grow from detached bits and pieces. Its stems are quite brittle. Animals that move through bonsai crassula mini-forests will, simply by brushing up against them, break off small branches and twigs. These fall to the ground – but don't die! They immediately start forming small roots that dig into the soil. Once rooted, the detached piece becomes an independent plant. Bonsai crassulas even shed bits of themselves without being disturbed by anything. Even the tiny tip of a twig with just a few small leaves can root and become a new plant. This helps the bonsai crassulas to form their little mini-forest colonies!


The main vulnerability of the bonsai crassula is its smallness. It can easily be outgrown and overshadowed by grasses, shrubs and trees. It doesn't like growing in the shade, preferring full sun. Therefore it is mostly found in very shallow soil on hills or mountains, such as pockets of soil and leaf litter collecting in cracks between rocks or at the edges of rock sheets. My one photo shows one growing from a small crack in a rock. In these places, larger plants can't easily grow, so the bonsai crassulas can thrive. Their vigorous roots will penetrate deep into the cracks and spread out through the available soil to provide them with nutrients. The plants store water and nutrients in their fat trunks and juicy leaves. This allows them to survive long periods of drought and to flourish on sparse resources. 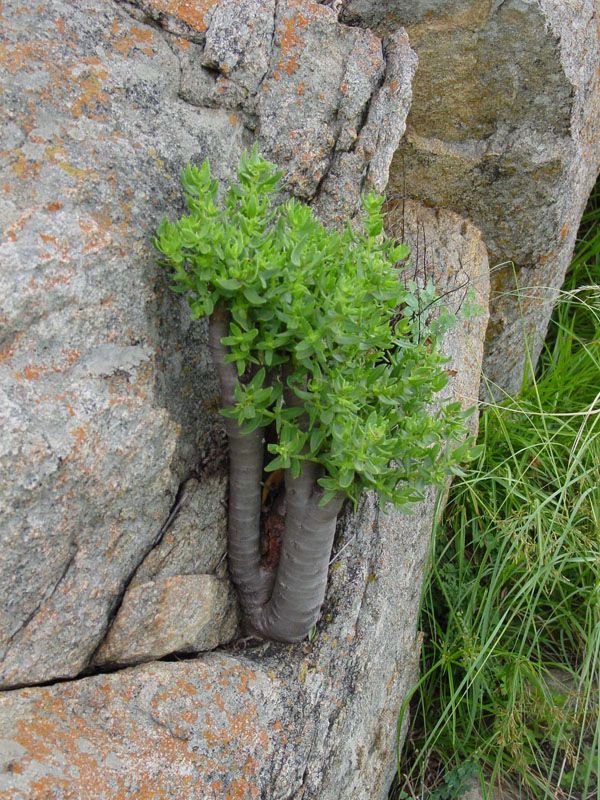 Another strength of this little plant is that it is surprisingly cold-resistant for a succulent. I don't know exactly why … there must be some feature in its sap chemistry … but it is able to survive on high mountains that experience frost, cold winds and even snow. (Just note that I speak in a South African context: what is cold for us isn't very cold for an American or European.) Most succulent plants are particularly vulnerable to frost, as they store so much water in their trunks and leaves. Unlike ordinary trees, they can't or don't shed their leaves and draw their sap down to their roots when it gets very cold. If the sap freezes, it bursts the cells in the leaves and stems, severely damaging the plants. Most succulents therefore are not found where it gets very cold. This allows the bonsai crassula to grow with less competition! Only a few other succulents, such as some aloes, mesembs and euphorbias, can grow in these cold mountain regions.

This species is quite easy to cultivate. The easiest method is by rooting a cutting, which can be small or large. Just let the piece dry out in a shady place for a week, then root it in sandy, well-draining soil. This species is easy to keep in a pot, and will thrive outdoors in areas that are not too wet or cold. In South Africa snow is unusual, so even a place that gets light snow for us qualifies as cold. That this species can survive light snow is remarkable; it will not survive in regions that are really cold by American or European standards. Still, I would love to hear of other people's experiences. The species is so easy to propagate that a grower can have many specimens, a few to really nurse and take tender care of, and a few to use for experiments, such as cold or drought tolerance. Some plants are more tolerant than others … those occurring in the high Drakensberg mountains handle cold the best, while those from lower hills in more northern regions prefer a warmer climate. One thing it does not tolerate is wetness. If the plants are kept wet, they will rot. If they are caught in time they can be saved: simply cut away the rotted sections, let the healthy pieces dry out and form scar tissue again, and re-root. But it's best not to let this happen. Keeping the plant dry over the winter is a good way to prevent rotting, as is using a well-draining, sandy or gritty soil, and keeping the plants in full sun.


The chief virtue of the bonsai crassula is how easily it can be trained. The stems are soft and pliable – though a bit brittle so pieces might break off, but that's no real crisis – and so, it can easily be trained into various shapes for the purposes of making attractive and unusual specimens such as bonsais. It is naturally a bonsai-like plant so it's not really necessary to deliberately stunt it. Pruning the plant is no problem; it can be pruned severely to permanently remove branches, but if a bit of the pruned branch is left, it will form several new, vigorous shoots. So judicious pruning can be used either to make a sparsely-branched tree-like specimen, or a vigorously-branched bush-like one, which also is lovely when covered in flowers. Bonsai crassulas can easily be combined with other plants, and it might also be a worthy project to use a large tray and make a little mini bonsai-forest!