Today I have for you a weird and comparatively little-known plant, the Beestebal, Crassula arborescens. The name 'Beestebal' in Afrikaans means 'Bull-ball' more or less. In English it is also known as 'Tree Crassula' or 'Silver Dollar Plant'. The scientific name Crassula means 'thick one', alluding to the thick leaves and/or stems of most members of the genus, while arborescens means 'tree-like'. It is, along with the Kerky Bush (which I'll also feature soon), the largest member of the genus, reaching 3 m in height. The family, the Crassulaceae, includes several other genera, and occurs in Africa, Eurasia, and the Americas. The family is very diverse, including succulents adapted not only to warm and dry regions but also some that are able to survive in very cold climates, and some species grow in moist places, even in water! The genus Crassula contains mostly small species but these display an amazing variety of forms. Most species are restricted to South Africa. 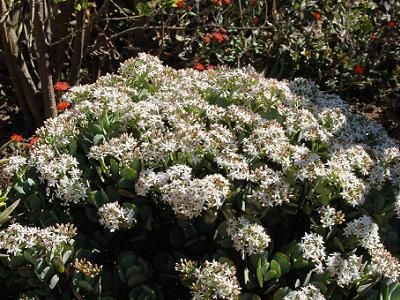 In nature this species has a wide distribution, from the southwestern Cape to Kwazulu-Natal and Swaziland. This spans from the winter to the summer rainfall region. It usually grows in semi-desert scrub or thickets amidst rocks and boulders. Wild specimens are craggy, gnarly characters as portrayed in my drawing. In the garden it usually grows as a shrub with a wide, dense, rounded crown. There are two forms, the typical one with rounded leaves, and the subspecies undulatifolia which has narrower leaves with wavy margins and only occurs in the Klein Winterhoek mountains of the Eastern Cape province. In regions with higher rainfall these plants will grow mostly in loose, freely-draining soil. Their thick leaves and stems help conserve water, and they have dense but shallow root systems designed to rapidly absorb water from rain showers. The waxy bloom on the leaves also helps reflect sunlight, so that the leaf would not overheat or dry out easily. 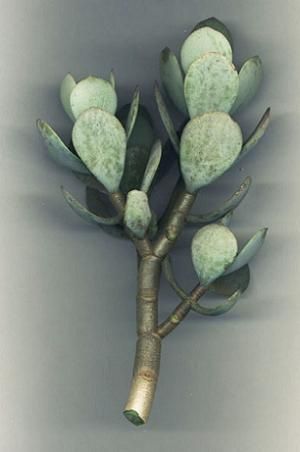 This crassula can be distinguished from its relative the Kerky Bush, also called the Jade Plant or the Money Plant, by its larger leaves with a greyish bloom. These leaves often have spots or blotches on their surfaces, and sometimes have red margins. The Beestebal also has larger, whiter flowers. These are star-shaped and cover the bush when it flowers in summer (but mine has had flowers well into the winter).


This plant is common in its natural habitat. Its flowers are pollinated by birds, bees and a variety of other insects, and after pollination turn papery and brown and remain on the bush for a long time. The fruit are small, dry capsules containing an abundance of very fine seeds. These are easily carried far and wide by the wind. Seeds that lodge in small crevices where rain water can collect will germinate into new plants. But this species can also reproduce vegetatively. Their branches and twigs are brittle and animals or humans walking through the scrub will often detach pieces. Storms of hail, which are infrequent but do occur from time to time, will also knock off bits of the plants. These, falling on the ground, will produce roots and grow into new plants.


This feature also makes it very easy to cultivate these crassulas. The seeds, being small and blown away as soon as the capsules open, are very hard to collect. But it is very easy to snip off a twig, let it dry and form scab tissue over a week or so, and then plant it. It must be kept moist, not wet, and will soon sprout roots. These plants become large shrubs with stout stems. They like sunny positions but also grow well in light shade, and can take light frosts. They don't like wet conditions, but grow best given infrequent watering throughout the year. They do very well as house plants, and can be kept in pots … preferably large ones. It is possible to train them into interesting bonsai specimens. 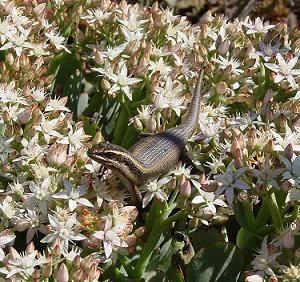 My Beestebal in my front garden is a favourite hangout spot for striped skinks, Mabuya striata. These lizards are certainly the commonest reptile species in my home town of Polokwane, as well as much of South Africa, being very adaptable. They frequent my Beestebal shrub while it is flowering, clambering around on the dense, rounded top, ambushing the insects that come to pollinate it!


This species also has a few traditional uses. It is used for epilepsy and in Swaziland people eat its roots.