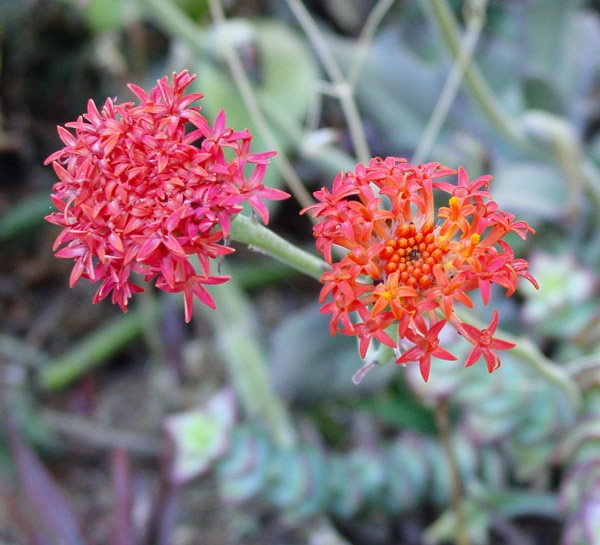 In the previous article, I told you about the pretty and famous local Barberton Daisy. This time I want to introduce you to a close relative of it, not as famous but equally pretty! The Coral Kleinia, Kleinia fulgens, is one of several succulent members of the Daisy family found in South Africa. Its genus name comes from a doctor Klein, actually a zoologist living in the Seventeenth and Eighteenth Centuries, who first documented the plant. Interestingly, 'klein; is also German (and Afrikaans) for 'small'. The Latin species name, fulgens, means glittering, shimmering, shining or flashing (from which the English word 'fulgent' is also derived). So the scientific name is apt for the brilliant beauty of these little plants! They are especially showy for often growing in dry scrub. It's a wonderful experience finding one of these plants flowering underneath some thorn bushes! So far I've not seen many of these plants in the wild here in South Africa; though they're not at all endangered, they're still a pleasantly surprising sight. This species is also known as a Coral Senecio. Senecios are also members of the daisy family, and Kleinia is sometimes included among them. But there are some differences; Senecios are usually not succulent or only mildly succulent, while Kleinias are always very succulent. Senecio is an enormous group with hundreds of species, while Kleinia includes only a small number of species, in South Africa only six or seven or so, and a few more in tropical to northern Africa. I hope to soon tell you more about other fascinating members of the genus from around my part of the world. Though not having many species, the genus displays an amazing diversity of forms.


This species of Kleinia is found in the far northern and northeastern parts of South Africa, and also in our neighbour countries of Swaziland, Zimbabwe and Mozambique. They often grow in rocky places, on mountain slopes or the small isolated hills called 'Koppies' (meaning 'little heads'). They usually grow in dense scrub, this tending to hide their leaves and stems, only their flowerheads (often emerging in winter when the veld is dry and barren) betraying their presence. But actually the rest of the plant is also quite pretty. Coral kleinias have thick, succulent leaves with a grey bloom. Sometimes they are tinged with purple. I have scanned two leaves in directly for you, showing how they vary, some having mostly smooth margins, others being prominently toothed. You can see a little bit of a purple line along the margins of the leaves here. They are mostly 10-12.5cm/4-5" in length, but in robust plants can be much larger. 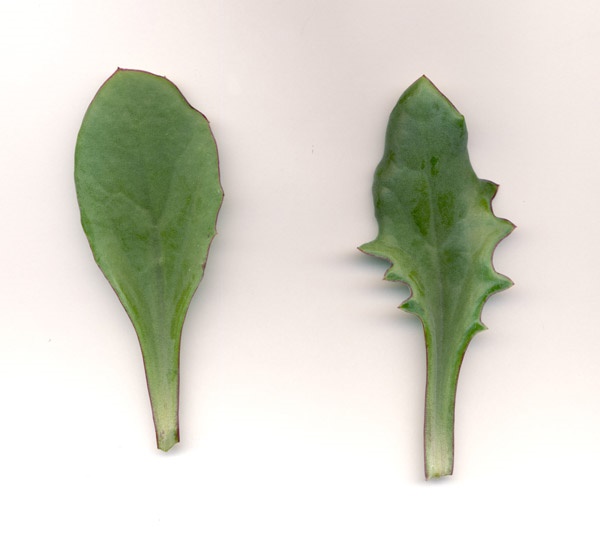 The stems of coral Kleinias are succulent as well. They vary a lot. They can be long and thin, reaching a height of 60 cm/2' or occasionally more, leaning on neighbouring plants for support. They can also be short and stout, bearing the leaves near or at ground level. In addition, coral kleinias have tuberous basal stems. Sometimes these are fully under the soil surface, but sometimes they are partially exposed, and sometimes the tuberous part goes up over much of the lower stem. They can therefore be grown as 'fat-stemmed plants' or pachycauls. They are sometimes called caudiciforms, but this is not entirely accurate. Caudiciforms have tuberous bases from which thin stems arise annually, dying back again each year. Coral kleinias mostly don't do the annually dying back part, the surface stems persisting, only sometimes losing their leaves over winter. But I have seen some specimens that die back completely, and resprout from the fully underground tuber each summer. The species is indeed quite variable.


The variation also extends to the lovely flowers of this species. They vary in colour from orange-red to deep coral-red. The flowerheads reach 3 cm/1.2" in diameter, and in good years can entirely cover the plants for a showy spectacle. They are borne well above the leaves on thin stalks, these reaching 1 m/yard in height in some of the largest plants I've seen, but can also be just about 30 cm/1' high. The flowerhead of the coral kleinia shows the thistle type of daisy flowerhead, different from the typical daisy form seen in the Barberton Daisy. In daisies, what we consider to be single flowers are actually flowerheads made up of many individual flowers. Typical daisy flowerheads have two distinct types of flower, the central disc made up of disc florets, surrounded by the thin, petal-like ray florets. In the thistle-type flowerhead, there are no ray florets. Instead, the central flowers or disc florets are the prominent ones. In my close-up photo of the flowers, you can clearly see how the flowerhead is actually made up of many individual flowers, pressed close together. Each disc floret in the coral kleinia has well-developed petals surrounding a long, thin tube. This contains the nectar, which attracts pollinating insects and birds. Coral kleinias have many pollinators, ranging from birds like sunbirds to butterflies and other insects. Along with the flowers of aloes, these provide a good source of nourishment over the dry winter months. 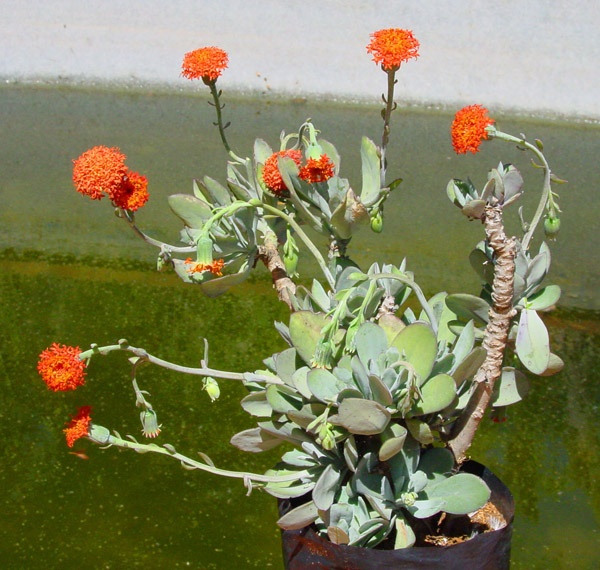 Coral kleinias are very easy to grow. They can be propagated from seed, but by far the easiest way is by cuttings. Any stem cuttings will do: let them heal and dry out for a week or two, and then plant them. Use sandy, well-draining soil with a bit of compost in it. Insert only 1-2 cm/0.4"-0.8" of the base of the cutting into the medium and water very sparingly. Being succulents, coral kleinias can survive and thrive in dry conditions. They can also handle regular, year-round watering if the soil drains well enough and the climate is warm and not too humid. But they can also survive a complete autumn, winter and early spring drought. If grossly overwatered, the plants can rot. The rot starts at the base of the plant, and if you act quickly, you can still save it. Simply cut off the rotted part and let the rest dry out for two weeks. Make sure no rot remains. Once the plant has dried out and formed scab tissue and there's no sign of remaining rot, plant it again using the same strategy as when rooting a cutting. Don't overwater it this time!


Another interesting method for propagating these plants is by leaf cuttings. Remove a leaf with as much of the base intact as possible. Let it dry for a week or two just like an ordinary cutting, in a warm, dry, shady place. Plant it with just the lower centimetre/half an inch or so of the base in the rooting medium. New plants should form at the base of the leaves after 6 to 8 weeks.


Once growing in a garden bed, coral kleinias will propagate themselves. The tuberous base of the plant will form new stems and tubers over time, turning your plants into spreading clumps. Flowers, if pollinated, will be followed by the fruits, actually wispy dandelion-like tufts. Each seed has a long plume of fluff, which lets the wind catch it and distribute it far away from the parent plant. Or sometimes not so far. Many seeds fall below and around the parent, and you might soon see seedlings sprouting in your garden bed. You might collect the seeds and try to germinate them. Sow them in a similar sandy potting mixture to what you use for the cuttings.


These plants grow in warm regions and can't tolerate frosts. Still, in a garden bed with many other surrounding plants, they are sheltered against light frosts; they grow well outside over much of South Africa. In colder or wetter regions, they should be kept indoors. Coral kleinias grow well in full sun but can also grow in light to medium shade. Kept in a small pot they can be trimmed to keep them neat; especially, the flower stalks that dry out and persist after the flowerheads have already turned to seeds should be trimmed off at the end of winter. Let me say again that these plants need well-draining soil and should not be overwatered. You must see for yourself whether your specimen is able to keep in leaf throughout the year, or prefers to die back each winter. If your plant loses its leaves, then don't keep on watering it as always … stop or at least greatly reduce the watering, allowing the plant to go dormant until the next spring when the new leaves come out again.