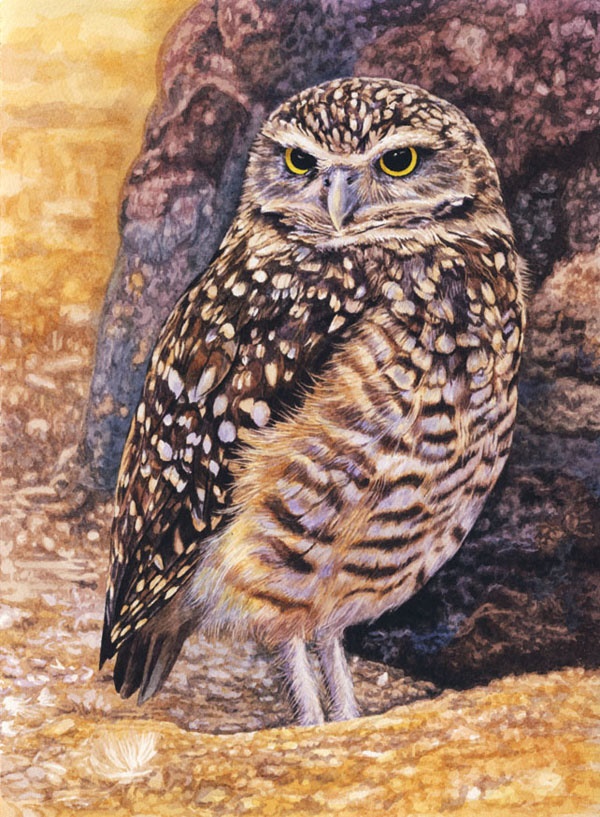 This time I have for you another endearing little modern dinosaur! This is the Burrowing Owl, Athene cunicularia. The genus name 'Athene' it shares with the Eurasian Little Owl and a few other species. It refers of course to the Greek goddess Athene or Athena, who is often depicted accompanied by an owl, a symbol of her wisdom. The species name 'cunicularia' can refer to rabbits or to underground excavations. It is sometimes given its own genus, Speotyto, which means 'cave owl'. All of this of course refers to the unique lifestyle of this little owl – the most terrestrial of all the owls, it nests and shelters not in tree holes but in holes in the ground.

Burrowing owls inhabit open, sparsely vegetated land, like grassland, desert and semi-desert, and in some regions also agricultural land. They are found over much of North as well as South America. In the colder parts of North America, they stay only during the warm spring and summer months, migrating south for the winter. They are often associated with burrowing mammals, most particularly prairie dogs (which are actually no dogs but a species of ground squirrel). They take over old, unused burrows from these. Occasionally they will dig their own burrows. They may also use excavations made by humans. They sometimes congregate into small colonies based on extensive systems of burrows.


Often these same burrow systems are also used by other critters! In particular, they are pleasant retreats for rattle snakes. Indeed, the owls don't seem much bothered by the snakes. They go so far in fact as to derive some protection from them! When a predator like an eagle or a coyote threatens a burrowing owl it will dive into a burrow and, if pursued, will hiss and rattle just like a rattlesnake! The predator may at this point be unsure whether there is an actual rattlesnake in the hole as well, and to be safe, might abandon the hunt.


Come breeding season, the owls must make their burrows ready for the chicks. They gather nesting material from all over their range; a lot of it ends up not being used in the nest, but lying on the ground around the entrance. A favourite if somewhat disgusting nesting material is cattle dung! In the desert at least this dries out to the point where it is a fairly inoffensive, fibrous mass even if still with a bit of a pong to it. Cattle dung seems to be ideal for insulating the nests so they don't get too warm or cold, deserts and plains often experiencing extremes of temperature. But the dung also attracts dung beetles … and the owls feed on these!


After mating, the female owl lays her eggs, from four to twelve per clutch, but averaging nine. She doesn't lay them all at once, but staggered by intervals of one or two days. The youngest, smallest owls often don't survive, with four to five chicks being the average raised to adulthood per season. At the age of a month they start leaving the burrow, but their parents still feed them until they are three months or so old.

Compared to the Little Owl, burrowing owls are very similar: small (about 25 cm/10" long and 140-240g/4.9-8.5 oz in weight), with round heads and marked with white spots, and brown bars on their fluffy bodies. Females can be heavier than males, but males tend to have longer measurements. They all have unusually long legs. They can run quite fast, and will often chase their prey down on foot over the plains.


These owls are not as nocturnal as other owls. They can be fairly easily seen during the daytime. They still do most of their hunting during the night. They have large eyes and very good vision. Like other owls, their sense of hearing is also excellent, and they rely on that more than vision during the darkest nights. Their prey is mostly small critters like insects, scorpions, spiders, frogs, toads, lizards and small snakes, rodents and other small mammals, and small birds. They can catch birds similar in size to themselves, like doves. Their typical hunting method is to perch on a bush or small tree and watch and listen, then swoop down on a target. They can also catch insects in mid flight, and as described above may also run down their prey.


Lastly, these owls are also unusual in that they eat a fair amount of vegetable food! They eat the fruit and seed of several species of cacti, which can have very juicy and even sweet fruits.


In some areas, these little owls are endangered. Their habitat is often converted to farmland. Where agriculture is intensive, they can no longer maintain their lifestyles. But in other regions they have shown an ability to co-exist with humans. They may be found on fields and in parks even close to or in the midst of cities, including on golf courses, if they're not disturbed too much. They also extend their range into regions where the forests have been cut down by humans. (Of course, this doesn't mean that cutting down forests is good, since a great many other species lose their habitat in the process.) Burrowing owls are also harmed in campaigns to eradicate prairie dogs, such as on cattle farms. But today there are some conservation measures taken to ensure the future of these charming little owls.