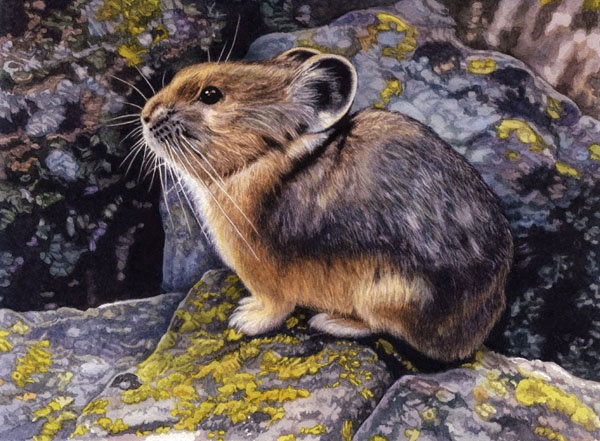 Here I have for you a very cute little critter, an American Pika, Ochotona princeps. I am indebted for the photo I used as a reference for this painting to Deidre Lantz, whose gallery I urge you to visit here. "What is a Pika?" I imagine some of you asking. Well, apart from being a very cute little critter, it is a relative of rabbits and hares. Therefore, it is not a rodent. Rabbits, hares and pikas constitute a different order, the Lagomorpha. They probably share an ancestor with the rodents going back some dozens of millions of years, but today are quite distinct. Pikas are smaller than rabbits, this one averaging about 170 g/6 oz. in weight. They also have short, round ears, and tails totally hidden inside their round, furry butts. Their hind legs aren't much longer than the front ones, and so they don't hop or leap like rabbits or hares, although they can scurry about quite rapidly.


There are many species of Pika in Europe and Asia, but only two in America, this one and the Collared Pika which occurs further to the north, in Canada and Alaska. The American Pika is found in the western half of the country, in the Rocky Mountains from Arizona northward, just entering southern British Columbia of Canada. They live in fields near or above the tree line, with plenty of talus, the rubble of rock shards that break off the steeper peaks and cliffs from water and ice erosion. These piles of rocks give them plenty of shelter from predators and extremes of weather. They use spaces formed inside the rock piles for their dens, only rarely enlarging these by digging. Pikas are generally critters of high, rocky mountains, that often experience extreme winter cold. Even though they all have dense, fluffy coats to protect them, it is still amazing that such small mammals can survive such harsh winters, especially seeing as they don't hibernate! So how do they do it?


Making Hay while the Sun Shines

The trick of the Pika is that it gathers itself a food supply to last out the winter. In this they are somewhat like some rodents such as squirrels and chipmunks. But the pika doesn't store nuts, it stores hay! In the summer when the mountain meadows are in lush growth, it nips off leaves and stems of grasses as well as other plants that it feeds on, sometimes letting them cure in the sun for a while first. It then stores these, usually in special hay larders, under protective rocks to keep off the rain. Only occasionally do they make their hay piles out in the open on top of the talus. Pikas are very discriminate about what they hay, and when. They seek out the plants with the highest nutritional content, especially proteins and fats, as well as moisture.


Another trick pikas use (also shared by rabbits) is consuming their food twice. Unlike cud chewers, which regurgitate their food to chew it again, pikas pass it out at the other end. The first pellets of dung they produce are soft and green. These still contain lots of nutrition. The pikas eat them immediately. The food then passes through their guts a second time, and the second stage dung pellets they produce are blackish and hard, and they do not consume these again. They usually get most of their water needs from the plants they eat, but will take drinks if surface water is available.

Although not hares, pikas are sometimes called Singing Hares. They give a whistling call which they elaborate into a song, given by the male in summer and by both sexes in autumn, which they use to proclaim their territories. They also give piercing alarm calls.


Pika territories may overlap. When a pika strays into the overlapping part of a neighbour's territory, it may suffer no consequences if the other pika is not active at the time. But intrusions become less during the haying season when the pikas are at their most active. Pikas will only rarely fight each other over territory.


Males and females usually pair up if their territories are next to each other. When there are plenty of males available, females will use their discrimination to pick out the best one. Come breeding season the pair will start mating, and only after mating does the female start to ovulate. If mating is successful she'll give birth to a litter of, on average, three young. They are partly furred, blind and helpless at birth, their eyes opening at the age of nine days, weaning and becoming independent at the age of four weeks.

Strangely, pikas are more vulnerable to heat than to cold. Superbly adapted to freezing temperatures with their dense fur, they are in serious danger of overheating when the outside temperature is higher than 25.5° Celsius/77.9° Fahrenheit. When it's hot outside they can flee to the shade inside their dens, but this is only of limited value to them. Warming climate will drive them higher up the mountains, because higher is cooler, but this only works when there is in fact more mountain higher up. Colonies can become crowded around the highest peaks, and some colonies appear to have vanished already. They cannot easily migrate across the hot plains to find other mountains, and so the populations are almost as if trapped on islands with the sea around them rising. The 'Pikas in Peril' project has been started with the aim of assessing just how much at risk the pikas are.