Brush up on your Halloween games NOW.

Did You Ever Play 'Hiram and Mirandy'? 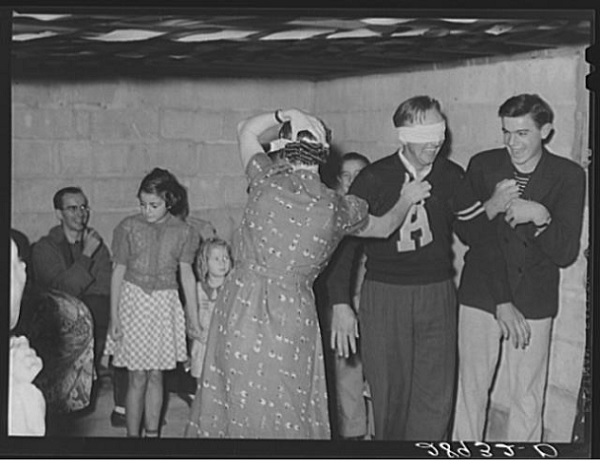 If your answer to the question is 'no', the next query might be, 'Why? Won't your partner let you?' Probably, though, you haven't played 'Hiram and Mirandy' because:

'Hiram and Mirandy' was an icebreaker game played at the livelier sort of parties in the early-to-mid-20th Century in the US. There's not a lot of information available, but we found these instructions:

A man is chosen for Hiram, and a girl for Mirandy. They go inside the circle, where Hiram is blindfolded.


He calls sharply, 'Mirandy.' She answers sweetly, 'Yes, Hiram,' whereupon he dashes in the direction the voice came from, trying to catch her, she, of course, eluding him. He calls constantly and she must answer at once, never leaving the circle. When he catches her she chooses a Hiram and he chooses a Mirandy.

That Young Women's Christian Association was hot to trot, let me tell you. At this point, we invite comparison with their brother organization, the YMCA. We believe in equal opportunity dorkiness at the h2g2 Post.

During the two world wars, apparently, the YWCA was keen on encouraging clean, healthy fun, just like the Village People. Hence the ice breaker book from 1918, which was still in use during WWII. We know this from the 1939 photo taken by the Office of War Information. (Shh! Don't tell the Gestapo!)

So that explains about the game. But there's still one question left: who were Hiram and Mirandy? Not much info on that, but there's an undated piece of sheet music in the University of Mississippi's archives called Hiram and Mirandy: A Novelty Musical Sketch for a Man and Woman. There's no date on the cover, but the price is 40 cents, which points to the 1940s rather than the 1910s. The song starts, 'Oh, Hiram, come get the chores all done,' which doesn't sound very romantic to us. Obviously, the names draw on the old US belief that everybody who lived on farms had hopelessly out-of-date monikers. All Reubens and Dinahs, and not a Kyle or Tiffany in the lot. Bunch of Rubes, as they said then.

Oh, one more question: what's the connection to our October issue? This was at a Halloween party. See? Pretty scary after all. But at least, they didn't meet the Village People.