The history of technology is full of quandaries and ironies.

Oh, to be a submariner… 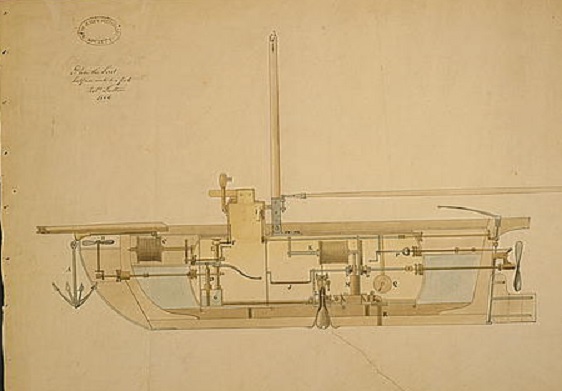 Ah, the little ironies of history. If Napoleon had listened to Robert Fulton, rather than saying, 'Alors! Your steamboat sanks in the Seine, Monsieur!', things might have been different. If the Admiralty had paid more attention to Fulton – who had changed sides, so to speak – rather than preening over Nelson's Trafalgar victory, they might have sunk the whole French fleet in record time. Instead, of course, Fulton went back home to New York, and launched the first commercial steamship, from the Big Apple to Albany. And, although he died young in 1815, he'd already managed to set the stage for the great era of Mississippi steamboat travel, as Mark Twain could have told you. So is life.

This is an 1806 drawing for a submarine by Robert Fulton. We thought you engineering types might enjoy it. Fulton first started designing the things in the 1790s. Hard to imagine a submarine back then…

Modern people are fond of criticising scientists – with some justification – for working for the highest bidder. Social responsibility is important. But it seems that going where the contract is has a long pedigree. Fulton was just trying to get somebody to foot the bill for his nautical wonders, be it the French, the British, or the Yanks.

Which is why the first steam-powered warship was built for the Americans in the War of 1812. (Not that it made any difference.) History is funny like that.