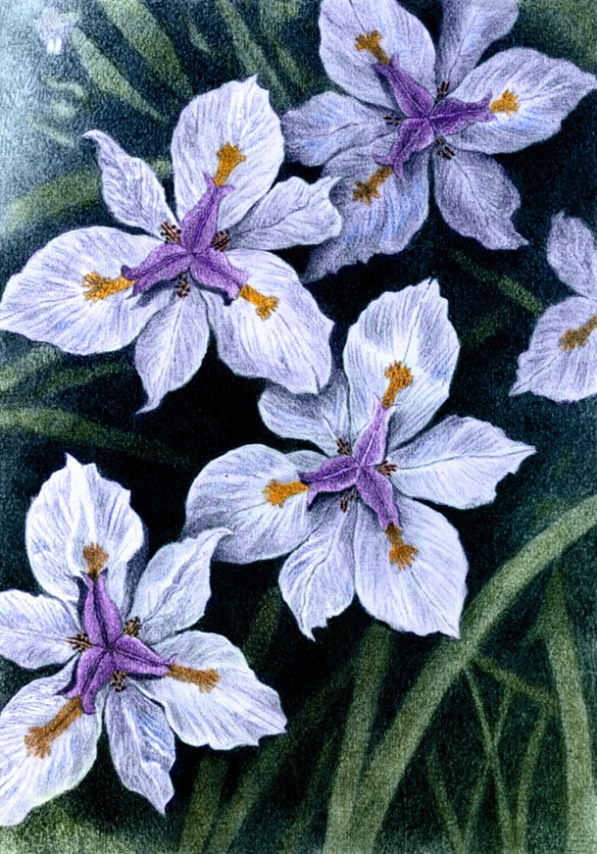 South Africa has an incredible diversity of beautiful flowers. One family that over here includes a vast number of exquisite and unusual flowers, is the Iris Family. Indeed, South Africa has the largest diversity of iris species of any country, with about half of the world's species occurring here. This species, Dietes grandiflora, is also known as the large wild iris. The scientific name 'Dietes' means 'with two relatives', in this case the irises of the genera Moraea and Iris being close relatives. 'Grandiflora' means 'with large flowers'. The genus Dietes contains six species, five occurring in South Africa and the sixth occurring on an island between Australia and New Zealand.


Most of the iris species of South Africa grow in a small part of it, the Fynbos region of the southwestern Cape. But a few beautiful irises are found outside the region, and this is one of those. The fairy iris grows on forest edges and along streams from the forested regions of Kysna and Tsitsikamma in the Eastern Cape to about the middle of the Kwazulu-Natal province. Its natural distribution is generally not far from the ocean. It flourishes in the moist and temperate to subtropical climate of this region. The plants form large clumps, growing in dappled shade or in full sun. The leaves are straight, upright and sword-like, held in a fan shape. They reach a length of 1 m/yard. The flower stems also reach a height of 1 m, the flowers consequently being borne at the level of the tallest leaves. The flowers are large, reaching a diameter of 10 cm/4", and delicate-looking, often produced in profusion. The individual flowers are short-lived, but the plant rapidly produces new flowers. They attract bees and other pollinating insects. On the flowers, the orange-yellow sections are nectar guides, showing the insects where the centre of the flower is so they can land and get their nectar quickly! The common name comes from the delicate white petals' resemblance to fairy wings.

This iris is easy to grow and widely planted in South Africa. It can be grown from seed. The fruit are capsules that split to release the shiny seeds. Collect these and sow on a well-draining soil mix with a god amount of compost, and sprinkle a layer of sand over them. (You can also order seeds of the Fairy Iris from reputable seed suppliers like Silverhill Seeds.) Keep them moist, and germination should happen in a week or few. The species can also be propagated by dividing large clumps. These irises can be grown in fairly poor soil and can withstand light drought, moderate frost, and moderate shade. But it does enjoy fertile soil and frequent watering. It shouldn't be kept too wet over the winter though, especially if it's a cold one. It grows very well in light shade, and is ideal for filling a garden bed underneath a big tree. It can be planted with other bulbous plants like Agapanthus, Gladiolus, Kniphofia, Tulbaghia or Clivia, for a good display. These irises keep their leaves year-round.