Well, we're not here to sell cookies... So they know something's up 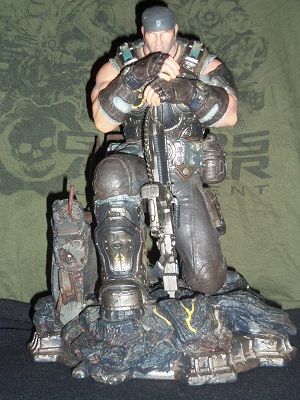 This is Marcus Fenix1 the leader of Delta Squad, a war hero, former prison inmate and now the last hope for humanity.

This statue came with the Epic edition Gears of War 3 and is 28cm tall. It usually sits on the fireplace in my lounge.

I'd not really played Gears before, except the occasional foray into Horde mode2 although I had watched others playing the campaign, I didn't really think it was for me. Oh, how wrong I was.

I was a little unsure at first but after getting about half way through 3, I had to go back to the very beginning and play all the games. On Insane Difficulty.

What makes Marcus so memorable? Well look at him, one mean Badass who kicks locust bum before breakfast and saves the planet from the grubs. Again.

Ugh, I think I got some on me, now I got the cooties

1For cactuscafe.2A Coop battlefield where you have to fight waves and waves of oncoming enemies.