Playing for the King 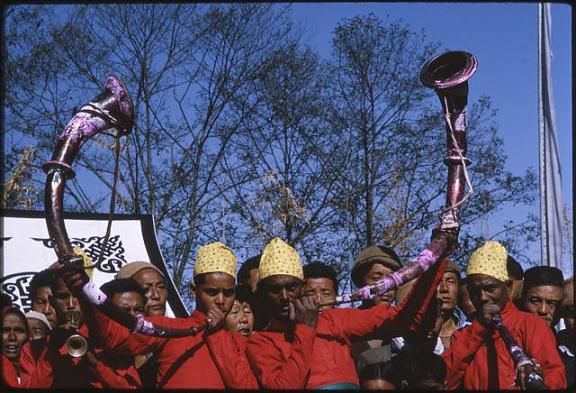 This picture was taken in 1965 by Alice S Kandell. It shows Nepalese horn players performing at the coronation of the King of Sikkim.

Yeah, we had to look it up, too. It's a landlocked state in the north of India, and it has a town in it called Yumesongdong. That's our kind of place: exotic, and with cool nomenclature.

There are 610,577 people in Sikkim, which is in the Himalayas. Some of them are Sherpa. Now, we're going to dream about those horns. Want to hear some? You might regret it: we're not sure what the Nepalese had against the King of Sikkim. This band sounds sort of like heavy traffic, only with a back beat. Do you remember that movie, The Man Who Would Be King? We suspect that Sean Connery may have heard something like this just before he went off that rope bridge. That's why he was singing so loudly.