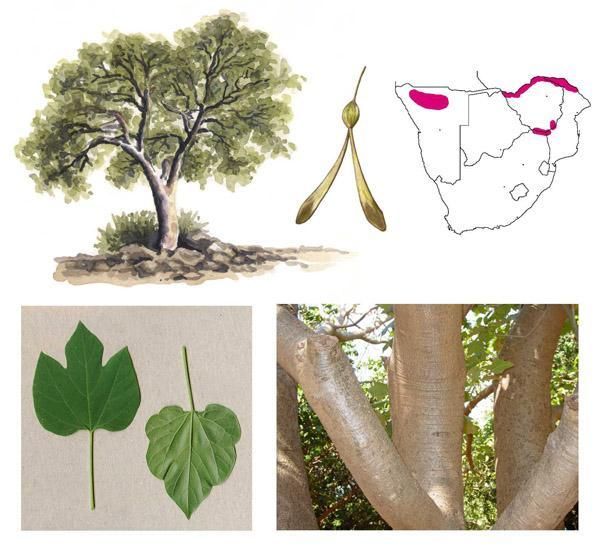 This, the Helicopter or Propeller Tree, Gyrocarpus americanus, is a very poorly known tree in South Africa. But it occurs widely in the world, indeed being a pan-tropical species, occurring in warm regions in Africa, Asia, Australia, Madagascar, Central and South America. It belongs to a small family, the Hernandiaceae which doesn't include any well-known plant species, but is an important component of tropical laurel and montane forests. In South Africa the subspecies africanus is found. It grows only in hot, dry regions in the very far north. The map shows its distribution in South Africa, Mozambique, Zimbabwe and Namibia. It typically grows in open woodland or dry scrub on rocky hills or north-facing mountain slopes. I've only seen a couple of individuals in the wild thus far. They are fairly easy to recognize. Their leaves look like nothing else: they're quite large, reaching 20 cm/8" in diameter, and three-lobed. The leaves have three or five prominent veins diverging from the base, and long stems. The prominence of the lobes vary, some leaves being almost unlobed, some having deeply incised lobes. I show here two different leaves from the same tree, scanned in. My photo shows the fresh green leaves of a young specimen, which are soft and velvety. On an adult tree you might very well find numerous differently-shaped leaves. The tree has a fairly open canopy. In late autumn the leaves become yellow and brown, and fall from the tree in the winter. They dry out very thin and brittle; if you crush a fallen leaf in your hand, you can turn it into fine powder. 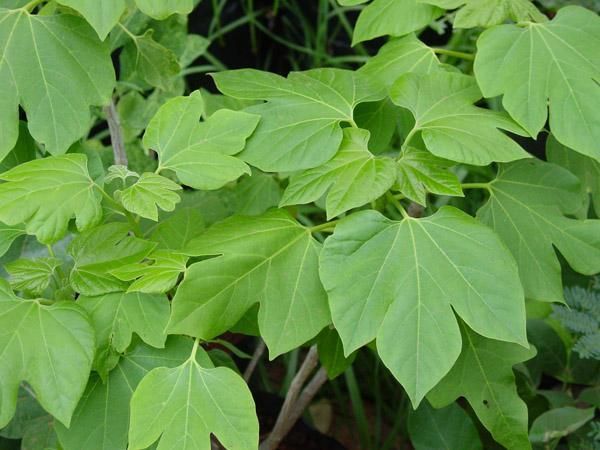 But even without leaves, the helicopter tree can be easy to identify. It has long, thick, robust twigs, and a smooth, shiny bark. The bark is thick and succulent in appearance. The trunk and branches I show here are of a tree growing at the University of Limpopo; it is a large specimen and the bark is well shaded. In trees standing in full sun, the bark 'bleaches' to a striking whitish. Trees mostly grow straight and are well-formed. These trees can reach 15 m/50' in height and spread.

This tree gets its name from its distinctive fruit. The fruit, which follows the very small flowers, consists of a hard, round capsule containing the seeds, and on the tip of this there are two narrow, flat 'wings'. These are angled obliquely outward. When the fruit falls from the tree, the airflow over the wings causes it to whirl round like a helicopter's blades, or the propeller of a plane. This causes the fruit to 'fly' sideways, ensuring that it lands some distance from the trunk of its parent. This method doesn't disperse the fruit very far, though, and helicopter trees are rare and localized in occurrence here in South Africa. There are numerous not-closely-related tree species that also have propellering fruit, elsewhere in the world, but those have differently shaped and arranged wings on their fruits.


Because of its rarity, there aren't known traditional medicinal uses for this tree in South Africa, but its bark contains alkaloids, some of which might be useful in treating heart ailments. The tree also exudes a white latex that can be used to make rubber. Its wood is soft and light and not used. Not many animals eat its leaves.


Helicopters in the Garden

The helicopter tree has several attractions for the gardener. It is a neatly-shaped tree, which doesn't grow overwhelmingly big and not too shady, even a large specimen allowing a lot of sunlight to pass through the open canopy. It grows quite rapidly, young trees putting on a meter/yard of height a year. Although it is deciduous, its fallen leaves are so fine that they are soon no more than fine powder on the ground. Helicopter trees can withstand a long winter drought. Their greatest vulnerability is to cold or moist weather … they can get fungal infections. But they are excellent in hot, dry climates. They are very well suited for large succulent beds or rock gardens. They like full sun best, and will provide light shade and shelter for smaller plants.


Helicopter trees are easily grown from seeds. These are large and easy to handle. Unfortunately they are not easy to get one's hands on. You might get them, or young trees, from specialist tropical and succulent nurseries or seed sellers. Since helicopter trees are pantropical, they can be grown in the warmer parts of North and South America, Africa, Asia and Australia. I am not sure if they'll do in the open in southern Europe, which even at its warmest might be just a tad too frosty. It might be possible to grow them there; perhaps if the tree is sheltered against frost for the first three to five years of its life, being covered with netting on cold nights, or with straw packed around it. At the same time, more frost-resistant shrubs can be planted around its trunk so that these can shelter it when adult. If this is done, and it is given the warmest, sunniest spot in the garden, it might just survive and grow into a fine tree in southern Europe.


In the north of South Africa, that is to say in most of the Limpopo Province and the warmer parts of Mpumalanga and Kwazulu-Natal, this tree grows fine outdoors, only young trees needing a bit of frost protection. I have one in my show garden that is doing very well. Because this tree is a summer grower, the seeds should best be planted at the start of spring. Soil should be well-draining with a bit of compost. Keep the seeds moist, not wet, and in a warm place. They should germinate within two to three weeks. Let the young plants grow a season or two before planting into individual bags, and be careful not to damage their roots. You might even sow the seeds individually in bags right from the start. Don't overwater the young plants. Adult plants also do best on moderate watering.


It just might be possible to grow this tree from cuttings. I haven't found anything in the literature confirming this, but I will try myself and report back if I achieve success.