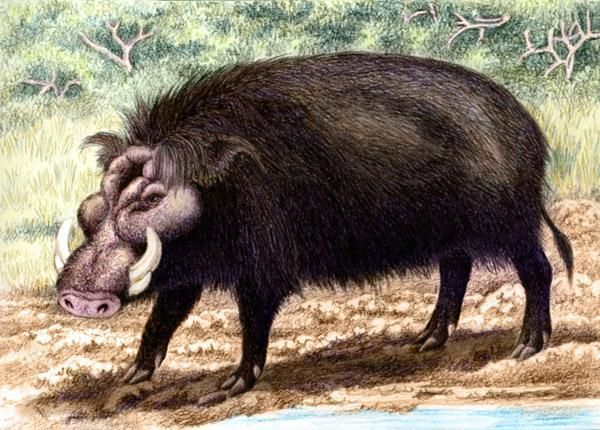 This time I bring you one of Africa's ugliest mammals – but it deserves our love! This is the Giant Forest Hog, Hylochoerus meinertzhageni. It is a very large hog, and indeed the world's largest wild pig. It can exceed 275 kg/600 lbs in bodyweight. The boar can be about 50 kg/110 lbs heavier than the sow. Both sexes are covered in long, shaggy, blackish hair.

This hog is related to the Bushpig and Warthog of Africa. Of the two, it is closer to the bushpig, but it has large facial bumps like the 'warts' of a warthog. There are two cheek swellings, and bumps all around the eyes and on top of the forehead. The bumps around the eyes contain scent glands that are especially active during and after fights between the males. The bumps on the forehead are in a ring forming a small, hollow bowl. They also have use during fights. Male forest hogs fighting for dominance or territory will shove each other with their snouts, but they will also run at each other and smash their heads together. The bumps cushion these blows – not perfectly though! If the males should collide with the two bowls aligned perfectly edge to edge, there will resound a crack like a rifle shot! Usually it is just a frightening noise, but sometimes there is an actual crack – pigs have been known to break their skulls during these contests. But this is not the end for these tough pigs! They have a skull structure where the brain is contained in a very solid 'capsule' not firmly connected with the rest of the skull, so the brain can remain uninjured, and the rest of the cracked skull will heal and the pig will live to fight another day!


Grazers of the Glades

Africa has lots of different habitats. Warthogs are pigs adapted to open, grassy savannahs; one species is found in dry semi-desert scrub. Bushpigs live in denser bushland and forest. The giant forest hog is found in the rainforest belt, but actually feeds in open patches inside the forest. In East Africa they occur high in montane or bamboo forest. They prefer to feed in glades with lots of soft, fresh grass. They will also graze on the edges of the forest. They never stray far from the cover of tall trees, though. The forest provides them with shelter and sleeping places, streams to drink from, and mud to wallow in. But they are fairly specialized in feeding mainly on grass. They have well developed cheek teeth and much of their huge skulls is modified to provide anchorage points for their powerful chewing muscles. They don't root in the dirt as much as other pigs do. They will eat a bit of other plant material such as leaves or fallen fruits, and may eat some animal food as well. An interesting behaviour of theirs is ingesting 'salts'. But they don't just lick salty rocks, they dig out and consume salty soil. After this, their dung can be mostly mud!

Giant hog society is based around a sow and her offspring. Her children of up to three generations will accompany her, forming troops of 10 to 14 members. Dominant boars may attach themselves to these groups, defending the females and youngsters against other boars or against predators. Sometimes another boar or two will join the group, but stay subservient to the dominant boar. The troops may also associate with other neighbour families. The groups roam around and change their sleeping places frequently. In each site they will all defecate in one area called a latrine. The latrine will contain smells of all the group members and helps to proclaim their occupation of their territory.


In the dense forest, the pigs trot out well-worn footpaths between the places they frequent such as sleeping sites, water holes, latrines, mineral licks and feeding meadows. They grunt to each other to keep in close touch, and will bark loudly to make contact with group members further off. The dominant boar will advertise with a crescendo of trumpeting grunts.


Because these equatorial forests don't really have seasons, giant hogs can have litters any time of the year, but there seem to be peaks in January to March, and July to September. Up to 11 piglets may be born. The mother constructs a nest for them of grass or dry branches to keep them warm and to conceal them. Piglets of the eastern populations are uniform brownish, but the western forms have striped piglets like other wild pigs. The stripes fade as they grow. They wean at 9 weeks and are sexually mature at 18 months. Like other pigs, the babies are very vulnerable and most die before reaching adulthood. An adult giant hog, however, has few enemies and can live for 18 years.

Today the giant hog is still reasonably abundant and widespread. They are hunted in many places and are fairly easy to kill. They are considered endangered in the most western part of their range. They are protected in a few reserves and national parks. The places where they can be most easily seen are the Queen Elizabeth National Park in Uganda, and the Virunga National Park in Zaire.