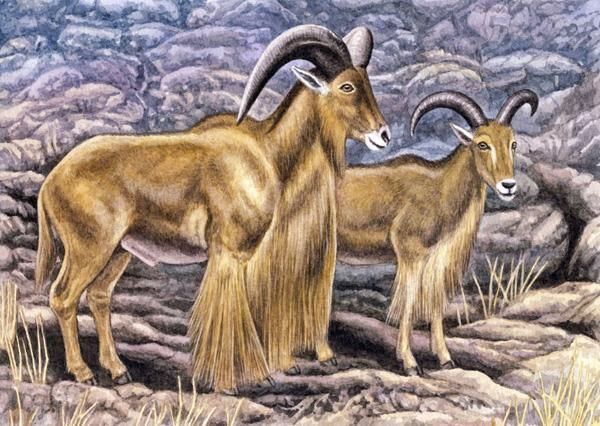 These strange and impressive hoofed mammals are Barbary Sheep, Ammotragus lervia, also known as Aoudad. This species is not quite a proper sheep, actually being somewhat intermediate between sheep and goats. The scientific name 'Ammotragus' means 'sand goat', while the species name 'lervia' comes from the name 'lerwee' supposedly applied to wild sheep in Northern Africa, noted by traveller the Reverend T. Shaw.


Strange Sheepoid of the Sahara

The tribe to which it belongs, the Caprini, includes all wild sheep, goats, mux oxen, takins, chamois, and a few other goat- or sheeplike animals. The group is diverse and abundant in Eurasia, but had difficulty getting a foothold in sub-Saharan Africa. There are too many antelopes that compete with them on the plains of tropical Africa. The caprines are however adept at living in very harsh environments such as deserts and mountains. The Nubian Ibex is one other African caprine, which along with the Walia Ibex managed to colonize northeast Africa, living in the mountains. The Barbary Sheep lives in the Sahara Desert! It inhabits rocky and mountainous regions, not the sand dunes (in spite of its scientific name). Few people may realize it, but the Sahara is not all sand. There is a lot of rocky terrain, both flat and mountainous.


In the central Sahara there are several mountain ranges that are vast in extent as well as in elevation, such as the Hoggar, Tibesti, Darfur and Aïr Massif. The highest mountains exceed 3000m/10 000 ft in elevation, and are very rugged, the desert winds sand-blasting them into otherworldly formations. The sheep live on and around these mountain ranges, and also in the Atlas Mountains and in eastern Egypt around the edges of the Sahara. There are regions where the sheep inhabit less mountainous terrain, such as in Libya. They will for instance live on the slopes of river valleys, or wadis. These rarely contain any water. But in the Sahara, there are infrequent years when rain actually falls, sometimes in heavy thunderstorms, in which case rivers briefly come into flood and rapidly erode deep valleys. The steep sides of these suit the sheep as well as mountains. There are six different sub-species of Barbary Sheep recognized today, their populations being separated from each other by extensive areas of sand dunes.


The prime requirement for the Barbary sheep is shelter. They use caves, rock overhangs or trees for protection against the merciless desert sun. They spend the hottest parts of the day in the shade, but move out at cooler times and also at night to graze and browse. Even in the desert there are plants, especially where there are rocky nooks and crevices that offer them some protection. These sheep, like other sheep and goats, have no trouble consuming the tough desert shrubs and grass. They will even stand on their hind legs to browse the leaves of the very few small and hardy trees that manage to grow there. Like many desert mammals, they don't need to drink, receiving as much moisture as they need from the plants' leaves. They also get a tiny bit of added moisture from the dew that sometimes form on the plants over cold desert nights.

The outstanding feature of the Barbary Sheep is the long 'curtain' of woolly hair both the ram and the ewe carry below their necks and upper chests. In the ram, this curtain can reach right to the ground! There is also a fringe of long hair on the upper forelegs, again longer in the male. The ram is generally more than twice the size of the ewe: 100-140 kg/220-310 lbs compared to 40-55 kg/90-120 lbs. He also has longer and stouter horns. But the neck curtain is the ram's most impressive feature. It has a display function. These sheep have rather large ranges. They need to cover much territory in order to find enough food. But proclaiming and defending this territory could be a great drain on energy. So, the sheep avoid too much active competition by sizing each other up. As in many other mammals, an individual male's prominent display features – the horns and neck curtain – are directly correlated with its size, strength and vigour. Therefore two rams contesting a territory will pose to each other first. The one with the more impressive horns and tassels will appear much larger and intimidating and most of the time the smaller one will beat a retreat, fighting avoided. So, both of them will save the energy they would have spent in a fight. If the two are too evenly matched, and both are willing to risk it, they will fight, clashing their horns together until one clearly overpowers the other. Such clashes are very expensive to both.

The Sahara Desert is situated around the divide between the tropics and the temperate regions. As such, its climate is extremely hot in the summer, but winter nights can be bitterly cold. Of course there is the overall almost entire absence of water, and extreme sparseness of vegetation. The Sahara is actually a fairly young desert, having been much milder in climate some thousands of years ago. Apart from fossil and geological evidence there are wonderful rock paintings made in what is now the middle of the desert, by hunting tribes who recorded a wealth of animals that today are only found in the tropical savannahs much further to the south. Even in the times of the Roman Empire, there were regions where grain could be cultivated that today are barren. Furthermore there are cypress trees in the Sahara that are still alive and growing, having germinated a few thousands of years ago. Today in these places there is no way a young cypress tree will have enough water to sustain its growth, so these few hangers-on are the final remnants of forests that are now vanished.


While the other game vanished as the deserts dried out, the sheep, too are still hanging on. In the summer their coats are short and sleek, apart from the long throat tassels, which don't cause them to get inconveniently hot. In the winter the sheep develop longer woolly coats, which are harsher in texture than the wool of domestic sheep. They moult these again at the start of summer. Their short tails also have long tassels of hair on the top but are naked below and have scent glands the sheep use in marking their territories.


The normal society of this sheep is a small flock, with one adult ram lording it over a number of ewes and their offspring. Young rams will be tolerated if they don't pose any immediate threat to the ruling ram. On occasion, in the dry season (though there's not much of a wet season to speak of in the Sahara) flocks will group together into larger flocks. They are nomadic and move around widely in search of acceptable browse.


One benefit the Barbary Sheep enjoys in its native habitat is an absence of large predators. Today neither lions nor leopards nor spotted hyenas occur in the Sahara. Lions and leopards used to occur in parts of their range, and they still have ingrained predator-avoidance behaviour, running up into the steeper parts of the mountains if feeling threatened. They are very agile and excellent leapers.


The rut happens at the end of autumn, and the gestation period is 150-160 days. The ewe gives birth to one or two lambs. She chooses a sheltered spot where she will leave them hidden as she goes to feed, returning to suckle them. They soon accompany her on foraging trips. At eighteen months they are mature. These sheep have been noted to live for 24 years.

In these sheep's vast natural range they occur at low densities but still in reasonable numbers and are less threatened than some of the Sahara's other denizens like the Addax, Scimitar Oryx or Dama Gazelle. Still, they are hunted and eaten by many people and, with modern transportation, not even their remotest haunts are out of reach. But they have also benefited from humans. They have been taken out of Africa and introduced in the wild in the southern USA as well as in southern Europe, where they are flourishing. They've also been introduced in places that make less sense such as Hawaii, with a much-too-wet tropical climate, and the Canary Islands, where they are a problem because they eat too much of those islands' fascinating endemic plants. Also they are hunted a lot in the USA. I don't like that much, Americans taking our African animals just to kill them! There are many populations in zoos across the world also. In times past the species might have lived outside of Africa in the middle East, particularly in Israel.