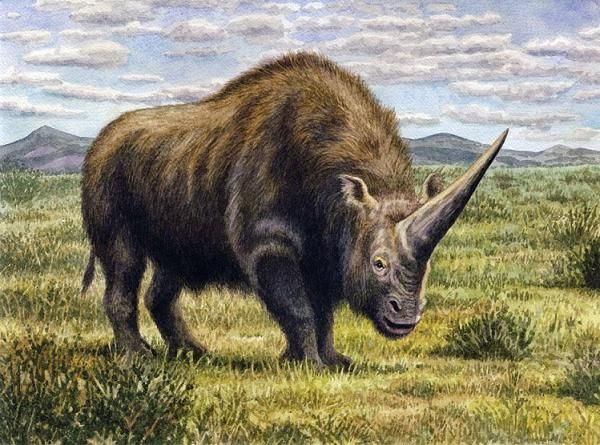 For a bit of a change, I'd like to feature a creature that today is, sadly, extinct. This is the Giant Unicorn, the Elasmotherium. (I've briefly discussed it before but I think it deserves a proper entry.) The species I illustrate here is the largest one known, Elasmotherium caucasicum. It could reach about 5 m/17' in overall length, and 2.5m/a bit over 8' in height at the shoulder hump. It could probably reach about 4.5 tonnes in weight, making it as heavy as a woolly mammoth. Elasmotherium lived from about 2.6 million years ago, to 50 000 years ago, or perhaps less … it might have been around long enough that some folk tales based on it still survive as I'll discuss later.

This was a species of true rhinoceros, and indeed the largest one we know of. Long before it there lived another huge rhinoceros relative, the Paraceratherium, but this one was not in the same family as modern rhinos, instead belonging to the Hyracodontidae, a family of hornless, rather horse-like rhinos. The Elasmotherium was essentially a modern rhino, the most distinctive feature of it, aside from its single horn, being high-crowned cheek teeth that kept growing throughout its life. It probably lived on cold steppe country where it munched on tough grass.


On the same cold steppes, and also further north, occurred another kind of rhino, the Woolly Rhino. It was covered in a shaggy coat of long hair. We don't at present know if Elasmotherium was also hairy, but the coldness of its habitat suggest that it might have been. But some Elasmotheriums lived in regions that were not quite as cold, and might have had naked skins like most modern rhinos (the Sumatran rhino does have quite a bit of hair).


No actual horn of Elasmotherium has (at the time I'm writing this) been found. The existence of a huge horn is surmised because its skull has a large round bump on it right above its eyes, as would be an excellent base for supporting a horn. Rhino horns aren't made of bone, instead being made of keratin, the same substance as hair and fingernails. In modern rhinos the horn is basically compacted hair. Some rhino fossils have been found with the horns preserved, but so far not Elasmotherium. Thus, how big and how thick the horn was, is speculation, as is its shape. But there is one clue. There is a cave painting in France showing a single-horned rhino, which pretty much had to be an Elasmotherium since all other rhinos that lived in the region at the time were two-horned. This shows the horn as being very long and slightly curved. The painting also shows it with a huge hump over its shoulders, and head held very low. This is consistent with the skeletons we have and with its dentition strongly suggesting that it was a grazer.


Apart from its huge shoulder hump, Elasmotherium had a powerfully built, compact body. Its legs were fairly long for a rhino and it might have been a fast runner. Some reconstructions show it as rather horse-like, but the skeletons I've seen seem to indicate a more heavily built animal, much like the modern white rhino but with a proportionally shorter body with longer legs. White rhinos can gallop very fast, so Elasmotherium might have been even faster. It probably did not have many enemies though! An adult would have been too much for even the biggest lions or bears. Its horn would have been a great defense. Apart from that it might have used the horn to brush snow away to get at the grass underneath in the winter.


Fossils of Elasmotherium have been found from eastern Europe through most of the central and northern parts of Asia up to eastern China. If the cave painting in France does indeed portray one, then it lived in western Europe as well. (There's no reason why it couldn't, there not being any barrier between eastern and western Europe at the time.) At present we recognize three species: Elasmotherium sibiricum, the best known, Elasmotherium caucasicum, and Elasmotherium chaprovicum.

There are folk tales from China, Central Asia, Russia and Iran that mention one-horned beasts, which might be supposed to have been inspired by this real-life unicorn. But that is very hard to establish for certain, since there are so many wholly imagined mythological monsters, and the various kinds of unicorns generally have lots of really fantastic qualities. The most credible account comes from the medieval traveler, Ibn Fadlan. He mentions a creature living in the Volga River region (Russia) that sounds like a regular flesh-and-blood animal, about the size of a bull, with a single horn. He says that the animal will unhorse riders with its horn and then kill them, but without doing any harm to the horse. Hunters supposedly killed it with poison arrows, and make bowls from the base of the horn. He even says that the locals said that the creature was a rhinoceros. If true then the Elasmotherium indeed must have become extinct in the region quite recently, since it is unlikely tales of an animal would persist without great alteration or embellishment for more than a few centuries.


But no other evidence for the recent survival of this huge rhinoceros exists. The cave painting is the only really good evidence for modern humans ever having seen living specimens, and those paintings are about ten thousand years old.