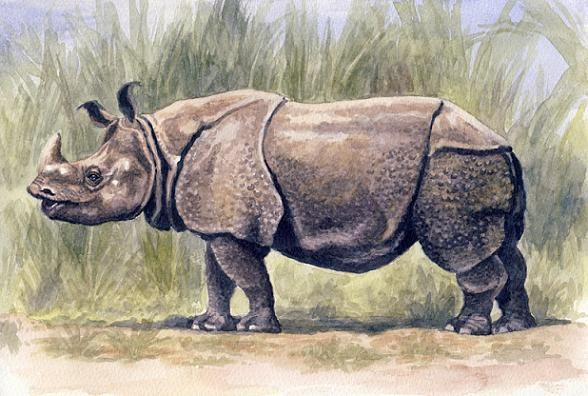 This is a painting of a Greater One-Horned Rhino, Rhinoceros unicornis, also known as the Indian Rhino or Asian One-Horned Rhino. Both of the latter names are slightly inaccurate. First of all, it is one of two rhino species living in Asia that have only a single horn, the other being the Javan Rhinoceros which is slightly smaller. Its other name is inaccurate because it is not restricted to India, currently occurring in Nepal as well. In the past it lived all across the northern part of the Indian subcontinent, from Pakistan to the border of India and Burma, and might have extended into China and Vietnam as well.


But irrespective of its name, this rhino is a very impressive animal. It has the most armour-plated-appearing skin of any rhinoceros. This thick skin has deep folds over the neck, shoulders and hindquarters, resembling the joints between separate steel plates of an armour suit allowing for movement of the limbs. The males, especially, develop deep folds in the skin below the neck as well. Additionally, there are raised, round bumps on the skin covering the limbs and trunk. The German artist Albrecht Dürer was one of the first people to illustrate this imposing beast. His rhinoceros appeared to be clad in elaborately crafted plate armour on its body and upper limbs, with scale armour on its legs. In addition, and weirdly, it also had a screw-like spike on its upper neck! Dürer probably copied it from a much rougher drawing by someone who had actually seen a living Indian rhino, and added some imaginative elaborations. Still, one can clearly recognize his portrayal as being of this species.


Indian rhinos are the second largest mammal species on the Asian continent. Only the Asian elephant is bigger. It is still unclear just how big this rhino can get; I have seen quoted weights of up to 4 tons/8 800 pounds, but nothing that would reliably verify this. I doubt this figure … I tend to doubt the more extreme claims given for many things … seeing as a big bull African bush elephant weighs in at 6 tons, it’s hard to imagine a rhino coming close to this. I think a more likely maximum weight would be 2 tons/4 400 lbs. I would be quite delighted to know for sure if they can indeed exceed this.


While bodyweight is hard to verify, since it is not very easy to put such a big thing on a scale, or even find a scale big enough to put it on, measurements are somewhat easier. This rhino can reach 4 m/13 ft in length, and exceed 185 cm/6 ft in height at the shoulder. The skull is huge and wide. The single horn on this rhino is generally much smaller than the front horns of the two African two-horned rhino species, averaging 25 cm/10" in length, but has been recorded as reaching almost 60 cm/2'. Still, this rhino, too, is being hunted for the sake of its horn. This is quite illegal of course; this species is protected by law everywhere that it is found, but the problem is that there are so many poor people in India and Nepal and the horn is extremely sought after, and can net a poacher a most bedazzling amount of money. To conserve this and many other species we absolutely need to take into account the human factor.


This rhino is the most amphibious of all living rhino species. Its natural habitat is river floodplains with tall grass; it sometimes ventures into adjacent forest or swamps. These rhinos often wallow or swim in lakes, rivers and ponds, which helps them keep cool. Males have territories, but these are not clearly defined, and not very meticulously defended. When rival males do meet, they will charge at each other, and sometimes fight. Unlike the African species, this rhino doesn’t really use its horn for fighting. Instead, it uses the sharp, tusk-like incisors (front teeth) in its lower jaw. (African rhinos lack these teeth; the fronts of their jaws are toothless and they use their lips for cropping vegetation.) During the mating season, bull Indian rhinos will pursue the females aggressively; they have been recorded chasing them for long distances and sometimes even fighting with them! Fighting between rhinos sometimes results in deaths.


Like all rhinos, this species is a herbivore, and mainly grazes on the lush grass of the plains, but will also eat fruit and nibble leaves and twigs. It will also eat aquatic plants, sometimes submerging itself to get at them. They will push over small saplings to get at the tender leaves at their tops. They, too, use the lips for grasping and plucking off the leaves, leaving their tusks for fighting. Grazing rhinos are often accompanied by birds. Mynahs, a kind of starling, peck ticks and other parasites off their skins, as do the distantly related Oxpeckers with the African rhinos. Cattle egrets also surround or sometimes even perch on them, but they mainly watch for invertebrates scared out of the grass by the plodding rhinos, which they will swoop on and eat. Adult males are solitary, but females sometimes form small groups, mostly with their own children or relatives. Subadult males sometimes band together in small groups. Rhinos sometimes congregate at mud wallows. They interact with each other by vocalisations, more than 10 different sounds having been recorded, gestures like head bobbing, and physical contact like nuzzling or licking each other. Rhinos will even play together, chasing each other and engaging in sparring. As in other rhinos, their dung is an important social element, being deposited in heaps and indicating territories as well as identifying individuals. They also deposit their scent by rubbing trees and other things wherever they go.


A factor making this species vulnerable to humans is its slow breeding rate. Indian rhino females start breeding around the age of six, and males may need to be older than fifteen because of competition with older, larger, stronger individuals. The gestation period is very long, just under sixteen months, and the interval between calves is typically three to five years. On the plus side, they can breed at any time of the year. Only a single calf, weighing 60 kg/130 lbs on average, is born. The calf will stay with the mother until she’s about to give birth to the next one.


In the wild these rhinos can live for forty years. Their longevity therefore makes up for their slow breeding rate, provided that they are not killed by humans. Currently the world population of this species stands at somewhat over two thousand individuals, and there are at the time of writing about 175 of them in zoos around the world. In India and Nepal they are aggressively protected in the few game reserves and parks where they occur, and despite poaching the populations are overall slowly expanding. But there are human pressures, not just in the form of hunting, but also habitat modification and destruction. Conserving this species over the long term, as with many others, calls for humanity as a whole to reassess the way it is living and its relationships with the other species on this planet. 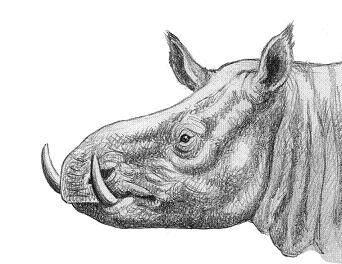 I have already spoken about prehistoric rhino species in my entries on the White Rhino and the Sumatran Rhino, but today I include for you a few sketches! The first is an ancient rhino called Chilotherium, which lived in Europe and Asia. This one was hornless, but also had tusks in its lower jaw like the Indian Rhino does. But in its case they were much, much bigger! They must have protruded from its mouth in real life, giving it a rather funny appearance … I have not yet seen a portrayal of it that satisfied me, but here I’m giving it my own best shot. These tusks couldn’t have been practical for anything but display and fighting. 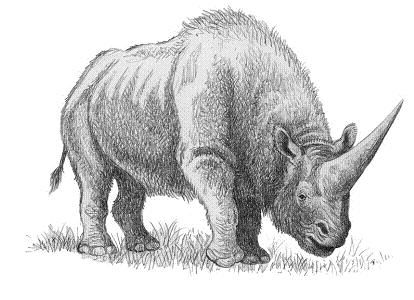 The next picture is of an Elasmotherium. This was a huge rhinoceros, with an enormous hump over its shoulders, standing taller than any modern species. It lived on the cold, dry, short-grass steppes of central Asia. It might have survived long enough for some ancient humans to see it. There are even claims that the legendary creature, the Unicorn, might be based on it. It had a single horn right on its forehead but unfortunately in no fossil has the horn itself been preserved. The huge bump on the forehead does seem to suggest that the overlying keratin horn might have been very large. This rhinoceros was fairly long-legged, perhaps quite a fast runner, and chewed the tough steppe grasses with its huge, high-crowned cheek teeth. 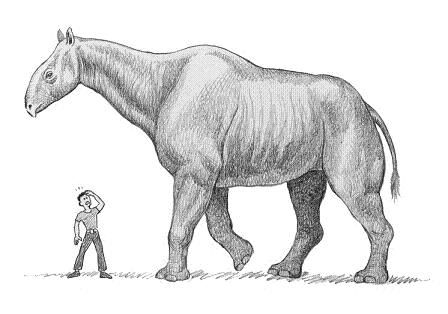 The last picture is of a Paraceratherium. This one sometimes goes under alternative names such as Indricotherium and Baluchitherium. This massive beast lived 30-40 million years ago, and belonged to a branch of the rhino tree that was hornless and more horse-like. This one had a fairly long neck and legs as well. It could measure over 5 m/16 ft at the shoulder! It is the largest known land mammal ever, although there are claims some mammoths could have rivaled it in overall weight. Its bodyweight is somewhat disputed, but could have been in the order of 10 to 20 tons. There are a few species attributed to this genus, and they, too, lived in central Asia. The nasal bones seem to indicate that they had a prehensile upper lip or even a short trunk like a tapir; they, too, had tusk-like front teeth in both the upper and lower jaws. Not much is known of how they lived, but they seem to have been browsers and with their size would perhaps have lived in savannah-like open woodland rather than in dense forests.


The only living rhino species I still have to write about for this column is the African Black Rhino, Diceros bicornis. I shall do that soon, perhaps with a few more sketches as well. And maybe I should do an entry purely about extinct rhinos, because there are so many that I still wish to tell you all about! I’ll try to do a full colour painting of one or two species, plus a few more pencil sketches.