Travel broadens the mind. At least, we think it does… 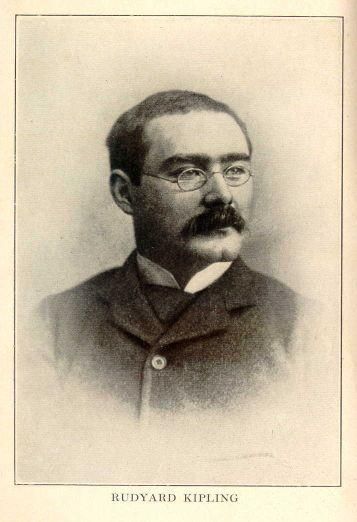 This is a picture of Rudyard Kipling. He's very recognisable. He was already a bit of a celebrity when he visited Beaver, Pennsylvania, at the age of 24. There was a lady involved. Okay, the lady was married. No, there was no hanky-panky. But Kipling liked Mrs Edmonia Hill, a college professor's wife he'd got to know in India. When the lady – 'Ted' to her friends – had to go home to Beaver to convalesce from a bout of meningitis, Kipling resolved to visit her. So he arrived in western Pennsylvania in 1889. They put him up at Beaver College. Yes, there's a Beaver College.

According to a letter Mrs Hill wrote to some friends, Kipling ' has a living room with open fireplace, a spacious bedroom and bath. There is a couch, where I think he spends most of his time, smoking, reading, and meditating, but not doing much writing. He is absorbing the experiences which are so different in Pennsylvania surroundings from his Lahore days.'

According to local legend, the Beaver teenagers thought Kipling was an insufferable snob, and beat him up. We cannot verify this legend, but pass it along for completeness' sake.

What did Kipling think of Beaver? Well, he wrote about it. He changed the name to 'Musquash', and claimed it was on the Monongahela instead of the Ohio. As for the name Musquash, we suspect sarcasm, and we're willing to bet he just liked writing 'Monongahela', because, frankly, everybody does.

Here's a bit of his prose:

The golden-rod blazed in the pastures against the green of the mulleins, and the cows picked their way home through the twisted paths between the blackberry bushes. All summer was on the orchards, and the apples – such apples as we dream of when we eat the woolly imitations of Kashmir – were ripe and toothsome…

…Also it was impossible to buy openly any liquor in that little paradise. But – and this is a serious but – you could by procuring a medical certificate get strong drinks from the chemist.

We're glad he didn't go thirsty. And that he liked the apples and blackberries. All in all, it probably wasn't a bad visit. It was also probably as much excitement as Beaver, PA, could stand for one year.