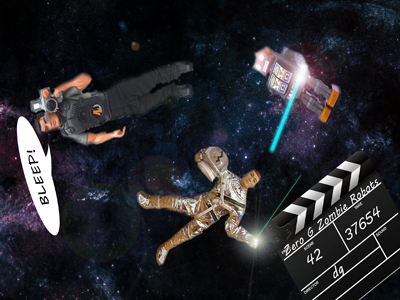 "We're coming in to land," James Waveney said, as he piloted his spacecraft towards the surface of the planet. He was proud of himself, landing his first inter-planetary mission without a hitch. At 22, he was the youngest pilot in the Space Corps and academically one of the ablest.

James gave a glance at the older man, who hadn't bothered to shave the last few days, leaving dark stubble on his chin, while there were grey streaks in his hair. Although James could feel Chuck's resentment at being his subordinate, that only made him more determined to prove himself. He'd made sure he was fully briefed about the mission and the planet. The only surprises were likely to be those of scientific research.

They had landed in a shallow crater and the rim of reddish rock was not far away. HQ's instructions were clear enough – to explore on foot the first day, then take the rover for a longer trip to some mountains to the east. There might be interesting minerals there.

He lowered the steps, and stepped down onto the planet's surface. Sand. "It's firm enough to walk. Come on down."

Chuck clattered down the steps and looked round. "Can't see further than the crater's rim. Better keep our eyes peeled."

James nodded. "But there are no known hazards here."

James controlled an urge to tell Chuck to be more positive. But Chuck had flown twenty flights and, on one of them, narrowly escaped being captured by slave traders. That might explain his caution. Looking through binoculars at the crater rim, James saw a place where rocks had crumbled, leaving a slope which might be climbed.

Chuck loped along beside him. James was fit, having trained for this mission by running marathons, but Chuck had a knack of walking with long, easy strides without expending much energy. They soon reached the landslip and found it consisted of a mixture of rocks and sandy soil. After a few minutes, they found a way to clamber up and James emerged at the top of the crater rim.

"Keep your head down," said Chuck, an urgent note in his voice.

Looking round James saw, not far away, a large spacecraft and a smaller rover. Close by sat a number of figures, which appeared to be human. He slid back down the sand until he was close to Chuck and hidden from the view of anybody in the plain.

"Never trust briefing," said Chuck, holding out his hand for the binoculars. He swore. "Must have seen us, heading our way." He drew his pistol.

James shook his head. "There must be at least a dozen of them. We'd better try talking."

Chuck hesitated for several moments before returning his pistol to its holster. "Better go to them. Don't want to be at the top of a slope"

James and Chuck eased their way over the rim of the crater and began to cross a plain strewn with boulders and small impact craters. The men from the spacecraft walked towards them, dressed in dark trousers and tops, instead of the regulation white space suits James and Chuck wore.

As the two parties drew close, James made the universal gesture of peace – hands open, palms out. The man who appeared to be the leader of the group stopped a few feet away. He was tall, with a beard and rough brown hair and carried a kind of laser gun slung on his back.

"Who are you and what are you doing here?" He spoke the Common Tongue but with a strange accent.

"We're from the Space Survey Center. We've been sent to carry out a scientific survey of this planet." said James, with pride.

James looked at Chuck, who shrugged. As compliance was the obvious option, they followed Shay towards the spacecraft, escorted by the other Scavengers.

James looked at the lines of men – five to his right and five on Chuck's left. The formation made him uneasy. Perhaps he ought to work out a plan of escape in case the Scavengers turned nasty.

They soon reached a ring of rocks that appeared to be a make-shift campsite. Two Scavengers sat beside a metal cooking pot, one feeding a fire with paper and food waste, while the other stirred some kind of stew. An enticing smell rose from the pot.

"Sit down," said Shay, gesturing towards the camp fire. "There's plenty to eat."

James sat with his back to a rock and looked at the Scavengers taking their places in a ragged ring around him. They were not part of a regular force. Some wore jackets and trousers of a kind of plastic, others clothes of rough fibre, and they carried an assortment of weapons, from laser guns to old-fashioned rifles. Some were dark skinned and dark haired, others much paler. Irregulars then. He didn't think they could be the dreaded slavers, as the planet wasn't officially inhabited. The spacecraft shone silver and, although he couldn't make out what material it was made of, it looked sleek and sophisticated. The rover was a robust vehicle, with big caterpillar tracks. These people were not uncivilised.

After a while, the two Scavengers who'd been cooking walked round the circle, with a pot of stew and a pile of metal bowls. James took a bowlful of fragrant stew, tasted cautiously, then ate the rest readily. He noticed that Chuck was doing the same. The Scavengers talked among themselves in a dialect James couldn't understand and no-one tried to involve him and Chuck in conversation. The bowls were followed by cups full of a clear liquid. James took a slip and, although it burned his throat, it was pleasant enough to persuade him to drink more.

At last, Shay spoke. "Haven't you heard of Scavengers?"

Laughter flickered round the group.

James gasped. "Time travellers? You've found how to do it?"

Shay nodded. "The scientists found out thirty years ago. But it's only in the last few years it's become normal."

"I wish I knew how," said James, full of excitement. If he could discover how to make time travel work, that would really make his name. Maybe these people would tell him. He drank another cupful of the spirit being brought round.

"What about scavenging?" asked Chuck, waving away the spirit.

"It started with a concern about environmental damage," said Shay and laughed. "People on earth got worried that planets and space itself were filling up with junk. So governments organised a squad that went round collecting up space junk and recycling it. At first it was official." He laughed again.

"Not for long," said Shay. "Some metals were getting scarce on earth and the Scavengers realised they could make money from space junk. We've even started going back in time to clear up after you lot. Europa was one of our jobs."

As James listened, Shay and Chuck exchanged yarns about planets visited and adventures in space. Other Scavengers joined in until there was a hum of conversation. James quaffed another cupful of spirit, relaxed against the rock behind him and thought he'd been wrong to suspect these Scavengers. They seemed hospitable enough.

He woke with a headache that felt as if his brain was about to explode and a swollen tongue. It took him a while to remember the fireside meal and the spirit, which must have been more potent than he realised. He was cold, damp and ached all over. Realising he must have slept by the Scavengers' camp, he stirred and struggled to his feet.

There was a cold, grey light over the surface of the planet. With a jolt, James realised he was alone. The Scavengers had cleared their camp and their spacecraft had disappeared. He walked round the circle of rocks, the only evidence of their presence and found no sign of Chuck, despite searching everywhere and calling his name in a frantic mixture of fear and confusion.

James sat by a rock and rubbed his head in an attempt to clear his thoughts. There were two possibilities. Either the Scavengers had taken Chuck prisoner and, if so, what had they done with him? Although James hadn't always got on with his colleague, he was horrified at the idea of Chuck being ill-treated – enslaved, tortured or killed. But, if the Scavengers wanted to take prisoners, why had they left him? He was ashamed of having drunk so much spirit that Chuck could have been taken away without him knowing. The other possibility was that Chuck had walked back to their own spacecraft and left him sleeping. That would have been mean but understandable.

Deciding the second possibility more likely, James set out to walk back to their spacecraft. As the morning began to warm, he reached the lip of the crater and looked down to their landing site. The spacecraft was not there. James hurried down the slope, slipping in the sand and tripping over rocks, hoping he was in some way mistaken. Although he knew the co-ordinates of their landing site by heart, perhaps there had been some mistake and the spacecraft was a little way away, so he walked round and round the crater, peering behind rocks and in gullies but without success. At last, he returned to the place the spacecraft should have been. There in the sand were a few screws and pieces of plastic. The truth sank in. During the night, while he slept, the Scavengers had taken his spacecraft to pieces and removed it.

James sank to the sand in despair. And what about Chuck? Had they carried him away in chains? It occurred to him Chuck had been a pragmatist. He could imagine Shay offering Chuck a choice – come with us and be a Scavenger or stay with your colleague and face a slow death on a deserted planet. Chuck had chosen life.