MVP takes us on her First Footing in Grenada 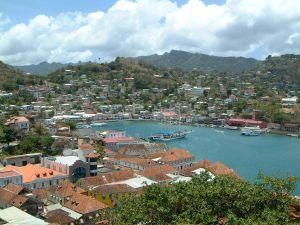 I would probably never have taken a holiday on a Caribbean island, if it hadn’t been for my brother. He worked at St George’s University in Grenada and, in 2001, invited me to visit him. I arrived on an island that looks like paradise - rising from a palm-fringed coastline to mountains clothed in rainforest. My brother lived on a rocky point on the south east of the island. His house was one-storey, with a roof that overhung the small swimming pool and the terrace, creating as much living space outside as inside. I enjoyed sitting by the pool watching hummingbirds and looking at flowers which included frangipani and bougainvillea.

One of the first places we visited was the capital, St George’s. We drove down roads which were well-made in some places and full of pot-holes in others. The town is a jumble of red-roofed buildings round a superb blue harbour, where there was often a big cruise ship, which dwarfed the buildings. We strolled along the broad Carenage that sweeps round the harbour, looking at boats and watching fish. Women offered us packets of spices for sale and men urged us to use their taxis.

Behind the Carenage we found the National Museum, which had a small display about the natural history of Grenada. It also had artefacts dating back to the first inhabitants, the Arawaks and the Caribs. The Caribs were a warlike people, who resisted the French colonists and, according to legend, threw themselves off a cliff rather than surrender. The museum also had exhibits on the more recent history of the island, including the slave trade and the sugar plantations.

We climbed the hill behind the Carenage and came to the market. From a square of wooden shacks and stalls, men and women sold leather sandals and brightly coloured shirts, coconuts, bananas and other fruit. Everwhere we saw and smelled spices, particularly nutmeg, which was one of the main products of the island. The stall holders put up parasols to protect them from the midday heat. In the middle of the square, the reggae buses assembled, filling up with passengers.

Sometimes we caught reggae buses, though we had to wait for one that had a few remaining seats. I once found myself squeezed next to a woman carrying a bag full of small red fruit I didn’t recognise. The bus bumped along, steering an erratic course to avoid the potholes, and filling the air with the beat of loud reggae music. Some of the buses went to Grand Anse, which has one the best beaches on the island and some of the best hotels.

Grand Anse beach is a long sweep of white sand, lapped by a calm azure sea. As we made our way onto the sand, vendors came up, trying to persuade us to buy carved pendants and brightly coloured beach wraps. At midday, with the sun reflected off the white sand, the beach is scorchingly hot and we were glad to retreat to the shade of a bar and drink Carib beer.

We preferred the beach at La Sagesse, a nature centre in the south east of the island. Here, the beaches are of dark volcanic sand, fringed with coconut palms. We sat at the café drinking fruit punches, while our son tried kayaking in the bay. From La Sagesse, we walked past mangrove swamps to a more secluded beach.

The south of the island is fringed with hilly peninsulars, flanking inlets which provide safe berths for a variety of yachts. My brother took us out in his sailing boat to the east of the island, where the Atlantic rolls in, making for exciting sailing. I think we preferred taking the Osprey, a fast catamaran, from St George’s to the nearby islands of Carriacou and Petit Martinique. We were lucky enough to see flying fish and dolphins from the boat. From Petit Martinique, we asked a boatman to take us on to the tiny island of Petit St Vincent. 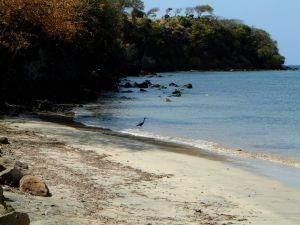 We also took a trip to a nature reserve at Grand Etang, a water filled crater in the volcanic mountains that form the backbone of Grenada. As the road rises, it passes through increasingly lush vegetation, including cocoa trees and giant ferns. We walked to the Seven Sisters waterfalls, past giant bamboo canes and trees covered with epiphytic plants. A mountain stream falls over rocks covered with ferns into two pools.

The lush vegetation of the centre of the island contrasts strikingly with the cacti and scrub that characterises some of the dryer coastal fringes. For a small island, Grenada is remarkably varied and it has a great deal to offer anyone who likes sailing or other water sports, and anyone who is interested in natural history.