Another delightful First Footing story. Who knew we had internationally wanted characters in our midst? 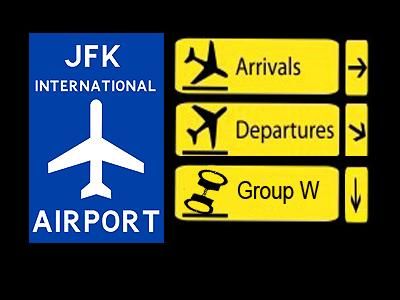 In 1965 a certain Mr Arlo Guthrie found himself sitting on the ‘Group W Bench' in New York City‘s induction centre, 39 Whitehall Street, the story is the punch line to his song Alice's Restaurant Massacree . (If you've never heard it, shame on you, if you have, I bet that song's in your head for days now!)

I've always found that piece of Arlo's story hilarious, over the top but at the same time a fascinating insight into the mindset of American Officials during the Vietnam protests.

Jump forward to a new millennium and a holiday to the U.S that had been in the planning for several years. The intention was to visit Miami, drive up and have a few weeks in Orlando before a week further north near Clearwater to recover from Disney overdose and see some small town America. That was the plan, anyway, until we landed for a stop-over in New York, New York. My wife had been to the Big Apple before, but this was to be my first time.

I've already touched on the problems with the flight in my Journal, so won't bore you with the details, but needless to say, by the time we hit US Immigration and security we were all a little frazzled and tempers were beginning to fray!

My recently teenaged daughter had fallen hopelessly in ‘like' several months before we landed, and had made it quite clear that she would rather be left at home to spend her time texting her boyfriend (I can't even recall his name now) and holding hands, etc, than accompanying her family on the holiday of a lifetime. As we waited in the enormous queue, she decided to throw a particularly verbose tantrum when she realized she couldn't get reception on her mobile phone. She wanted to go home, be with her new love, hated America, the whole world and particularly me; I had in effect kidnapped her by forcing her to come with us against her will!

This last remark raised the eyebrows of the hulk of a man sitting behind the fingerprint machine. Hopes of an end to his obvious boredom lit up his meaty face as he stood up, which, considering his size, took quite a while, and approached the argument.

'Is there a problem here, Miss?' Officer Meathead snarled down at me, right hand moving in a well-rehearsed flickering motion towards the firearm at his bulging waistline.

'No problem, just an upset teenage daughter.' I tried a smile but was met with more finger flicking.

'I was talking to the young lady, sir.' How anyone can make 'sir' sound like the worst insult in the world was a truly amazing thing. This guy obviously practiced his sneers and finger flicking for hours at home, I was impressed.

My lovely daughter decided to unleash the hormones and blasted Officer Meathead with the full star-crossed lovers separated against their wishes by a cruel world sob story.

'So, you're saying that this' – a downwards snarly menacing glance (the man's repertoire was seemingly endless) – 'gentleman' has taken you from the UK against your will?'

'Oh Jesus, don't!' my mind screamed as I tried to throw a pleading look at Little Miss Hormone 2002.

Time slowed, as she smiled sweetly up at the hulk and beamed, 'I just wanted to stay at home but he made me come, practically dragged me onto the plane!'

Meaty fingers closed on the handgrip of gun. My stomach churned, and I was asked very politely to accompany the Officer. The eyes-flicked-down-toward-the-holster look was a masterpiece. The rest of my family had passed through the gates by now, and I frantically mimed over the barriers, trying to convey the correct charade moves for ‘don't panic, misunderstanding, going with meathead, sort it out soon, my daughter's just had me arrested!'

We passed through several Authorised Personnel Only doors and ended up in a large room, benches against a slime green wall facing a huge desk behind which more meatheads glared up occasionally with more well practiced 'you're in it deep now, boy' looks.

I found myself sitting next to a very small and very distraught Mexican gentleman. I can speak enough Spanish to get by, and we started a muted conversation. It seemed he had travelled to New York with his nephew and had become separated. His nephew had all his travel documents and he didn't speak any English, and had been promptly despatched to the Group W bench as a suspected alien. If they would only find his nephew, everything would be ok, but it had been a long time now, and he feared he was in trouble. 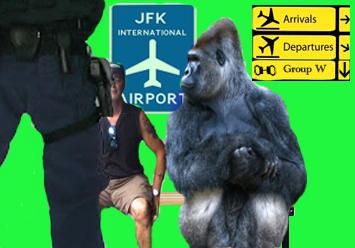 I waited for a gap in the excellent threatening glance work of the Officials and timidly approached the desk. I found myself a likely meathead with a Spanish-sounding nametag and enquired if the gentleman's nephew could be paged over the airport's public address. Multilingual threatening glances were obviously this guy's forte, as he calmly told me a 'Mexican-speaking interpreter' had been summonsed for this detainee and would I kindly retake my seat on the bench and stop interfering with United States Officials? I couldn't see Officer Ramirez's hand over the desk, but presumed his fingers were dancing over his holster at that point.

Eventually I was beckoned towards the desk for my turn. Purpose of visit, full name, date of birth, place of residence whilst in the country? AH, Erm...my wife had all the travel documents. All I knew was we were staying in a Miami hotel and had places booked in Orlando and Weekiwachiee Springs, Florida. This did not go down well. More snarls and raised eyebrows. Questions about my authority to bring a minor into the United States came next. Having verified my parental lineage, the meatheads then produced their trump question, presumably taught at Meathead College to instil fear into the hearts of UK citizens....

'Is it of Irish origin?' a knowing snarl and a slight I-know-what's-coming leer.

'Ok, now I'm in the IRA, just because I have a tantrum-throwing teenager?'

'I don't like your attitude, son, please answer the question.' He stood just enough to show me flickering had ceased and gun was now in reach, he treated me with an especially practiced nasty head tilt.

I was gobsmacked. This guy had actually called me ‘son'. What was next ‘kid'? Thoughts of Alice's Restaurant circled my head as I fought between anger and amusement...amusement won. I decided to play the game.

'Yes, Officer, I am indeed of Irish descent. If you check my fingerprints, you will find my details are registered with Interpol, and I would like to speak to your supervisor and the British Consul before answering any more questions.'

I sat down with the other undesirables and chuckled to myself as the paperwork flew and computer keyboards were battered with meaty fingertips, searching for the international incident of the year and a gold star for the meatheads who had brought this despicable Limey to justice.

Before you gasp with disgust and moral indignation, let me clarify. In the late eighties, I worked on nuclear submarines in a shipyard and part of the Official Secrets Act at the time was a full security check,
fingerprints etc, so I knew somewhere in the bowels of officialdom I would be on record as boring old me, Servant of the Crown, two points on my motorcycle licence and a 12 quid fine for no L Plates when I was 16!

The resulting flurry of excited activity around the Group W bench was worth the wait. Sweat streamed down meaty faces, I was even given the honour of having two of them stand in front of me, best hard stares pinning me to the bench, presumably in case I tried to escape and they had a chance to use their flickering trigger fingers for real!
When the sad truth became apparent, the vast grey cloud of boredom and disappointment descended again over the desk and I was snarled a welcome to the United States and allowed to resume my terrific holiday. Poor old Mexican gentleman was re-united with his family, and also given a snarled welcome (in English).

So my first time as an Englishman in New York was quite eventful for me.
I love America and have revisited several times, but think I'll avoid New York, especially as my youngest is just about to hit Hormone Hell!