A couple of weeks ago, the Post issued a challenge: tell us about a local legend. Freewayriding says: 'Here's an urban myth that maybe suitable considering Hallowe'ens nearly with us."

Heard this one many a time in the motorbike circles around the Northwest of England.. Never met her myself though! 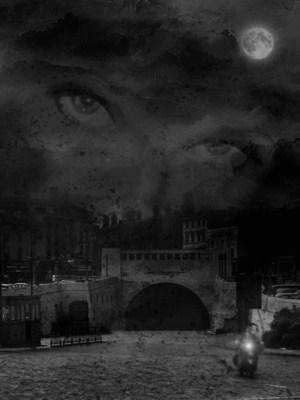 The cold February rain had literally washed out one of the busiest nights of the year in Liverpool city centre. London Road was virtually empty, the odd couple braving the weather for a quick Valentine's Day drink before the pubs closed.

The tarmac glistened with a kaleidoscope of rain and diesel as he brought the Kawasaki to a gentle stop at the traffic lights, lifting his soaking gloves to wipe ineffectually at his visor. He didn't see the girl until she was at his side, her blonde hair plastered to a very pretty face. She wore bike leathers and carried a crash helmet. She smiled a dazzling smile and asked if he was going towards the Tunnel and explained that her lift had let her down after a shift at the nearby hospital.

Luckily he was on the way home to Chester and would be happy to give her a ride through the tunnel. She climbed aboard and settled into the seat with the ease of one who was no stranger to riding pillion.

Her arms encircled his waist as the bike moved off; he could feel her trembling slightly as the cold rain battered the bike. Once in the tunnel they could have a brief shouted conversation and he discovered she lived not far off his way home. He readily agreed to drop her off, enjoying her company on an otherwise miserable night.

Twenty minutes later they arrived at her house on the outskirts of Rock Ferry. She swung herself off the bike and they chatted for a while. She really was a stunner and he asked if she fancied going to a party the following evening. Her smile once again dazzled him as she agreed and with a quick peck on his cheek through his open helmet she turned to walk away. "I'm Jenny. by the way," she shouted over her shoulder, "Pick me up here at eight?"

He nodded over the noise as the engine started and smiled back but she had already disappeared out of the rain.

The following day dragged for him as he counted the hours until he could see her again. He arrived at the house a little early and stood, slightly self-conscious, feeling like a giddy schoolboy as he waited for her. They'd only met briefly, but he couldn't wait to see her.

The elderly lady opened the door of the terraced house and greeted him with a shocked look when she saw his motorbike gear.

"Hi, I'm here to pick up your daughter Jenny, we're off to a party", he introduced himself smiling shyly.

"Oh dear, son, I don't know how to say this, it never gets any easier, even after all these years. I'm not Jenny's mum, I was her sister", she choked back tears as she continued "Jenny died in a car crash on Valentine's night, oh, it must be 35 years this year".

His smile faded as he realized she was deadly serious.

"She was supposed to share a lift on her friend's bike, but he had to work late and a drunk driver hit her while she was crossing the lights at London Road, trying to get home. I'm so sorry, I never get used to this but thank you for getting her here safely last night. You're just 35 years too late."

With that she smiled sadly and closed the door.