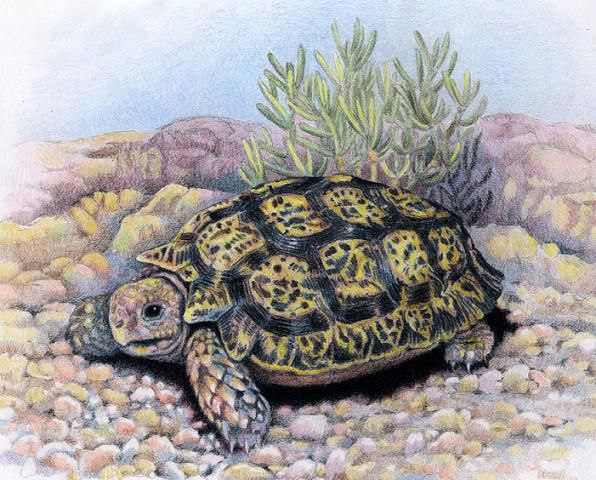 This is a drawing of a Speckled Padloper, Homopus signatus, the world's smallest tortoise! 'Padloper' means 'path walker' in Afrikaans. It’s not that distinctive a name since, like all other tortoises, this one walks, rather than running, skipping hopping or leaping around! The 'speckled' part also doesn’t say much, as many other local tortoises have speckled markings. In practice this species can be recognized by its size: adults reach at most 10 cm/4" in carapace length. Also, this species is fairly flat, with the 'cusps' of the carapace flattened or even indented. In the male, the belly is concave (=hollow) as well. Its carapace is longer than it is wide. In weight, the speckled padloper ranges from 95-165 grams/3.4-5.8 oz. Females are larger than males, because of having to accommodate their large eggs in their bodies.


This species has a restricted distribution, only occurring in the dry southwestern regions of South Africa. These regions receive winter rainfall and the natural vegetation is called 'Succulent Karoo'. This consists of small succulent plants, overwhelmingly comprised of leaf succulents of the Vygie or Mesemb family (a small plant of one of these grows behind the tortoise in the picture). These plants store water in the succulent leaves; munching these leaves therefore supplies the tortoise not just with food but also with adequate water. Padlopers will also chew the non-succulent but still moisture-rich leaves of seasonal plants like Oxalis.


There are two subspecies of this tortoise. North of the Olifants River (the one in the Cape – there's a different Olifants River in Limpopo province as well) the Namaqualand Speckled Padloper occurs, which has a brown basic colour with quite bold black speckles, rays and blotches. This is the one I drew here. South of the Olifants River the Southern Speckled Padloper, Homopus signatus cafer, occurs. This one can be light brown, salmon pink or orange-red in base colour, with much finer speckling.

Like most Padlopers this species just lays a single egg per clutch. This is in marked contrast to other tortoises and turtles which lay clutches containing sometimes a great many eggs. For the padloper this is an adaptation to its desert habitat where resources are scarce and thus it would be difficult for the females to lay many eggs, and the baby tortoises also would have difficulty finding food. So, the female forms just a single comparatively large egg, and the single baby tortoise is fairly large and thus has a comparative head start in life. But this means that under natural conditions these tortoises reproduce very slowly.


But when kept by humans and fed well, speckled padloper females can produce four clutches, that is to say four eggs, per year. This is good news, because this little tortoise might need human assistance in the future, in case the climate of its natural habitat changes. There's a chance that with global warming the southwestern Cape might become more arid, with good rains coming much less frequently. This may mean that females can need thirty years or more, instead of around ten, to mature, and will be able to lay eggs only every several years. So not only might we need to breed them in captivity to boost their numbers, we might also need to establish new populations in regions of more suitable climate. Apart from climate change this species is also harmed by habitat destruction and degradation – such as overgrazing by goats – and some tortoises also get run over by cars while crossing roads.

This tortoise is able to grow negatively – that is to say adult tortoises can actually shrink in all their dimensions! They can resorb bone and their shells are somewhat flexible and can thus contract, becoming smaller to house the tortoise's smaller body. This is, again, an adaptation to harsh desert-y climates. In some years hardly any rain falls at all, and there might be virtually no food available. In such years tortoises can feed on their own body tissues and shrink – but they still survive! Then, in years of abundant rainfall, they eat as much as possible and regain their lost growth. Like all other tortoises their slow way of life is one for which little energy is needed, and they therefore don't need to eat much or often at any rate. Tortoises are therefore some of the creatures best adapted for desert climates.


The five species of padlopers, comprising the genus Homopus, are all restricted to Southern Africa – the countries of South Africa and Namibia. All of them are small and slow-breeding. Since they are pretty little tortoises some people keep them as pets. This is not very good since tortoises end up being removed from nature to supply the pet trade. Some of them have very specific food needs, but the speckled padloper and the Common or Parrot-Beaked Padloper adapt well to captivity. But until their numbers in the wild are secure and the entire demand can be satisfied by captive-bred specimens it would be best to leave them out of the trade.