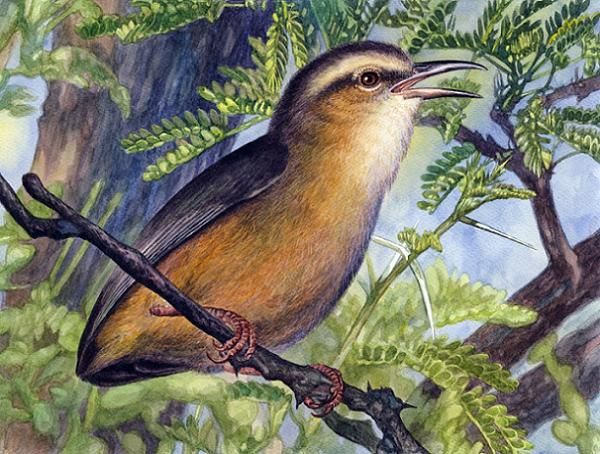 This is a several-times-life-size watercolour painting (the original is about A3 in size) of a Longbilled Crombec, Sylvietta rufescens. The scientific name more or less means ‘reddish little-one of the forest’, and is apt, since this is a tiny reddish-brown bird of the African woodlands, savannahs and light forests. The crombec genus includes about nine or ten species that live in a diversity of habitats from rainforest to desert scrub.

What about the common name? 'Crombec' very much sounds like 'krombek' which in Afrikaans means 'curved bill' – which again is fitting as it has a slightly curved bill! The name 'longbilled' also indicates that among the crombecs it is one with a long bill; indeed, most crombecs have short bills. Actually the length of its bill somewhat varies from region to region and between individuals, but generally is longer than that of other crombec species. In French the word 'bec' also means 'beak' and it has the strangely poetic name 'crombec à long bec'. But in Afrikaans its name doesn't refer to its beak at all! It is called a 'bosveldstompstert' or 'bushveld blunt-tail' … which is indeed also a fitting name since perhaps even more than the long bill, what strikes you on first seeing this little birdie is that it appears to have no tail! Actually its tail is there, but very short … the tips of the folded wings extend right over it. Together with the long bill this makes this bird appear rather top-heavy!

This is not at all a rare species in South Africa, but is perhaps not nearly as well known as it should be. It is very small, not boldly coloured, and also doesn't make itself conspicuous as it goes about its daily business. Most of the time it will be relaxedly working its way along twigs and branches. It is in many ways similar to the nuthatches of Europe, America and Asia (the group does not occur in sub-Saharan Africa). It will hop and creep along using its strong legs, methodically probing into the bark with its long bill after tasty insects or spiders. It will also glean insects off tree leaves.


Actually if you are aware in the right way, you will have little difficulty locating this species. Most people are very ignorant when it comes to bird calls ... this one has a most characteristic contact call, a soft somewhat metallic trill, 'brrrrrt'. This indicates a foraging crombec. A crombec will sometimes interrupt its foraging for a song, perched on the tip of a twig. This is a repeated rich, chirpy whistle, which (as with the Blackeyed Bulbul) cannot really be rendered in English, but goes somewhat like 'wreee-wree-oo, wreee-wree-oo' repeated several times, the 'wree's being higher pitched than the 'oo'. Both the contact call and the song of the longbilled crombec are for me definitive elements of the bush experience.

In my region, longbilled crombecs spend most of their time investigating thorny shrubs and trees like the Umbrella Thorn. Mine is portrayed perched in a thorn tree. They also occur in the shrubby fynbos vegetation of the western Cape. They can even be found in regions of open grassland, but there only among the trees and bushes lining the banks of rivers.

Crombecs make delightful nests! These are tightly woven from dried grass, plant fibers, and fluffy and downy fruits, all bound together with spiderwebs. On the outside the crombec will plaster leaves and patches of lichen to disguise the nest. The finished nest has a small entrance hole and resembles a small purse or slipper. The nest is usually also hidden in a pleasant, shady nook inside the shelter of fringing twigs and leaves. In this the female lays two or three speckled eggs.


Unfortunately, in spite of the sheltered position and the leafy disguise, the nests are still found often enough – by Klaas’ Cuckoos! These small, metallic-green cuckoos lay eggs that closely resemble those of the crombecs; typically the male cuckoo will try and distract the breeding pair while the female slips in and lays her eggs. There is now a kind of ‘race’ between the crombecs and the cuckoos; in some places the crombecs are hyper-sensitive to any cuckoos anywhere near their nests, so the cuckoos move to other areas where the crombecs are more naïve. As those crombecs catch on, the cuckoos will move yet again.


A Small Family of Small Birds

Crombecs used to be classified as warblers. Unfortunately the term ‘warbler’ has been used for any of a very vast number of different species of small singing birds; originally having been thrown together in a single family, the Sylviidae or warbler family, they are currently in a process of reclassification. Out of the entire assemblage it is quite possible that a number of different families will be recognized, several of them present in Africa.


So, genetic studies seem to indicate that Crombecs will belong to a small family that is confined to Africa, the Macrosphenidae. In this family, the crombecs are the largest group, the second-largest being the similar longbills. But a number of unusual species, each in a genus of its own, also apparently belong to it: the Grassbird, the Moustached Grass Warbler, the Victorin’s Scrub Warbler, and the very un-warbler-like Rockrunner. I personally find it very exciting, how new study is revealing the relationships of Africa’s birds to be much more complex than previously thought.