Dogs names are funny. TS Eliot may have written about the thought processes required during the Naming of Cats, but that's nothing when it comes to dogs! Anyone who's watched Crufts or a similar show will know that the Official names of dogs reflect many things, and often include a name or a theme which is passed from one generation to the next.

My first ever dog is Max, a Weimaraner. He was a pedigree, bought from a reputable breeder, and came with his full Kennel Club (KC) registration papers. All his litter was called "Silver.......". His official name is Silver Sovreign, and his brother, who used to live next door, was called Silver Smiles, a name our next door neighbour loathed. Neither dog was ever referred to by those names, though. Next door's was Trilby, and we called ours Maxim Von Thunder, or Max for short. Thunder is my husband's biking name, and Maxim was a sort of reference to my favourite composer, Shostakovich (Maxim is his conductor son).

When we adopted a little sister for Max, she came from a litter of Cocker Spaniels. Though they were pure bred, they didn't have the official KC papers, and as we had no intentions of showing our dogs, we didn't worry too much about that. We called her Minerva Von Thunder, or Mini for short, the synonyms for Big Dog and Little Dog. 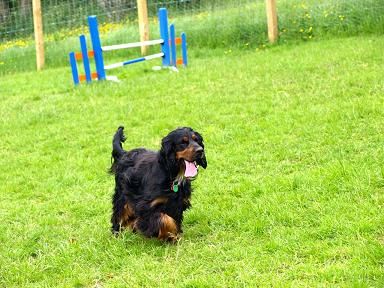 Mini had been doing pretty well at her obedience classes: she'd got her bronze and silver Good Citizen Dog awards, and was working towards her Gold. She'd also shown an aptitude for agility style work. So when our Dog Whisperer trainer asked the gold class all to take part in a show, I was intrigued. It was a special pre-beginners stakes, perfect as an introduction to the world of obedience and agility. The only snag was - all dogs had to be KC registered. I explained Mini's lack of papers to the Dog Whisperer, and he was able to tell me that you CAN register with the Kennel Club, selecting categories under obedience and agility, rather than conformity breed-showing. So, as it was Mini's 2nd birthday at the start of August, I thought this would be a suitable present. I duly filled in the forms, wrote a cheque for £15 and sent it off to the Kennel Club. 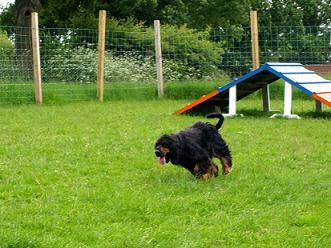 When the papers arrived I eagerly tore open the envelope, and was shocked by what I'd found. They'd spelled her name MINERUA. Now, I know that a hand-written V looks very like U. And I know that some dogs get wierd and wonderful made-up names. But really?

The day of the dog-show arrived. I'd also signed up for a Colour Run which was taking place that morning, and had left it till the last minute before deciding which event I was going to. Mini was in good form, we'd done plenty of work on the exercises I knew she'd be required to do, including "playing with a toy". Remarkably, Mini has always struggled with this. Even though she's supposed to be a retrieving gun dog, she doesn't play fetch much, or even like carrying things in her mouth. Consequently I'd worked hard with her on this, using the Dog Whisperer's advice to tap a dog on the shoulder to encourage them to play tug fighting. And we'd had a lot of fun all week playing with a blue Kong-with-flappy-tails which squeaked when pressed.

Mini skipped into her spot in the back of my little car, and we et off out into the countryside. I found the church hall in the hills above Lisburn, and went inside to register. I pulled my randomly assigned number out of the box, and was number 16. Five of our gold class were there, and 21 dogs in total had entered. We'd all have to hang around until the very end to do the 1-minute stay in small groups, but other than that, each dog would go into the hall singly to be tested. A quick calculation at an average of 5 minutes per dog, it would be 11a.m before it was our turn, and 1p.m before we would get away. I started regretting my choice, and wished I'd done the Colour Run instead.

It was good to get a chance to talk to the other owners. During our weekly one-hour class there's not much time for chit-chat, so sitting down with my class-mates over a cup of tea and a bacon butty, and hearing more about how, where, and when they got their dogs passed the time very pleasantly. Two of them discovered that their pooches attend the same doggy day-care facility!

In the grounds around the hall, I did a bit more tuggy practice with Mini, and she was becoming proficient at chasing the blue kong in a figure-of-8 around my legs. When it was our turn, I was optimistic that it wouldn't be too much of an ordeal. No food is allowed in the hall, so I left my bag of home-made liver cake on the windowsill of the entrance vestibule, took a deep breath, and went into the hall.

It felt rather strange to be in such a quiet and empty space. There was someone checking the registration details, one judge giving the commands, and another making notes and awarding the points. One row of seats at the back of the hall held half a dozen spectators having sotto voce discussions about the dog in the ring.

First exercise was Play With Your Dog. I produced the blue kong, keeping my voice bright and excited, and tried to get Mini's attention. Alas, the new environment, full of interesting smells left by previous visitors, made this a very difficult task, and even though the judges were encouraging and suggesting different things to try, it wasn't a great exercise for us.

Next, Walking Nicely On a Lead. This is never a good one for us, and while Mini wasn't straining too much, she wasn't really giving me her full attention. But that was as I expected. 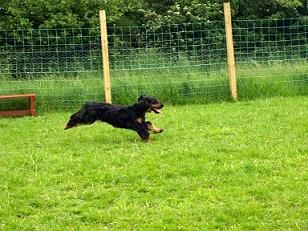 Straight recall. Put the dog in a sit, tell it to wait, while you turn and walk to the far end of the hall. When the judge tells you, call your dog. Up to this point we were fine, but instead of "presenting" by sitting straight in front of me, Mini ran past me for a bit, and it took a short while to get her to come and sit sort-of in front of me. The finish command then brings the dog back to your side, and she was OK on that part. So, while it was not perfect, it was not a total disaster either.

The last part of the solo session was Examine Your Dog. Check ears, eyes, paws, along the body, under the tail etc without the dog objecting. We had no problems in this exercise.

With a sigh of relief that the hard bit was over, I rejoined my class mates and the other handlers ouside to compare notes. I'd watched a few of the other dogs in the ring, and none of them were getting everything perfect, so I didn't feel we'd disgraced ourselves or let down our Dog Whisperer, who was organising agility demos in the field beside the hall. We also chatted to the other groups of handlers - I met someone I used to work with, and the owner of a large Rottweiler called Brenda was getting on well with our group. When it came to the group stays, the Dog Whisperer asked us to form clusters of five or six, and strongly hinted that our class should go as one group, since all the dogs know each other and would be less likely to be distracted. However, Brenda was determined to come in with us, despite the Dog Whisperer's increasingly obvious requests that she should go join a different group. The half a dozen dogs lined up against the side wall, we put them into a Down, gave the command to Stay, and all the handlers walked to the other side of the hall. The judges started the stopwatch. After only 5 seconds, Poppy the labrador broke her stay, which was a real shame, as she'd done very well in the other exercises. Maggie the Doberman was a little whiney, but amazingly Mini didn't whinge, and stayed still for the full 1 minute. 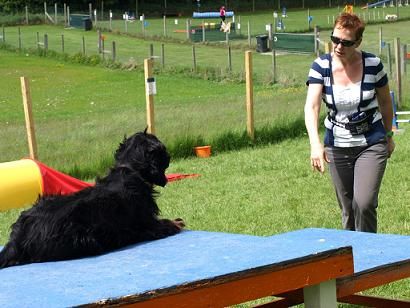 We all grouped outside again while the judges totted up their marks. There were rosettes down to 10th place, so I thought we might stand a chance. The Dog Whisperer re-emerged from the hall, and said that there was a tie for one of the places, so Maggie and another dog had to do their recall once more. The other dog went in first, and the Dog Whisperer suggested to Maggie's owner that he should do a bit of last minute practice on the "present and finish" part. Her handler had used all his food, so I once again produced my popular liver-cake and gave him some of that.

All 21 dogs were called back into the hall, lined up along the 2 sides. I knew we wouldn't be getting any of the top rosettes, and I was really pleased for my classmates Clooney, the adorable black toy poodle, and Maggie, who got 7th and 9th places. But sadly, no rosettes for us.

So now I'm indulging in my terribly bad habit of over-analysing retrospectively. If I'd worked harder on her recall so that it had been perfect, would that have made a difference? If she'd played with her kong like I know she can, would that have helped? Should I just abandon any future show-type activities? Do I still bother going to our weekly class? Is it even worth getting her name spelled right on the KC papers? Should I have gone to the Colour Run instead?

Shoulda woulda coulda. The path not chosen always haunts us.

Take it to the Max Archive