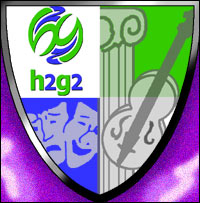 Articles In The Project:

As the author I plan to make a copy of the entire project for their own safe-keeping. This is because it is the project pages themselves that are subbed (not copies, as is the case for Edited Entries), so in the unlikely event of the Sub accidentally deleting a page, I have a back-up.

The Story Behind The Article

This started life as a Flea Market Rescue of hatameiwaku's article The Island Of Dr. Moreau, I didn’t read that part, about the 1996 film adaptation. This is a film my wife bought on VHS. When looking in the library to see whether they had a copy of the novel, so I could compare the film to the original, I discovered that they had both earlier adaptations on VHS, as well as the director's cut of the 1996 film. So it seemed to make sense to write about all three versions.

The 1932 film is quite good, the 1977 is okay, not bad, not brilliant, not particularly memorable. The 1996 film is definitely in the 'so unbelievably bad it really is quite fascinating' category.

If anyone is interested, the reason I go on about legendary make-up artist Wally Westmore so much, it is because I have reason to believe that my great-great-aunt married his father's cousin. A fairly tenuous and insignificant claim to fame, true, but it's the only one I've got!