And then, just as Nellie was counting "Ninety-seven," she sank down in a heap, with her eyes closed and her face as white as a sheet.

For a moment the other girls looked on in blank wonder, not knowing what to make of it. Then Nan gave a scream.

"Perhaps she is dead!" burst out Nellie Parks. "And if she is, we killed her, for we turned the rope!"

Stephen King no doubt quaked in his boots while reading The Bobbsey Twins. Have you ever read anything scarier? Actually, the scariest thing about that book was that in 1904, medical people were telling little girls that too much jump-rope skipping was hazardous to their health. Oh, brother.

Sooner or later, unless you write very boring stuff, somebody's going to be scared of something. And you're going to want the reader to be scared, too. How do you get that necessary frisson out of your copy?

You know what a frisson is, don't you? It's what that old guy with the white beard keeps claiming to feel on Deep South Paranormal, just before he shakes his gris-gris stick at the bogeys in the haunted house. If you don't find Deep South Paranormal atmospheric, either you've never been that far down the Mississippi River, or you have ice water in your veins. I suspect George Romero would enjoy that supernatural reality series.

But back to scaring the reader. Try this on for size:

Well, I went fooling along in the deep woods till I judged I warn't far from the foot of the island… I clipped along, and all of a sudden I bounded right on to the ashes of a camp fire that was still smoking.

My heart jumped up amongst my lungs. I never waited for to look further, but uncocked my gun and went sneaking back on my tiptoes as fast as ever I could. Every now and then I stopped a second amongst the thick leaves and listened, but my breath come so hard I couldn't hear nothing else. I slunk along another piece further, then listened again; and so on, and so on. If I see a stump, I took it for a man; if I trod on a stick and broke it, it made me feel like a person had cut one of my breaths in two and I only got half, and the short half, too.   – Mark Twain, Huckleberry Finn.

See how a real writer does it?

See, Huck has found a smoking campfire. He's not alone on that island in the Mississippi, and he thought he was, except for some bunny rabbits and a snake he was chasing. He's scared, because he doesn't want to be found. He has urgent reasons for this.

What does he do?

What does he perceive?

By telling us all this, Twain not only convinces us that Huck is afraid – and possibly needs to be – but he makes us feel a sort of contact-anxiety. We are so relieved when Huck finds out who the campfire belongs to – his friend Jim – that we probably let out a sigh.

This is good. This is what you want. Not, ' Then Nan gave a scream.' What kind of tension is that? No wonder we're laughing. The funny thing is, there's not much difference in age between Huck and Nan, and only a few decades of writing history. The difference is in the writing style.

Write What You Know

You have been afraid. You know you have. Of what? That's your affair. Maybe you were afraid of the bogeyman in your closet as a child. Maybe you were/are afraid of heights. Me, I have an unnatural love of heights. I can't be restrained from climbing the clock tower. On the other hand, I have a totally unreasoning, paralysing fear of cicadas. I'm not lying. There was a cicada shell floating in the pool this morning. Elektra was kind and removed it. In return, I don't try to make her cross hanging bridges with me any more. This is a fair arrangement.

Whatever scares you, imagine it. Wait! First, get a glass of water to put by the chair. Use auto-hypnosis. If necessary, have a friend or family member within call. Tell yourself, 'This is only for research purposes.' Now go to the place where the terror lives.

Now, come back from your frightening journey, oh brave traveller. Now you know how to write that fear. Better yet, you have an approach to use when writing any fear: don't skip the process. Tell what the character does. Describe the symptomology. And don't feel that the character has to take action. Very often, we don't. We wait to be rescued.

Is this important for factual writing? You bet it is. What makes Guide Entries boring is the lack of engagement with the reader on a human level. Of course, you don't want to make up emotions for historical persons to feel. That's dishonest. But you can do the research:

See? You don't have to tell any lies to show empathy. You don't have to write like some overblown Sob Sister of the 1920s in order to get your reader engaged. But stop and think about it. Which would you rather read:

When the shark attacked, he was pretty scared.

The first moments in the water were sheer terror: the churning of the white waves mingled with the shocking red of blood –   his blood, he suddenly realised, the rushing sound in his ears as he sank and rose again, gulping desperately for air…the disorientation of wondering exactly where the massive, jagged-toothed beast was at this moment, and when it might strike again…

Okay, 'nuff said. Go scare the living daylights out of some readers. After all, they have nothing to fear but fear itself. 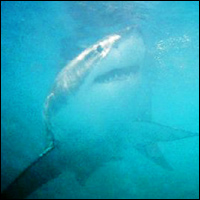