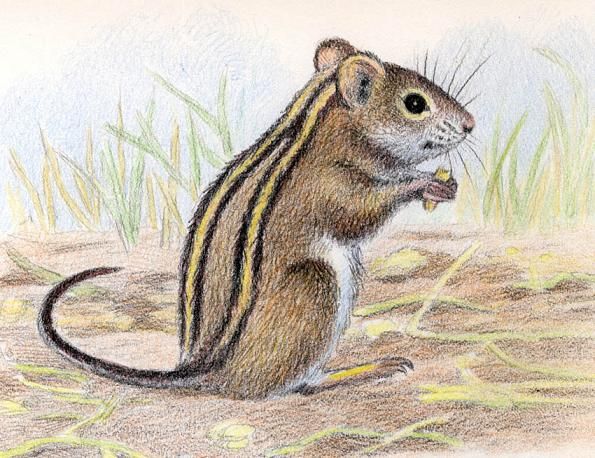 This little mousie is the mousie that occurs in my own part of the world: the Four-Striped Grass Mouse, Rhabdomys pumilio. The scientific name means 'little barred mouse'. We call it a field mouse. It does also enter gardens, but only rarely homes. If it does enter a home it is best to take it out and release it. It does little damage in the garden.


Traditionally the four-striped grass mouse is regarded as being just a single species, also constituting a genus of its own. But contemporary investigations are suggesting that we might here have another one of those species-complexes: a diversity of similar forms that nevertheless are separate from each other, geographically and genetically. But for now we can still regard them as comprising a kind of 'unit'. Four-striped grass mice are quite distinct – no other African mice have those four dark stripes down the back with the light creamy panels in between them. There are other stripey mice in Africa, but they have more numerous white and/or black stripes – or just one, in the case of the Single-striped Grass Mouse, Lemniscomys rosalia.


This grass mouse occurs in most of South Africa and northward to Angola, Zimbabwe, Malawi, Tanzania and a bit of Kenya and Uganda. Its habitat is pretty much any area with grass, such as savannah, open grassland, semi-desert, and woodland with grass in the understory. In the more equatorial parts of Africa it is associated with the cooler upland and montane grasslands. Especially in these discontinuous parts of its distribution it is very likely that there are significant genetic differences between different populations, although they all might look very similar.


An interesting study that is being done is the investigation of the lice that infest these poor mice. What happens with many mammals is that a particular species has a particular parasite, and the parasites evolve along with them. But apparently lice evolve faster than mice. So, when a population of mice gets separated from others, the mice as well as the lice start evolving and becoming different – but because the lice evolve faster, the differences between them are more easily visible. So the lice are like 'magnifying glasses' for spotting diversification trends in the mice. They can be used in a way to map the evolutionary history of populations of mice. Two populations of mice might look similar, but if their lice are different it means they've been evolving separately for a while, and the lice can even be used to see for how long they've been separated, and lice will also show which populations are most closely related, and give an indication of how the mice spread over the continent and populated different habitats in the past. Not only that, but a study like this also is relevant to other species: environmental barriers that separate genetically distinct populations of mice might also separate populations of other species, and so we might be able to better pinpoint distinct geographic regions with distinct biodiversity.

These mice are probably the ones most frequently seen in my region as well as many others. The reason for this is not only that they adapt well to garden and town areas, but also that, unlike most other mice, they are active during the day. The times of peak activity for them is in the morning and in the late afternoon. They hide and rest in their burrows during the hottest parts of the day, and also during the night. I see them a lot, often on lawns, looking for all sorts of tidbits. They are not very shy, they will allow you to get fairly close before scurrying off into cover. I usually speak with them if I see them. These mice eat mostly plant matter such as seeds, herbs and bulbs, but will also catch insects. In gardens and fields they can do some damage if they reach high population levels. In nature they are kept in line by a vast variety of predators: owls, eagles, hawks, falcons, wild cats, foxes and jackals, mongooses, snakes and more. These poor little mousies are pretty low down on the food chain.


But like most other rodents they breed fast enough to recover from all these depredations. They are not as prolific as some other rodents. A typical litter would consist of five pups. They grow rapidly and are sexually mature at the age of five to six weeks. The breeding season is from spring until autumn, and pups born in a season can therefore have litters of their own before the season is over. Here is a lovely photo of a mousy family.


A study of these mice was done in the Succulent Karoo region of South Africa. Here they live in groups, and breed communally, the fathers caring for their offspring and sometimes females even nursing babies that are not their own. This system is different from how mice live in other regions, where they live and breed solitarily, the females raising her offspring alone. To me one of the most interesting things in nature is the factor of behavior and how animals can alter their behavior and by this means new patterns and systems of living can arise. This can then lead to genetic diversification as well. There are indications that these and other mice from dry regions in Southern Africa may constitute a different species from four-striped grass mice in the moister grasslands and savannahs.