An Englishman in Rome

Rome is different from Vienna in that it seems to know itself. Because of this, though, you'd expect the people to be smug and arrogant, but this is generally not the case. For the most part I found them very friendly and welcoming. Mind you I've mostly only dealt with those working directly with the tourist trade, and there're a lot of tourists. I've never been to Rome before, I don't even know anyone there so planning the trip was a lot harder than my trip to Vienna. Plus this time we were going over for a wedding in the outskirts and would only have one free day in Rome itself. So a tour guide book was purchased, read, and then generally ignored. However it came with a lovely discreet map.

There's a few things though that everyone who has been to Rome, and every tour guide you can buy, warns you about, and that paints a very dark image of the city:

Pickpockets are rife!! You *will* have your wallet stolen.

Actually, no I didn't. Although to be fair I did see at several times people that looked like they may well be trying a few of the old scams, such as groups of kids who surround you holding up cardboard signs and then pick your pocket as you try to read the sign. But it's a major European city that attracts lots of tourists, of course it's going to have pick pockets.

Bag Snatchers are on every street!!

Nope, didn't see any of those. Didn't even see anyone who might be one.

The scooter riders are mad!!

Maybe, but the car drivers were worse. But neither were actually that bad. Traffic lights seem to be optional for the most part. Scooters will wind their way to the front of the queue up on the pedestrian crossings, cars may stop. Usually they will, but don't rely on it. In the smaller streets, it's the pedestrians who are the problem. Especially in busy tourist areas, where they'll walk down the middle of the road. But everywhere we went, yes the cars drive a bit fast, yes they get very close, but they always slowed down for pedestrians.

This is another one where you can see why it may be said, but you can't help but think it's blown out of proportion. There are people sleeping rough outside the main Termini Station, but it isn't as bad as I was led to believe, perhaps three or four. It used to be a lot worse outside Kings Cross. But I did see people just wander to the side of the main entrance and in full view of everyone drop their trousers and go to the loo. And not just for number ones. First thing in the morning, the place absolutely stinks of stale urine. The forecourt of the station isn't that well lit, and it does seem to be the congregating place for those with nothing else to do, and no money even if they did. There was even a fire going to keep people warm on the streets at night, fuelled by the day's newspapers.

I'll give them this one, there are quite a lot of beggars about. But I live in Manchester so I'm used to that. At least in Rome they're usually very quiet and just shake the odd beaten up Pringle tin, unlike back home where they repeat the same few notes badly on a tin whistle and claim to be busking.

But as I said before, Rome is a major European capital city, it will have these problems. But if you aren't stupid, they're not likely to be problems. As with any city you're unfamiliar with, keep to the main areas, keep your money out of sight, keep one hand on your wallet, and don't allow yourself to become distracted. Doesn't matter if it's Rome or anywhere else, so I think that maybe Rome has got itself a bit of an unfair reputation, or maybe I was indeed just lucky.

Once you get past the horror stories, you can actually start to look at Rome and take it in. Which takes a while because to start with there'll almost certainly be something that niggles about the place, something that you can't quite put your finger on but makes it seem slightly different.

One thing I seem to always look out for is the tagging, that useless graffiti where kids scrawl their names on buildings like cats marking their property. And the tagging isn't at all bad in Rome either, there's the usual cases in along the railway lines, and the dust carts parked up overnight seem to be fair game. But while the occasional more modern street furniture gets the odd spray, the older buildings are left well alone. I think this goes back to the identity that Rome seems to know it has. Anything new is a target, but they understand how important their city and its buildings are, and they seem to respect that.

We spent the day wandering around the main tourist sites in Rome, the ones you don't have to pay to see from the outside. There's a bit of a relief and freedom to be gained by knowing you can't fit everything in, so not even trying to. You can just walk and look, and enjoy. I would very much recommend starting out early in the morning. Most things are open early, but the tour busses and street traders (as well as the beggars) don't start up until about 10:30. And when it comes time to eat you can just pick a restaurant that you're passing and grab some lunch. The restaurants are in most side streets, some streets are more abundant with them than others, with the tables spilling out into the road so you can sit and eat as cars go by, so make sure it's a quiet street. This does of course only really work when it's sunny and not windy. The waiters speak English well but can seem very obsequious. 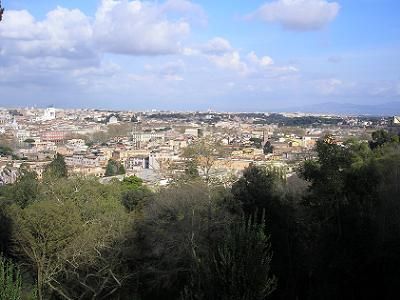 After lunch we took a walk up Gianicolo Hill to the west of the Tiber river and looked out over the panorama of the city of Rome. It's only then, and only after a few minutes that it sinks in what makes Rome different. There's no sky scrapers. In fact, there's no obviously modern buildings at all. There's nothing less than 300 years old to the trained eye, and to the untrained eye it all looks a lot older. This then also drives home that there are very few multinational chain stores. In the designer clothes district there's the usual brand label stores, but other than that there's very few names that you'd recognise. We spotted one Burger King, two McDonalds, two Spar shops and three Subways, but that was it. Italians love coffee, I didn't see a single Starbucks while there. They refer to instant coffee as "American" by which I can only assume that the only American coffee they've tried is Starbucks, which isn't a fair representation.

The impression you're left with, if you take your eyes away from the sights, is a city and a people that are comfortable with where they got to a couple of centuries ago and haven't really seen much point in progressing anywhere fast. They know their city is lovely, and they're happy to keep it. There's no redevelopment for the sake of it. They're relaxed and they’re stylish, and they seem generally happy and friendly. At first this does come across as being a bit smug, or a bit patronising, but if you make the effort and are friendly back you realise that this is genuine friendliness. All the Italians that we met were genuinely friendly, from the waiter at lunch who promised us a very good meal and delivered it, to the bar owners in the evening who were keen to invite us back the following night when they had some Blues and Jazz on.

Everyone was very welcoming, keen to take you in as one of their friends, one of their family, and to look after you and make sure that you had a good time. As an Englishman abroad this seemed very strange, but if you can throw off the inhibitions and just be open and warm back, you're almost certainly guaranteed to enjoy yourself with these friendly people.