No matter what you write about – fact, fiction, persuasive essay – you're using your own connection to reality to do it. In some way, you're mining your own memory.

Then said he unto them, Therefore every scribe which is instructed unto the kingdom of heaven is like unto a man that is an householder, which bringeth forth out of his treasure things new and old.   – Matthew 13:52.

Like that, yes. Where did I get that quote from? Sure, from the Bible app on the internet. But first, I got it from my own memory. I learned to read with that book.

If I were to tell the story of the first moon landing, I'd probably do a lot of research, just to get all the facts right. I might even read some of the excellent Guide Entries available on Apollo Missions. Inevitably, though, I'd also draw on my own memory, because I was on Earth when Neil Armstrong was in space. And I remember the event vividly, from my own perspective as a teenager.

I almost missed seeing it because of the Baptists. And thereby hangs a tale.

Old Baptist joke: Two little boys, best friends, are riding their bikes around town. They come to the Catholic church. The boys respectfully stop their bikes. One of them crosses himself and says a Hail Mary. They ride on.
When they get to the Baptist church, they also stop. The other boy scratches his head, looks at his friend, and shrugs.

Then he salutes the church and calls out, 'One hundred more in '64!' (Slogan of that year's membership campaign.)

1969 was a banner year for over-organised religious people: The Crusade of the Americas. There were planning guidebooks. It was a big deal. All over North and South America, people would be canvassing, meeting, praying, and singing a rather awful song that began, 'From the coasts of the Atlantic, to Pacific's sunny shore, comes a mighty proclamation. . . ' It was fun, mostly. You got to meet people, it wasn't contentious, or anything, and a lot of good food was served. I didn't mind spending my summer helping set up tables, playing piano, and such. Until the night of 20 July, that is. Then it turned into a crisis.

Crusade of the Americas meant that there were 'simultaneous revivals' going on everywhere. A revival, children, is a week of evening church services, about an hour long each, involving singing, praying, and preaching. It's usually led by a guest preacher. People get tired going to church every night, but it's fun to socialise. The problem is, you've got to host – and feed – the guest preacher. In our case, there were two of them.

Our church, which believe it or not was between Mars and Moon Township, near a place called Zelienople, was tiny. Our two preachers – charming guests, both of them – were being housed in the brand-new Motel 6 beside the nearby highway. But early every evening, my mother had them brought out to our house, a half-hour drive away, so that she could feed them.

And what meals they were. Ah, the days before Frankenfood and celiac disease. We ate like kings. Fried chicken one night, a pot roast the next. Even her Salisbury Steak (hamburger in luscious gravy, to you) was to die for. Fresh vegetables, pies and cakes for dessert. Great food, better company. Our song-leading preacher, a young man, was fresh out of the US Army's military police. He had tales of serving in Berlin at Checkpoint Charlie, and was delighted to try out his German on me. We talked and ate, and were happy.

Then came Sunday. It was the last day of our revival, but the first of the Big Revival – the city-wide bash being held in Syria Mosque, an auditorium in the university section of Pittsburgh. The deal was: Sunday morning, worship service. Home to our house for a celebratory lunch and nap. Snack, followed by trek to Oakland for more Crusading in the Mosque. (Pittsburgh's ironic like that, you get used to it.)

Of course, Neil and Buzz picked that Sunday to land on the moon.

Our songleader, my sister the future physicist, and I were in agony. While the crusading Baptists in our group napped, at ease in Zion, as it were, we three stayed glued to the TV set. By afternoon, we heard, 'Houston, Tranquility Base here. The Eagle has landed.' We rejoiced – and, as Buzz Aldrin requested, said a prayer of thanks – but were eaten up by fear: what if they stepped out of the LEM before the Crusade finished in Oakland? Armstrong might step out of that vehicle and onto the lunar surface, and we might still be singing hymns. We secretly prayed that he would not.

[Official history update:] Unbeknownst to us at the time, but now known to history, we were having help from angels and atheists.

They had technical things to do. They were eager to get out there. We were eager for them to get out there, too, but first we had to go and sing, 'From the coasts of the Atlantic. . . ' when what we wanted to be singing was, 'God of Earth and Outer Space'. We fidgeted all through the service – a grown man and two teenagers. We bit our nails through the sermon, not one word of which I remember. The second the last 'Amen' sounded, we raced for the car. Our preacher friend turned on the car radio – we wouldn't have dared – and said what we couldn't have said, 'Thank the Lord! They aren't out yet. Mr G, drive as fast as you can.'

He did. We somehow managed not to get stuck in Millvale, village of vertical cobblestone streets. Our friend practically leapt out of the car. We followed on his heels. As my mom put on the coffee, we switched on the set, holding our breaths.

Less than ten minutes later, I swear, the greatest Scots Irishman in history stepped off that ladder. And said, 'One small step for [a] man, one giant leap for mankind.' We had tears in our eyes.

That, children, was the most religious experience I had in the summer of 1969.

So of course, if I write about space history, I'll check all my facts. I'll consult sources, as I did when writing this. I'll use the internet to its full capacity. But you know? I couldn't ever write about Apollo missions without remembering exactly where I was that evening. And what it felt like. I swear I can smell the summer air, my mom's cologne and my dad's aftershave. That is was it is to have something locked into your memory. You can visit it at will – and when you write about the past, it's there. Perhaps far under the surface, but somewhere, it's going to be there.

Just as I privately think the angels delayed the first lunar EVA, just because a bunch of Baptists were, in the immortal words of TH White, 'praying to the vision behind its back', so I also believe that some good angel saves these memories for each of us. I believe that sharing them is our way of saying thank you that we have memories to mine. 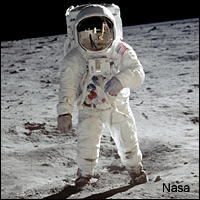