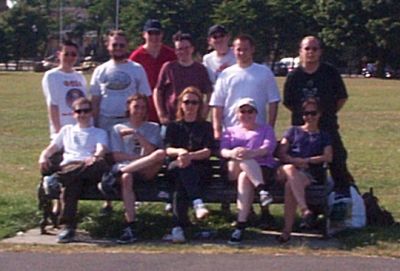 On Sunday the 19th of July 1999, a group of h2g2 researchers came together on London's Clapham Common to play a game of rounders.

Back row, left to right:

The Onion's horoscope for Taurans that day read, 'Your attempt to get your own chapter in the history books will provide an interesting case study for the medical books.' This turned out to be prophetic: h2g2's Edited Guide is now cited in medical books.

Some of the headlines in legitimate newspapers were:

For Many American Tourists, Time Travel Has Become Real

That last headline was about re-enactment holidays.

Some people might have missed an important story, though. The earth-shaking headline read:

The story was brought to an astounded world by The Digital Village and broadcast live on the BBC: the first Researchers were signing up to write the Guide.

Here's what TDV had to say:

Taking inspiration from the original Hitchhiker’s Guide to the Galaxy, Douglas Adams's cult, fictional guide to "Life, the Universe and Everything", h2g2 aims to create a real guide, where real information will be stored for future generations to browse. There are further exciting plans for the integration of h2g2 with handheld devices, as used by Ford Prefect 21 years ago, taking fiction into fact one step further.

The imagination, intelligence and wit of Hitchhiker's are clearly mirrored in h2g2. It is, in short, for people who think the world is a small place.

Fourteen years later, we still have exciting plans. And the British Library is archiving our real information 'for future generations to browse .'

Here's what one of the first Researchers had to say:

I joined h2g2 on March 19, 1999. I can prove it, too. Okay, okay, I really registered on Opening Day, April 28, 1999. Because I was registered with the Starship Titanic website I somehow ended up with a pre-assigned User Number.

Thanks, Witty Moniker. We're glad you all joined that day – and have hung around to show the rest of us how it's done.