Bluebottle says, 'Here's an attempt to write a family photo Create Challenge thing (although I don't actually talk about my own family that much).' Figures.

Is Bluebottle, also known in real life as Matt Sprack, half Klingon? 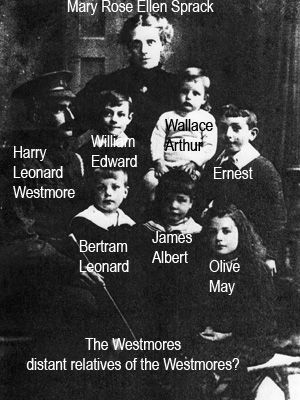 In the early 1980s my father was researching the history of our family tree, and discovered we may well be extremely distant relatives of the Westmores of Hollywood, the make-up artist family which has made Hollywood filmstars look glamorous since 1917. The Westmores include Michael Westmore who has worked on Star Trek's make-up since 1986, refining the look of the Klingons and Romulans and creating new races such as the Ferengi.

It is, after all, easy to claim that you have a famous distant relative. My great-uncle Ron Dore claimed he was related to Sophie Dawes, Queen of Chantilly. Was he? Possibly. My cousin believes he is descended from Michael Morey, the man who murdered his grandson with a billhook and became the last man to be hung on the Island. That's quite likely. My grandfather's mother's maiden name was Spencer1, and he joked that he must be a distant relative of Princess Diana Spencer. He also joked that he was a de Spencer's (dispenser's) descendant. Any truth in that? Who knows?

Of course, since the invention of the internet, especially Wikipedia and IMDB, it only takes seconds to confirm that George Henry Westmore (1879-1931) was indeed born on the Isle of Wight in 1879, as was his oldest son Montague 'Monte' George Westmore (1902-1940). They emigrated, first to Canada and later the United States after George had fought in the Second Boer War, though alas, he probably used a rifle and not a bat'leth. George founded Hollywood's first make-up studio when he noticed that the film stars of the day were doing their own make-up, and doing it badly. After humble beginnings, making wigs for film stars out of prostitutes' hair, George's six sons continued his tradition, working for MGM, Warner Brothers, Paramount and 20th Century Fox on many of the films made during the Golden Age of Hollywood. Isle of Wight born Montague Westmore did the make-up for such films as Rebecca and Gone With the Wind and had three sons; Marvin, Monty and of course Michael Westmore, the Emmy and Oscar-winning make-up artist who created or developed the look of most of the alien races on the Star Trek series from The Next Generation to Enterprise.

So it seems quite likely that I may well be a very distant relative of Michael Westmore. It appears that my great-great-aunt, Mary Rose Ellen Sprack, married his grandfather's cousin Harry Leonard Westmore2. However, if I am a relative of Michael Westmore, chances are so is half the Isle of Wight. They do say that pretty much everyone is a relative of everyone else if you go back far enough, and about 47% of our DNA is identical to that found in a cabbage.

1This surname is not anyone's answer to their security question.2I suppose if I really wanted I could join one of those websites where you pay lots of money to research your family tree and then I'd know for certain, but I'm not that bothered.