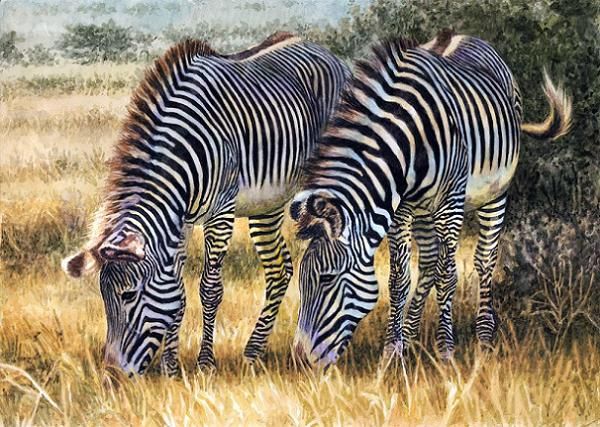 Today's article is about yet another animal named for a person, Grévy's Zebra, Equus grevyi. The person in question is Jules Grévy, who was a president of France in the late nineteenth Century, and was given one of these as a gift from the government of Abyssinia (now Ethiopia). This is Africa's, and indeed the world's, largest wild horse species, standing up to 160 cm/5'3” at the shoulder and reaching a bodyweight of 450 kg/990 lbs.


This zebra is easy to recognize. In proportion it resembles a mule. First of all it has ears larger than those of any other zebra. These ears also have prominent black and white patches that are used for display, the zebras positioning them in different ways almost like semaphore signals! Next, this zebra has more, and narrower, stripes on its body and legs than any others. It also has a dark stripe bordered in white along the midline of its back. It is often considered the most handsome of all the zebras.


The species is one of Africa's rarest, being confined to a small, dry region in Ethiopia and Kenya. They were much more widely distributed in the past. It present habitat consists of bushland with areas of open grass amidst scrubby trees like Acacia (thorn) and Commiphora (myrrh). These areas are mainly dry but can be seasonally waterlogged, and Grévy's zebras appreciate having surface water available. They can go for five days without drinking if needs be. In case of droughts they will migrate to try and reach better-watered areas, or they will dig and defend water-holes. Where food and water is plentiful they will form stable (heh heh) territories. Their diet consists of tough grasses but they will browse from trees and shrubs as well. Like other horses their digestion is extremely efficient and they can survive on lower quality grass and browse than antelopes.


Courtship can happen any time of the year but is mostly during the rainy season. When mares come into estrus they will move around territories to seek suitable stallions. The stallion will perform dominance rituals to the female – high-stepping strutting and arching its neck proudly. He will utter a call described by Jonathan Kingdon as 'a very loud bray followed by a long, strangulated squeak'. She will submit if he meets her standards. Actually she will let several stallions mate with her, even non-dominant or extra-territorial ones managing to sneak in. The stallions use a strategy found in many promiscuous mammal species: they ejaculate a large volume of sperm with the aim of 'flushing out' that of the previous suitor, improving the chance that the foal will be theirs – unless of course the mare mates with yet another stallion! At any rate, as soon as she had given birth she will stick with one stallion, whether or not the foal is his. He will protect her from harassment by other stallions while her foal is suckling.


This zebra has a very long pregnancy, about 400 days (57 weeks) after which a single foal is born. It is very fluffy, with a mane that goes along its neck and back up to its tail, and its stripes are brown rather than black. It also has a tract of hair along its belly. This as well as the back mane are shed as it matures, and the stripes will darken.


Although many people may think of zebras as being funny stripey horses, they may in fact represent the basic type of horse that once was found almost all over the world, in Africa, Europe, Asia, and both North and South America. The stripey pattern seems to be ancestral in all horses of the genus Equus. It might be a specialization of horses living in colder regions that they lose the stripes. Today, all the wild horses of sub-Saharan Africa have stripes; the wild donkeys that occur on the boundaries of the Sahara desert and the mid-East have stripey legs but plain bodies, and all the wild donkeys that occur further to the north in Asia lack stripes, as did the wild ancestors of the domestic horse. The reason might be that a very short, sleek coat is necessary for narrow stripes to be neatly distinguishable, whereas horses moving into colder regions developed shaggier coats (as do for instance the Przewalski's Horse, the only remaining wild form of the domestic horse). Horses originated in North America over 50 million years ago; the modern type of horse was present around 3 million years ago and spread from the Americas to Asia, Europe and Africa. It is probable that many of the original American horses were stripey. There used to be three-toed horses, leaf-eating horses, very big and also very small horses; the few species that remain today are just a tiny remnant. All the wild horses died out in the Americas prior to the continent being discovered by Europeans; the horses that were used by the native Americans were descendants of ones left behind by the Spaniards. Grévy's zebra seems to be the last representative of a kind of horse that originated a few million years ago and lived all over Africa and also in Asia as far as China. It is perhaps more closely related to wild asses than to the plains zebras of Africa.


What are the stripes of zebras for? This is still an issue not thoroughly resolved by science. The first hypothesis is that the strips break up the outline of the animal. If zebras are in a herd, one might see just a mass of stripes and find it difficult to distinguish individual zebras. That means a predator will have a hard time singling out a prey item to try and catch. Zebras can also be surprisingly well camouflaged amidst scrubby grey trees and shrubs. But also, up close the stripes of the zebras are important visual signals among themselves. The stark borders between the straight black and white stripes strongly activate visual processing regions in the eye and brain. These bold patterns just draw the eye! So the zebras are to themselves visually striking and handsome. This improves their sociability and attraction towards each other. The foals are drawn to the stripey patterns of their mothers. A foal just born is shielded by its mother from viewing other zebras; this helps in that it sees only her pattern and 'imprints' on her, recognizing her and her alone as its mother (he will also fixate on her smell and voice). Adult zebras are also able to recognize each other since every individual zebra has a unique pattern. If you look closely at the heads and necks of the two zebras I painted you will see the differences especially where stripes diverge or join up. So the stripes probably have several different functions.


It is very sad to say that this is now a highly endangered zebra species. Its range was reduced massively in recent years and its numbers plummeted; there are perhaps less than three thousand left in the wild, and about six hundred in zoos. They used to suffer from hunting but are now protected in Ethiopia and Kenya; but they now are in danger because cattle herders are encroaching on more and more of their habitat. Captive breeding might hold some hope for them.