It's a new year, folks. Time to be forward-thinking. Yeah, right.

Back to the Future 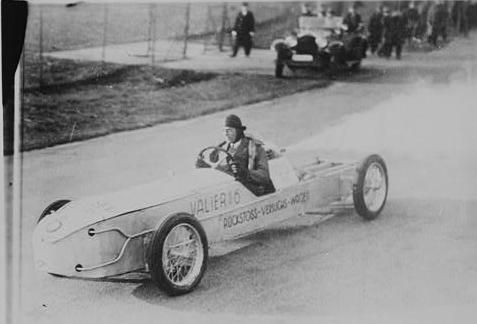 We quote the Library of Congress, that source of all knowledge that isn't already on h2g2:

Valier was Austrian, take note, being considered one of the premier scientists to come from South Tyrol2. He lived from 1895 to 1930, which makes us wonder about the Library of Congress' caption. Unless he did this posthumously. According to that other reference work, the test of the rocket car took place on 19 April, 1930. Unfortunately, Herr Valier was killed a month later in Berlin.

How? You want to know how he was killed? Oh, all right: the rocket car exploded. What did you expect? Visionaries live dangerous lives. Valier's pioneering work helped put us on the moon, though.

Anyway, it's New Year's, and we think of the future. May all your projects go swimmingly, and may 2013 hold adventures beyond your wildest dreams! (And may none of your vehicles explode.)

1Yes, even German speakers think this is ludicrous. How many f's can one word need?2Yes, that's where the hats come from.